Returning for its sixth season in 1993, Red Dwarf underwent the largest shake-up to its basic premise since its beginning. Writers Rob Grant and Doug Naylor decided that the crew had things a little too easy living on a five-mile-long spaceship with absolutely tons of supplies, so devised a storyline in which Red Dwarf - and thus Holly - disappears whilst the crew are on an away mission and they have to chase after it in Starbug with not much in the way of food and water. 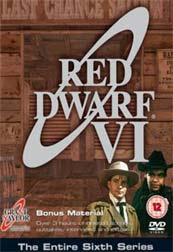 Psirens introduces the new situation with a cold open with Lister being revived after 200 years in cryo-sleep. Since he is temporarily amnesiac, Kryten has to re-explain the show's premise to him, thus providing a handy jumping-on point for new viewers. The episode has Starbug stumbling across a graveyard of ships and asteroids infested with 'psirens', hideous insectoid creatures that lure passers-by onto the rocks and then suck out their brains ("Just like Ulysses and that ancient Turkish myth!" - Lister). It's a creepy and dark episode with some decent ideas, a few good laughs and some nice guest spots from the likes of Anita Dobson and Richard Ridings (soon to be seen in Game of Thrones), but it feels a bit off. The episode suddenly resets Lister's character back to being the undeveloped slob of earlier seasons as if the last five years never happened, which is weird. On the other hand, there is a long-awaited new job for the Cat, with his superior reflexes making him a natural pilot for Starbug, which is a welcome move.

Legion sees Starbug taken aboard a vast space station whose only inhabitant is the enigmatic, brilliant and eccentric humanoid Legion. Legion is initially friendly, solving the crew's supply problems and giving Rimmer a new 'hard light' drive allowing him to interact with solid matter again, but obviously turns out to be a bit of a mentalist nutjob (what a surprise) whom the crew have to engage in battle. This is a reasonably funny episode featuring some excellent CGI and a good hard SF idea about gestalt intelligences, but is let down by some rather over-obvious slapstick in the finale.

The Emmy Award-winning (no, seriously) Gunmen of the Apocalypse is the strongest episode of the season by far. The crew run afoul of a warship belonging to rogue simulants and engage in a pitched battle to the death (Starbug having been upgraded with laser cannons to give it a sporting chance) that ends with the ship being infested by a computer virus. The crew use a VR interface to go into the ship's systems and battle the virus, a fight embodied as a Wild West showdown. It's a pretty bizarre idea but works brilliantly, with a genuine Wild West re-enactment town in Kent providing some surprisingly authentic atmosphere. A classic.

Emohawk: Polymorph II is the sequel to Season 3's Polymorph although it also sees the return of Ace Rimmer (from Season 4's Dimension Jump) and Duane Dibley (from Season 5's Back to Reality) after the crew enrage a bunch of GELFs, who dispatch a new, more capable version of the polymorph after them in revenge. There's some funny stuff in the episode, most notably when Lister has to marry a GELF to get a vital engine part, but the latter part is less successful simply because the episode re-uses a bunch of gags from those earlier episodes. It's the first in what will later become a worrying trend, namely the recycling of old ideas rather than the pursuit of new ones.

Rimmerworld sees Rimmer forced to abandon ship in an escape pod that crash-lands on a planet 600 years away from rescue (thanks to time dilation). As the pod is equipped with emergency cloning and terraforming equipment, Rimmer is able to create his own verdant paradise world and populate it with, erm, himself. Again, this is a decent episode with some funny lines and a good central premise, but there is also a strong sense of deja vu, as this is similar ground to Season 6's Terrorform.

Out of Time ended the season on a completely jaw-dropping and shocking note back when it first aired. The crew gain control of a temporal drive which allows them to travel in time. They encounter their future selves from fifteen years hence, and discover that the ability to travel anywhere they want in time and space has given them enormous power...and power corrupts. It's an excellent idea which is genuinely unsettling and the episode has an unusually doom-laden atmosphere to it building up to a huge cliffhanger ending.

And then...nothing. Several months after filming of Season 6 was completed, lead actor Craig Charles became embroiled in a major scandal that led to police charges being filed (Red Dwarf had made Charles one of the biggest names on TV at the time, and he enjoyed the rock 'n' roll lifestyle a little too much, something that later came back to trouble him on Coronation Street as well). He was eventually fully exonerated, but it took a long time for him to clear his name. At the same time, the writing relationship between Rob Grant and Doug Naylor unfortunately broke down and their partnership split. Rob Grant left the series to start writing novels, whilst Doug Naylor became the sole writer and flag-carrier for the series.

Eventually, Red Dwarf returned for a new series in 1997, but it was a very different show to what had come before. But I'll be covering that in due course.

This season saw a marked change in the series. Still watchable and still funny with brilliant production values (for a BBC show in 1993, anyway), there was more trading on past glories than the exploration of fresh new ideas, and a much greater reliance on running gags. Lister, having been set up as a pretty canny guy over the previous five seasons, was also reset into a slightly dim slob, which wasn't really fair to the character. However, the performances remained strong, Gunmen of the Apocalypse is a classic episode and the cliffhanger ending is still startling today.