Picking up where the first season left off, the mining ship Red Dwarf is lost in space, three million years from Earth, the crew killed in a radiation leak. The only survivor of the crew is Dave Lister, who was in suspended animation during the incident. He fellow crewmembers are a creature that evolved from the ship's cat, the Red Dwarf's increasingly eccentric AI Holly, and a computer-generated holographic representation of Lister's dead bunk-mate, Arnold Rimmer. 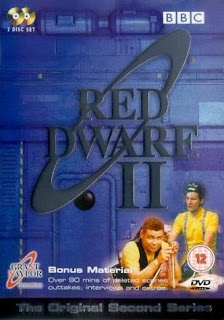 After an uneven first season, Red Dwarf returned for its second just a few months later in 1988, and it feels almost like a different show. The writers and actors are all much more confident and relaxed, there are more effects shots and some location shooting and the show's characterisation really kicks in this year with a more thorough exploration of the characters and what makes them tick then we saw in the first year. There's also a subtle widening of the series' scope, with the introduction of the idea that there are other wrecked spacecraft out there they can loot and also the first appearance of several key ideas, such as parallel universes and advanced virtual reality systems, all of which allows for other characters to appear without violating the core concept at the heart of the show (four guys marooned in deep space).

The first episode, Kryten, sets the scene for this new era in style. The crew receive a distress call from the Nova 5, which has crashed on a nearby moon leaving only three injured female crewmembers and their service mechanoid, Kryten. The crew manfully come to the rescue only to find that Kryten is a bit loopy and hadn't realised that the 'injured' female crewmembers were actually dead. They rescue the distressed robot and Rimmer sets him to work, to Lister's annoyance and the latter sets about teaching Kryten how to rebel (mostly by making him watch Marlon Brando movies). This is a great episode with some genuinely brilliant moments of comedy and a sterling guest performance by David Ross as Kryten. Fan reaction to Kryten was so positive that he was brought back as a regular, with a change of actor, the following year.

Better Than Life sees the crew receive a mail pod from Earth (three million years being about the average delivery time for second-class post) including various movies, letters and video games. Rimmer learns that his father is dead - well, he already knew that, but getting a letter about it brings it home - and the crew decide to check out the VR game 'Better Than Life', which makes all your deepest fantasies and desires come true. The only problem is that it's not really meant to be played by someone with as many emotional insecurities and hang-ups as Rimmer. Hilarity results.

Thanks for the Memory is one of the show's most underrated episodes. The crew wake up to discover the last four days have gone missing, and they have no memory of how Lister and the Cat broke their legs or what has happened to the ship's black box. This sets up a clever mystery which leads to a surprisingly emotional resolution. This and the preceding episode do a fantastic job of exploring Rimmer's character and bringing some much-needed depth and sympathy to his role. They're also early examples of episodes which feel exhausting, as the writers cram so many ideas and so much plot into the episodes that they feel much longer than their 30-minute run time.

Stasis Leak is a bit of an oddity. The premise that the crew have found a rent in space/time which allows them to travel back to three weeks before the accident is solid, but oddly no-one suggests trying to avert the accident or even just using the rent to return to their original time, lay low for three weeks, and then return home to Earth once the events of the series have been set in motion (thus preserving continuity). Instead we just get a storyline in which Lister tries to get Kochanski to evade accident and Rimmer tries to save himself. There are some funny elements to the episode and some great lines, but it's an episode where the ideas don't quite gel together satisfyingly (not to mention the sins it commits against the series' timeline, but seriously, that's not something you should be worrying about as a viewer of Red Dwarf).

Queeg is a rare episode (one of only two in the whole series) that focuses on Holly. Holly's increasingly erratic behaviour sees him replaced by Red Dwarf's hitherto unknown emergency backup computer, Queeg 500. Queeg rules the ship with an iron fist, forcing Cat and Lister to work for food and almost killing Rimmer by sending him for marathons around the ship. Eventually, Holly (relegated to a job as night watchman) attempts to retake power, with unexpected results. It's a strong episode that plays on Norman Lovett's under-utilised comic talents.

Parallel Universe sees the Dwarf accidentally teleported into a neighbouring universe which is exactly the same as ours except it is more 'female-oriented' (although this is apparently not quite accurate since the masculinist movement of the 1960s, spearheaded by Jeremy Greer's The Male Eunuch and men burning their jockstraps). Cue some rather obvious gags, but there's a great moment when Rimmer's hitherto disgraceful attitude towards women is turned against him. In a great continuity nod, there's a cliffhanger ending that also addresses the question from Season I about how Lister is supposed to have children in the future with no women on board.

Season II represents a significant improvement in quality over the first year. Performances are stronger, production values (whilst still not great) are much-improved and the scope of the show is opening up. The strongest moments, though, are probably the discussions between Lister and Rimmer about such things as Rimmer's father, Lister's ex-girlfriend and the perils of tax evasion and the dangers of AI-controlled shoes. However, the sets are still a bit cardboard and unconvincing, and the quality of the guest stars is a bit mixed.

Red Dwarf: Season II (****½) is vastly improved over the first season and sees the series becoming a genuinely funny and entertaining show with moments of real drama and pathos as well. It is available now on DVD in the UK and USA.
Posted by Adam Whitehead at 17:17