Thirty-eight thousand years in the future, the Galaxy is gripped in a constant state of warfare. The million worlds of the Imperium of Man are under constant attack from hostile alien races. Whilst the billions-strong army of the Imperial Guard holds the lines, it is up to the thousand chapters of the genetically-engineered, highly-capable Adeptus Astartes, the Space Marines, to take the offensive. 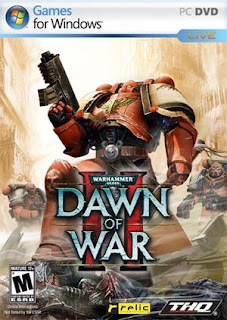 In one small corner of the Imperium is sub-sector Aurelia, the three major worlds of which - Calderis, Typhon and Meridian - are the primary recruiting and base worlds for the Blood Raven chapter of the Space Marines. When the Orks mount a major assault on Calderis, the Blood Ravens respond and discover that the Eldar are trying to trigger a full-scale war between the two factions. Whilst the Space Marines attempt to eliminate both hostile alien forces, a Tyranid Hive Fleet also shows up to infest all three worlds, resulting in an exceptionally bloody battle to save the planets and their billions of inhabitants from certain death.

Dawn of War II takes place in the Warhammer 40,000 universe and is the sequel to the 2004 real-time strategy game Dawn of War and its three expansions, Winter Assault, Dark Crusade and Soulstorm. Once again, the player takes control of the Blood Raven chapter of the Space Marines and fights against various foes in the single-player campaign, whilst in multiplayer they can also control the Orks, Eldar and Tyranids in battle. The forthcoming Chaos Rising expansion will also add the Chaos Marine faction to the game. Whilst not directly controllable in battle, several missions see the Space Marines fighting alongside the Imperial Guard, who provide fire support and cannon fodder for the enemy forces.

The original Dawn of War was a satisfactorily enjoyable RTS, but it had several key problems: it was very short, the non-linear campaigns of the latter two expansions were dull and repetitive and it was very easy, particularly if you played as the Space Marines. Space Marines in the WH40K universe are one-man armies, each capable of annihilating dozens of enemies from other factions (their counterparts from the corrupted Chaos Marine faction excepted), and Dawn of War seemed unwilling to treat them in this manner or downgrade them fully to the status of just another army, meaning that they fell into a kind of halfway position where they were substantially tougher than most of the other factions in the game but also still weren't as powerful as they should be given the setting's lore. Their sheer toughness also meant they didn't need much in the way of tactics, upgrades or the addition of new units through the game. It was still possible to win the game with just the use of the basic Space Marine infantry type in the final mission.

Dawn of War II intelligently overcomes these problems by changing the single-player game entirely. It's now much more of an action-RPG along the lines of Diablo. There is no recruiting or building of new units mid-mission. Instead, you can order four units into each battle out of a pool of eventually six squads. Each squad is highly specialised in a certain field, with a heavy-weapons Devastator squad capable of laying down vast amounts of heavy fire whilst a jetpack-equipped Assault squad can drop into the midst of the enemy and engage them in heavy melee combat. This move away from strategic considerations - which were really limited in Dawn of War I anyway - to purely evaluating the tactical considerations of each engagement adds a lot to the game. Also, by removing the resource model (holding tactical strongpoints on the battle field) the game becomes one of movement, with the need to hold and defend resource-requisition sectors not slowing down the game as it did before. In addition, squads find 'wargear' (the equivalent to Diablo's loot) which they can equip between missions, such as better armour, heavier weapons or items that increase durability or damage potential. Squads also gain experience between engagements and can improve their fighting capabilities over time.

The single-player campaign is non-linear, with at any one time several missions available to the player on the three planets. If the player chooses to take one mission on one planet, enemy forces may advance on the other two, and in the case of the Tyranids ignoring one planet for too long a period of time may see it overrun and consumed. Whilst it's not exactly Total War, it does introduce interesting elements of strategy to the game. However, to avoid the problem of repetition from the latter two Dawn of War expansions, these semi-random combat and defence missions are frequently interrupted by key storyline missions which advance the overall course of the conflict.

Both the strategic map and the tactical battles work very well, and the game is considerably longer than the original. The number of missions you need to do to complete the game varies, but comes in at between 30 and 40 (contrasted to the original game's 17). You can also play the campaign in co-op with a friend, and there are numerous multiplayer options including a 'last stand' mode where you have to hold out for as long as possible against apparently infinite waves of enemies.

The game has been heavily criticised for moving away from the RTS model of Dawn of War, which I think is unfair. Dawn of War came out in the summer of 2004, between Ground Control II and Rome: Total War, and suffered in comparison to both games, not being as tactically enjoyable and inventive as the former or as strategically impressive as the latter. The game looked great and was fun to play, but it was also a bit lightweight and was far too easy. Relic have proven surprisingly intelligent and mature in realising that the Space Marines simply don't work as a traditional RTS side and constructing a new game concept that makes them shine without becoming too overpowering (since your Space Marines are often outnumbered 100 to 1 per mission, and losses can be incurred if you are not careful). It also allows them to create some extremely memorable characters in the case of the six squad commanders and their interactions with one another and their observations on life and war in the Imperium (although the ultra-cynical Cyrus really needs to get out more and chill out a bit).

There are, however, some other problems. Many of the battles take place on the same maps, which can get a bit boring the third or four time you visit them. There's also a strong sense of repetition to the early battles in the game, in which you have to fight your way across the map and kill a boss. This threatens to get tedious, but fortunately the game opens up into its more freeform stage just after this and the game becomes more enjoyable. If you're a huge RTS fan, than the absence of base-building and unit-construction may be disappointing, but conversely action-RPG fans will find a game that is much more appealing than the original. Slightly more annoying is the fact that you need both Games for Windows Live and Steam running to make the game work. Either one of these would be irksome, but having both running simultaneously takes up valuable memory (annoying with a game this memory-intensive), which is irritating.

Dawn of War II (****) is an enjoyable game with some great ideas and a solid action element to it. It's not the most original of titles, but is a rare example of developers identifying key issues in the original game and taking some pretty big steps to eliminate them. The game is available now on PC in the UK and USA.
Posted by Adam Whitehead at 16:07