Update on the new Encyclopedia of Science Fiction

Way back in 1979, SF critics and editors Peter Nicholls and John Clute released the first edition of The Encyclopedia of Science Fiction. Weighing in at 730,000 words, it was the most authoritative reference work about science fiction ever published. The second edition of the book was released in 1993, clocking in at 1.3 million words and well over a thousand pages of tiny type, and was of a size and weight that would enable it to double as siege weapon with no major problems. 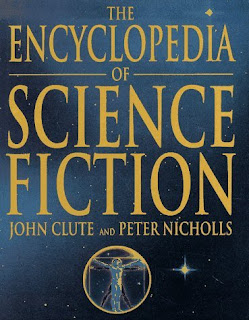 The 1993 second edition.
The third edition was announced several years ago as being a dual project, with a physical copy and also a constantly-updated online incarnation both in the offing. However, the size of the project now seems to have outstretched the abilities of physical binding science, with Orbit amicably parting ways with the editors of the new edition, who have mysteriously revealed they now have 'enthusiastic new backers' from 'outside the conventional publishing world'. Intriguing.

The size of the new book has now been revealed as a slightly staggering 2.465 million words clocking in at over 10,000 entries (compared to 6,571 in the 1993 second edition). 'Exhaustive' and 'definitive' would appear to be what the editors are going for here. Interesting to see when it finally arrives. Whereupon, no doubt, they'll be asked if they're going to do the same thing for a new edition of The Encyclopedia of Fantasy (the 1996 first edition of which is probably still the most definitive overview of the genre, despite now being badly outdated).
Posted by Adam Whitehead at 04:28