Ending The Lord of the Rings 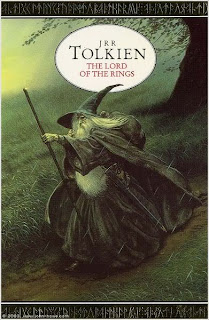 For most people, The Lord of the Rings ends with Sam riding home to Hobbiton and saying, "Well, I'm back,". Both the movie and the main text of the novel end at this point. However, both the book and, much moreso, the movie get some criticism for having 'too many endings', with quite a few moments before then where it feels like the end credits/appendices should have rolled instead. The book mostly gets around this by having the thematically vital 'Scouring of the Shire' chapter at the end, featuring the final confrontation between the Hobbits and Saruman.

However, what is interesting is that the ending of the book would have been significantly longer if Tolkien himself hadn't actually edited several more sequences out. Something that concerned Tolkien during the latter phases of writing The Lord of the Rings was reconciling the book's darker and more serious tone with the earlier, somewhat more frivolous text of The Hobbit. A second edition of The Hobbit was issued which used the darker, more murderous incarnation of Gollum from Rings rather than the more amiable trickster of the first edition, but Tolkien also felt that the underlying premise of The Hobbit, that thirteen hardcore dwarven warriors would want or need the help of a Hobbit to help them out to kill a dragon, was somewhat odd. To account for this he wrote a chapter for Rings called 'The Quest of Erebor' in which Gandalf sat down with Frodo in Minas Tirith and explained to him how he found Thrain dying in Dol Guldur and recovered his map, then many years later met Thorin and arranged the quest and why he through Bilbo could help with the mission. However, during the writing of the chapter Tolkien realised it was going off on a massive tangent from The Lord of the Rings and set it aside, finished but not rewritten to his normal exacting standards. Many years later he went back to redraft it as one of several essays he was writing on the subject of Middle-earth, and it is this version which eventually appeared in Unfinished Tales.

Tolkien also wrote an additional chapter that came after the "Well, I'm back," moment and explained in some detail what happened to each of the members of the Fellowship after the War of the Ring, and ended with Sam listening to the sound of the sea washing on the shores of Middle-earth. Tolkien, suspicious of over-sentimentality, decided this wasn't really appropriate either and pulled it out of the book, although it was finished. Christopher Tolkien eventually included it in Sauron Defeated, the ninth book in the History of Middle-earth series and the last one dealing with the Lord of the Rings era of his father's writing.

A lesser-known fact is that at some point after Lord of the Rings was published, Tolkien actually started writing a sequel, which he called The New Shadow. Tolkien's idea in this book would be that evil would return to Middle-earth and engulf the kingdom of Gondor in the Fourth Age, creating a crisis that one of Argorn's descendants would have to deal with. However, this idea does not seem to have fired his interest, possibly as it would deal with purely human villainy (so as not to contradict Rings' ending which had most of the supernatural and non-human elements of Middle-earth slowly fading away to make room for the age of men), which did not interest him as much as more mythic elements and material. The few pages that survive eventually appeared in the final book of The History of Middle-earth, The Peoples of Middle-earth.

Then of course are The Lord of the Rings' lengthy appendices, which a lot of readers skip. The first appendix deals with side-elements, such as the story of Aragorn and Arwen's relationship, whilst the second is the most interesting to a general reader, featuring as it does a lengthy timeline of the history of the Second and Third Ages (Tolkien didn't include the First, feeling that it would spoil The Silmarillion, which he was still working on) and a detailed timeline of what events took place in relation to one another in the book. Peter Jackson laudably paid attention to this timeline when making the movie trilogy, which is why some events in the second and third movies are moved around to their chronologically correct positions. Unfortunately, this did also less laudably require Jackson to introduce some weak 'filler' elements in the second movie, such as a pointless side-trip to Osgiliath, to fill in the resulting diminishing of screentime for Frodo and Sam. The later appendices mostly contain information on the languages of Middle-earth and form probably the most frequently-skipped part of the book (possibly after the poems). 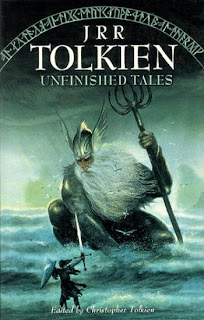 Interestingly, The Lord of the Rings' appendices (which take up well over a hundred pages of the published book) were supposed to be considerably longer and more detailed, and Tolkien despaired over their 'truncated' state. At one point he considered expanding them into a companion volume to the series and started writing a series of essays on various elements of life and history in Middle-earth, but did not get far with them before he passed away. However, many of these essays, on such fascinating subjects as the Blue Wizards, the Palantiri, the military organisation and history of Rohan, the (sadly incomplete and self-contradictory) history of Galadriel and Celeborn, and a detailed report of the Battle of the Gladden Fields (where Isildur lost the One Ring), were recovered and published in Unfinished Tales, which Christopher Tolkien published in 1983 as a sort of replacement for the mooted companion volume.

It is interesting that Tolkien did produce a lot of extra material for The Lord of the Rings which didn't see the light of day for some considerable time, and did eventually address a number of questions people had left over from the end of the book, so if you can't get enough of the original book there's still a fair bit of additional material you can track down.
Posted by Adam Whitehead at 22:46

That was absolutely fascinating post, thanks! I really need to start reading the History of the Middle-Earth series.

I am not a huge fan of his. but your post basicalt summed up alot i didn't know.

This was very interesting!

Done. That was easier than I thought it would be. Fiddling with Blogger html is always a pain in the backside.

Thanks mate! :) This makes it more convenient... I just did a Lostwatch of my own, so for season 6 rather than bringing myself to write reviews/ posts on what happens, I'll just share your work :P

Sweet! Never knew that, I was confused by the giant merman with the trident. I'm about to read the LOTR and the Hobbit because I've never gotten around to it, so this was interesting to me