A Different Kingdom by Paul Kearney

Growing up on an Antrim farm in the 1950s, young Michael Fay has an idyllic but hard-working life. However, he soon discovers that the woodland beyond the farm is a doorway to another place, a place of wonders and stark terrors which has a strange hold on his family and where he must travel to right an old wrong. 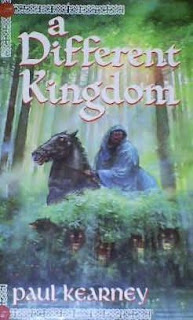 A Different Kingdom was Paul Kearney's second novel, originally published in 1993 by Gollancz. It's a stand-alone, although it shares a thematic link with The Way to Babylon and Riding the Unicorn in that it features a person from our world who is drawn into a fantastical one. Those more familiar with Kearney from his later work, such as the excellent Monarchies of God series or his recent accomplished fantasised historical, The Ten Thousand, will find the book a surprise and a revelation. This is a work that is steeped in earthy Celtic mythology and is riddled with the sensibilities of Ireland. During early sequences on the Fay farm you can almost taste the soda bread and buttermilk, whilst later sequences in the fantastical 'other place' are rooted in the earth, the musty smells of the forest and in the palpable terror of the hunted.

A Different Kingdom reaches into the same taproots as works such as Robert Holdstock's Mythago Wood, a comparison most books would not weather well, but this novel stands up to it with gusto. It's extremely well-written, with Fay a troubled and complex central character, and features an unusual structure where the story proceeds in three different periods in Michael's life and the story moves between them as he has prescient visions of his future journey into the forest as a boy, flashbacks to it as an adult and then we see it during the present. There's an element of Heart of Darkness also at work, as Michael's journey into the heart of the forest to confront an elusive enemy also becomes a confrontation with his own soul and his desires to save a family member clash with the desire to stay with a beautiful woman he meets in the woodlands.

There aren't many weaknesses. The sequence set in the future when Michael is grown-up are somewhat brief and not as well-explored as the earlier episodes, but then it doesn't really need to be. Some may find the ending also to be a little abrupt given the novel's build-up, but it still worked well and was a thematically appropriate conclusion. I particularly like the way you can't really read it as a 'happy ending' or not, depending on your interpretation of the story.

A Different Kingdom (*****) is a rich, powerful and strikingly good novel. It's regrettably out-of-print at the moment, although second-hand copies are available via Amazon in the UK and USA.
Posted by Adam Whitehead at 19:29

I'll have to look it up.