For its fifth season, Red Dwarf underwent a change of focus. Whilst the set-up and premise is still the same as the previous two seasons, the writers chose to take the show more in the direction of being a drama-comedy rather than a straight-up sitcom. The fifth season still has plenty of laughs, but they are now less prominent than before, with the SF ideas and character relationships come more to the fore. Production values, particularly the more frequent use of CGI, again improve, and the fifth season is arguably the first which still really stands up well in contrast to modern shows. 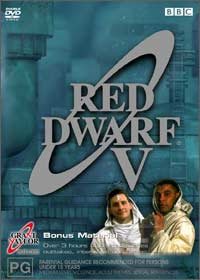 Things get off to a familiar start with Holoship, which is another Valentine's Day show (for the second season running, the season debuted on 14 February, this time in 1992). The crew encounter the Holoship Enlightenment, a wholly holographic spacecraft which is exploring the Galaxy and is crewed by the cream of the Space Corps, all top guns in their field. In the words of the captain, this is 'a ship of superhumans'. Tempted by a life of intellectual and scientific fulfilment - not to mention the ship's regulation that all crewmembers must have sex twice daily - Rimmer sets out to join their ranks, but encounters a few obstacles (most notably being an intellectual ignoramus with all the social graces of a cockroach). This is a solid episode with a great guest turn by Jane Horrocks as one of the holographic crewmembers.

The Inquisitor is the first of two unusually 'dark' episodes in the season. The crew encounter the Inquisitor, a time-travelling robot from the end of time who has concluded that there is no God and the sole purpose of life is to lead a worthy and fulfilling existence. When he encounters those who have wasted their lives, he deletes them and alters the timeline to replace them with someone more worthy who was never even born in the original timeline. Obviously, the crew of the Red Dwarf are in big trouble when he meets them. After a Rimmer and Kryten-heavy fourth season, this episode is a welcome chance for Lister to take centre stage and shine as he defies the Inquisitor in a battle to the death. This episode takes a great idea and runs well with it.

Terrorform sees Kryten and Rimmer crash on a 'psi-moon' which terraforms itself based on the psychology of the people inhabiting it. By the time Lister and the Cat arrive to rescue Kryten (alerted to their plight in one of the funniest sequences in the entire series) the moon has unfortunately adapted itself into the shape of Rimmer's mind! This is an unusually epic episode, with a ruined temple set, a swamp and a spacecraft crash site amongst its locations, and the 'making of' documentary and the cast commentary reveal just how they achieved the look of the piece on a relatively small budget.

Quarantine sees the crew exposed to a lethal holographic virus whilst on a mission to an abandoned scientific outpost. Ignoring the fact that they couldn't carry the virus anyway, Rimmer has the other three locked in quarantine upon their return to Red Dwarf. Lister's initially cheery view that it's not a problem as they spend all their time together anyway is soon put to the test as he has to spend several days and nights with Kryten and the Cat non-stop. However, even that isn't too much of a problem as the crew are soon confronted by their most demonic and evil foe to date...a psychotic penguin named Mr. Flibble!

Angels and Demons is probably the single most disturbing episode of Red Dwarf ever made. A freak accident with a 'triplicator' blows up the entire ship but creates two identical copies, one consisting of the crew's 'higher selves' (a bunch of super-intelligent peacenik hippies) and the other of their 'lower selves' (a bunch of psychopathic nutcases). As they attempt to unify the two ships together to recreate the original, they have to contend with the machinations of their lower selves who are a thoroughly unpleasant lot indeed. This episode is interesting for the fact that the audience are quite clearly rather uneasy about where to laugh and when not to. Although there are several genuinely funny sequences, there are also some seriously twisted moments, such as when Lister is kidnapped by the lows and put through a highly original method of torture involving a tarantula and a boiling kettle. It's an inventive and intriguing piece that pushes the boundaries of what you can do in a supposed sitcom.

Back to Reality is a classic episode with a brilliant, killer premise, although it loses a little of its power on DVD when you know there's another three seasons after this one. When it first aired the cast and crew were apparently despondent about there being a sixth and said at the time the show was going out on a creative high, although of course this was just to sell the idea that the series might end on as shocking a note as this one. Essentially, the crew are killed when Starbug crashes underwater and discover they've been playing a VR computer game for the last four years. Returning to reality, they discover that Lister is a senior figure in the law enforcement services for the totalitarian government ("Vote Fascist for another decade of total law enforcement!"), Rimmer is his drop-out, deadbeat half-brother, Kryten is a cyborg cop with the name 'Jake Bullet', and the Cat is a hapless, style-free dork named Duane Dibley. The episode continues the series' direction towards becoming more of a drama with some excellent writing and great ideas, although the comedy is kept alive and well through such sequences as how the show portrays our heroes in an epic car chase with the fascist cops on motorcycles carrying rocket-launchers with helicopter gunships in support, despite having no money to do it.

Red Dwarf's fifth season is still quite funny, but the move towards stronger drama and harder SF elements does make it somewhat less well-paced than the third and fourth seasons. The episodes still look great and pack a vast amount of content into their 30 minutes, and there are some nice nods towards continuity: the Inquisitor is referenced as a simulant, a similar type of robot to the one that appeared in Justice, whilst the triplicator was adapted from Meltdown's matter paddle. The characterisation is richer than ever, with Holoship and Terrorform both delving into Rimmer's character again and still finding interesting material, whilst Inquisitor gives Lister a chance to shine. The biggest loss of the season is Hattie Hayridge as Holly, who has very few lines and doesn't have much of a role (despite saving the day in one episode), leading the producers to reluctantly drop the character the following season.