Three million years into deep space, the mining ship Red Dwarf continues on its lonely voyage home. With the clearing of the ship's radioactive decks continuing apace, Lister and Rimmer have moved into much nicer officers' quarters and are also now able to use the far superior Starbug-class shuttlecraft, whilst Holly, still besotted with his female counterpart from the parallel universe, has undergone a head-sex change operation. Lister, left pregnant by a liaison with his counterpart from the same parallel universe (different physical laws apply), has given birth to twins but sent them back to their home universe. Finally, the crew have recovered the android Kryten, last seen roaring off into the void on a space-bike, from where he has crashed on an asteroid, and integrated him into the crew. 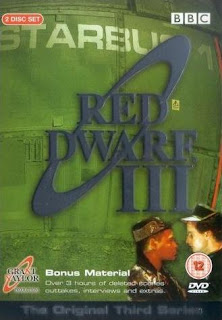 Pretty much all of the above exposition is crammed into a ten-second, ultra-fast-forwards Star Wars-style text scroll at the start of the third season of Red Dwarf, and is then pretty much forgotten in favour of getting on with some stories. For the third year of the show, creators and writers Rob Grant and Doug Naylor came aboard as producers; a new, tighter spending regime was enacted (helped by a modest budget increase) and new effects people, set designers, costume designers and musicians were hired. The character of Kryten was also added to the show permanently, with Robert Llewellyn taking over the role from David Ross, whilst Norman Lovett had departed following dissatisfaction with the length of time it took to get to work every day (he lived in Edinburgh, rehearsals were in London and filming was in Manchester).

In effect, the show had a pretty significant revamp in the third season. The show is somewhat faster-paced, there's more action and special effects and even the more sombre title music (meant to evoke a Silent Running feel to events) has been jazzed up with some guitars and drums. As a statement of intent, it made some old-school fans feel uneasy but at the time it won over a huge new audience and began to take the series to the top of the ratings.

Of course, the fact that the show starts with three sequentially brilliant episodes didn't hurt either. In Backwards Rimmer and Kryten fall through a 'time hole' and crash-land on Earth in the late 20th Century, but a version where time is running backwards. Lister and the Cat arrive to rescue their friends only to find they actually quite like things this way around, despite certain bodily functions being pretty disgusting this way around. Given that the conceptual basis of the episode is pretty straightforward - Naylor and Grant had discovered an editing machine in the BBC which could run tapes backwards, including sound - they make the most of it with some classic gags and some huge laughs. Just don't think too hard about if it makes any sense or not. I also remain convinced that Martin Amis was inspired to write Time's Arrow by this episode. Seriously, at one point Rimmer and Kryten even get into a similar discussion about the morality of WWII going backwards.

Marooned, brought in late in the day to replace another script, is somewhat more modest in scope but is even stronger. It's basically a two-hander, with Lister and Rimmer trapped on Starbug when it crash-lands (this becomes a running gag throughout the series) on an ice planet. Lister has to keep a fire going in order to survive and must also make their meagre food stores (a tube of Bonjella gum ointment, a Pot Noodle, a packet of crisps and a tin of dog food) last as long as possible. It's a brilliantly-written, expertly-acted episode (the two actors have occasionally mused doing it as a stage play) about two people who don't particularly like one another having to help each other survive a difficult situation.

Polymorph is much more overtly bonkers. A genetically-engineered lifeform (GELF) known as a polymorph has gotten loose on the ship. This creature has the ability to take on any shape or form to provoke an emotional reaction in its prey, and can then suck out that emotion to feast on it. Needless to say, the dysfunctional, psychologically dubious and highly erratic crew of Red Dwarf proves a tempting meal. This is another superb episode driven by great performances from the regulars who, heralding the beginning of another recurring trope of the series, have to play alternate versions of themselves when certain emotions are removed. The highlight is a scene where Lister is almost killed by the polymorph disguised as a psychotic kebab. Another classic sequence sees the newly-pacifistic Rimmer declaring the formation of the Committee for the Liberation and Integration of Terrifying Organisms and their Rehabilitation Into Society to deal with the creature, only to run into acronym problems.

After those three episodes, the rest of the season is less overtly brilliant, but still enjoyable. In Bodyswap Lister and Rimmer discover they can swap bodies, providing Rimmer with the first chance since his death to taste, smell and feel. Rimmer's initial plan to borrow Lister's body to get it in shape goes out the window and he ends up porking out, sparking a battle for control of Lister's body. Timeslides ("Tonight's Special Guest Star: Adolf Hitler as Himself,") sees mutated developing fluid allowing the crew to travel into photographs and thus back in time. As a result Lister tries to change his past so he never ends up on Red Dwarf, but this only causes more problems. Finally, in The Last Day Kryten's in-built expiry disc kicks in, triggered by the imminent arrival of his replacement model, Hudzen 10, and the crew have to decide how to deal with the new arrival.

The third season of Red Dwarf is, compared to its two forebears, brighter, more colourful, funnier and more varied. More action takes place off the ship, various story devices are employed to bring in other characters and the special effect and model work is exemplary, and there's a lot more of it (Starbug crash-lands in three separate episodes). There's even some primitive CGI (this season was filmed in 1989) doing the rounds. The episodes are indeed faster-paced, but they don't really sacrifice the two-hander comedy exchanges either as some fans later complained (Marooned is basically nothing other than a 30-minute-long comedy double-act and brilliant for it), although the focus does move away from the Lister/Rimmer relationship and features more scenes of them paired up with other characters.

There are a couple of problems, and they are problems that later episodes also have to deal with. The introduction of Kryten as a regular is a great idea, giving the writers a whole new character to explore, but his role as a mechanoid means that he seems to get all the exposition and explanation-based dialogue that used to go to Holly. The result is a notable drop in material, dialogue and screen time for the new Holly, played excellently by stand-up comic Hattie Hayridge. Introducing the first regular female role on the series and promptly giving her little to do does not send out a great message, although she does get some good material as the series progresses. There just isn't very much of it. This also ties into the second problem, namely that the Cat's role is also slightly reduced to make way for Kryten, and it's quite some time (until Season 6, in fact) until he gets a new role that gives him more to do in the series.

These problems cannot really challenge the sheer quality of the scripts, the hugely-improved production values and the fact that the writers and actors were on top of their game in this season. Red Dwarf: Season III (*****) is one of the series' finest hours, and worth checking out even if earlier episodes didn't do much for you. The season is available now on DVD in the UK and USA.
Posted by Adam Whitehead at 20:53