Images purported to be from Bethesda's upcoming science fiction roleplaying game, Starfield, have leaked onto the Internet. 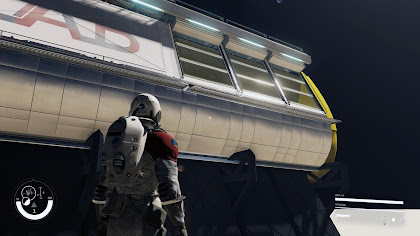 The images show a figure in a spacesuit outside some kind of modular space habitat (which may hint that settlement building from Fallout 4 and 76 may return in some fashion), and the second image shows a spacecraft. The images are reportedly from a 2018 build of the game and are not necessarily representative of the final look of the title.

The images include a look at the game's UI, which seems to have settings for gravity, oxygen and carbon dioxide, suggesting the game may implement different levels on gravity and different atmospheres on different worlds, something we haven't seen often in AAA space games.

Starfield has been in full-time development at Bethesda Maryland since 2016, although early prototyping began back as far as 2012. A second team at Bethesda Austin has been working on the multiplayer-focused Fallout 76, whilst additional teams have been helping the Maryland crew on Starfield, as well as spinning up early pre-production and prototyping for The Elder Scrolls VI (which reportedly has the working title Redfall).

Apart from a very brief teaser trailer released in 2018, Bethesda have kept quiet about the game. Vice-President Peter Hines has recently confirmed that Bethesda will not speak further about the game until 2021 at the earliest. Given Bethesda's preference to do a "big reveal" of a game only 3-4 months ahead of release, it's possible that this may indicate that the game itself could be released by the end of 2021.

Bethesda was recently acquired by Microsoft for $7.5 billion, leading to the possibility that Starfield and all future Bethesda projects will be exclusive to the PC and Xbox platforms, although they have agreed to honour promises that in-development games already announced for the PlayStation will be released on that console.

Bethesda have not yet commented on the leaks, although they have deleted the images from their own social media channels and forums.