Hasbro has resurrected the long-defunct Hero Quest board game IP and is set to make a big announcement on the game on 22 September. 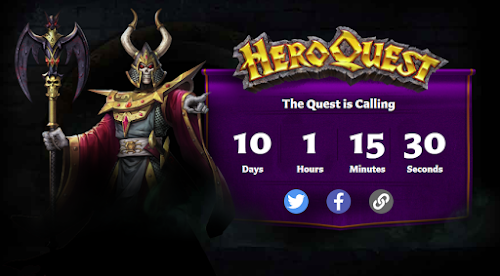 Hero Quest is a board game franchise that was created in 1989 by Milton Bradley Games in collaboration with Games Workshop, who provided the game's excellent miniatures. The game was set in a traditional fantasy world and saw up to four players create an adventuring party and enter a dungeon, which was laid out and prepared by another player serving as the Games Master. The game used a clever modular board design to provide for hundreds of possible dungeon layouts without spilling over an entire desk (something modern board games sometimes struggle with), and it was possible to play the dungeon adventures as stand-alone quests or sequentially to form a long-running campaign.

The original Hero Quest game was supported by a substantial number of expansions: Kellar's Keep, Return of the Witch Lord, Against the Ogre Horde, Wizards of Morcar, The Frozen Horror, The Mage of the Mirror and the Adventure Design Kit. The board game and expansions sold extremely well for three years, but the line ran out of steam in 1992 and was cancelled. Games Workshop published their own version of the game, Advanced Hero Quest, along with an expansion called Terror in the Dark, in 1991 but these were not as successful as the main line.

There were also two successful video games based on the board game, and MB and Games Workshop collaborated again on a science fiction iteration, Space Crusade (1990).

Unsurprisingly, the game's popularity (it sold hundreds of thousands of copies in its original run) has made it a prime target for restoration in the modern board games market. Gamezone Miniatures, a Spanish company with the licence to make the game in Spanish, tried to mount a reprint campaign in 2013 but fell afoul of legal concerns. A second attempt was made a few months later, but this was shot down by Moon Design Publications, publishers the HeroQuest pen-and-paper RPG. Chaosium took over the RPG and renamed it QuestWorlds at the start of 2020, which may have allowed others to stake a claim to the Hero Quest name (although this is unclear).

In July Restoration Games stepped in to trademark a project called Hero Quest: Legacies, although they noted at the time they did not plan to immediately develop a project.

Given that Hasbro have now set up a Twitter account and website, it appears that they have fully secured the Hero Quest name. They also have the design work IP from their prior acquisition of MB Games. They don't have the rights to use any of the Games Workshop-specific creatures or factions, so don't expect to see Fimirs or Chaos Warriors in the new game, but beyond that it looks like all systems go for a resurrection of a beloved, classic game. It'll be interesting to see what form it takes.

No Fimirs or Chaos Warriors, no matter, the best thing about Hero Quest is the Gargoyle.

YES--I'm so excited about this!

I just picked up the original not even a year ago. Still happy to see a return.

Sweeeeet!! I still have mine and its complete!

Look at the muscularity!

I think you will find the best thinkg about Hero Quest is the furniture. I myself, have replaced all my furniture with hero quest furniture.

"The best thing about Hero Quest is ignoring the roll to move rule."

Which in fact is a small bloodthirster.

The best thing about HeroQuest is the dwarf... no, the BROADSWORD

Gotta get that art right. The original art sets a very high bar.

The best thing about heroquest is the Broadsword!

It's all pure speculation.

... peasantry! The best-thing about Hero Quest is the Dwarf...

Finnaly there bringing it back. 😁. Though artical comments. 1st " a traditional fantasy world". Nope it was the world of warhammer fantasy. The game has the games workshop logo on the box. 2nd there was also a kickstarter around a number of years back that didn't make it. So 😥.
Ps sorry to be that guy. But I loved that game. I even remade the game with modern GW / FW models.

The best thing about HeroQuest is the broadsword.

The best thing about HeroQuest is the broadsword.

The best thing about Hero Quest is the barbarian.

Definitely on my to buy list! At long last!

The best thing about hero quest is that it's hero quest!!!

If you haven't tried Gloomhaven, do it. Awesome, though it will take a few scenarios to fully understand the many rules. For a more gentle introduction, start with the companion game Jaws of the Lion, which uses the same ruleset minus one or two features, and the first few scenarios slowly introduce the ruleset a few rules at at time.

Our current Gloomhaven campaign is on hiatus while my son is at college, but we can't wait to pick it back up when he comes home for the holidays.

The best thing about Hero Quest is the box art

Wrong! The best thing about Hero Quest is the broadsword!

@Dacvy---I think you meant, "The best thing about Hero Quest is the BROADSWORD!"

After the Spanish company went down with me cash, I sent an email to them asking them to recreate this game. I cannot believe it may c ok me true!

Why no Chaos warriors. Or call them Chaos knights. Chaos and the symbolism GW uses is based on the works of Michael Moorcock, and GW does not own that

"Hero Quest is the best game ever made and anyone who says otherwise is wrong."

I would say that Hasbro would at least keep the chaos warriors but under a different calling like dark or evil warriors. Also they should keep the gargoyle. I am also saying the same thing with the chaos socerer as either Dark or evil socerer if the base game in the past have them I am not sure. If they do, I would buy it and call them chaos because it is my choice. I wonder what will replace the Fimirs though. Will it be evil lizard like kolbolds or snake people?

Gloomhaven is not bad, but there are better ones out there. Check Sword & Sorcery for very good mechanics or Tainted Grail for a very good story. As I said, Gloomhaven is not really bad. It's a 7.9 out of 10 for me. It only stands out regarding the legacy aspect.

Was all hyped up and then saw no outside of north america... Total buzz kill.