The writer of The Watch, BBC America's increasingly controversial "loose adaptation" of Sir Terry Pratchett's Discworld novels, has apparently forgotten about the late author and his estate whilst extending his thanks to people involved in the making of the television series. In fact, the writer fails to mention the Discworld book series, or that his TV show is based on novels, at all. He instead names himself as the "creator" of the story in a remarkable display of hubris. 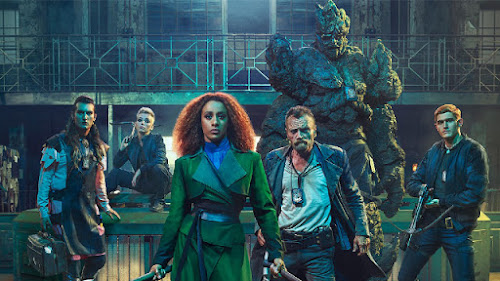 The apparent snub was picked up on by Sir Terry's daughter and literary executor Rhianna Pratchett on Twitter. Needless to say, the response from the enormous, global Discworld fandom has not been kind.

Sir Terry Pratchett wrote 41 Discworld novels between 1983 and his premature death from early-onset Alzheimer's in 2015. At the time of his death, the Discworld novels had sold almost 90 million copies, making it the joint best-selling post-Tolkien secondary world fantasy series (with near sales parity with Robert Jordan's The Wheel of Time and George R.R. Martin's A Song of Ice and Fire). The series is a cultural institution in the UK, where Pratchett was a perennial bestseller. Sir Terry was also lauded for his work for charities and bringing greater awareness of issues such as the endangerment of orangutan populations and Alzheimer's research. He was one of the few writers in the "national treasure" category. He also has a growing fanbase in the United States (who were late but increasingly enthusiastic attendees of the Pratchett party).

Six of the Discworld novels have been adapted for the screen: Wyrd Sisters and Soul Music were adapted to animation by Cosgrove Hall in 1997, whilst Sky adapted Hogfather, The Colour of Magic, The Light Fantastic and Going Postal between 2006 and 2010. Development of The Watch began in 2011, with the original idea being to develop a TV-focused sequel to the Discworld novels set in the city of Ankh-Morpork and revolving around the City Watch (starting with Guards! Guards!), rather than adapting the books directly. This version of the series was in development with the BBC for several years before the BBC divested it to BBC America around the time of Sir Terry's death.

BBC America hired a new writer (Simon Allen, best known for The Musketeers) threw out all the work that had been done already, apparently chose not to involve Sir Terry's family (including his daughter, Rhianna, a talented writer in her own right who had been closely involved in the prior project) and completely reconceptualised the project, including throwing out major characters, turning the setting into a "cyberpunk" city (nonsensically; I think they meant steampunk) and "sexing up" other characters by making them younger, thinner and better-looking. The Pratchett fanbase responded negatively to the early publicity images of the show and this discontent grew as it became clear that the Pratchett Estate was unhappy with how things had gone.

Snubbing the creator and writer of the original stories in this manner will likely increase the discontent and negative publicity the show has engendered so far.

The Watch is currently scheduled to air on BBC America in January 2021. A UK broadcaster has not yet been announced.

This has to be a joke, by god! The insolence of these people knows no bounds. Well, no matter, this show'll be DOA anyway (I hope).


Even Cut-Me-Own-Throat Dibbler wouldn't try and sell this kind of 'meat' programming.

Is The Watch going to have to be labeled as 'not containing any Discworld'?

"A miracle in a world of closed doors, minds, borders and hearts," Simon Allen writes on Instagram, and the ever greater levels of drama by the Pratchett Estate makes me think there's a double meaning to that sentence.

I bet if they actually had included Terry Pratchett in that list, the estate would simply have played the opposite tack: "How dare they use my father's name to promote a work that has nothing to do with" etc etc

And nobody have actually seen The Watch yet.

I’ve got to admit, I’ve been following the story for a while.

This travesty has nothing to do with any Terry Pratchett I read.