LEVIATHAN FALLS will be the final book of THE EXPANSE

Ty Franck and Daniel Abraham - the two halves of the gestalt author-entity known as James S.A. Corey - have confirmed that the ninth and final volume of The Expanse will hit bookshelves in 2021, ten years after the release of the first book in the series, Leviathan Wakes. Fittingly, the last book will be called Leviathan Falls. 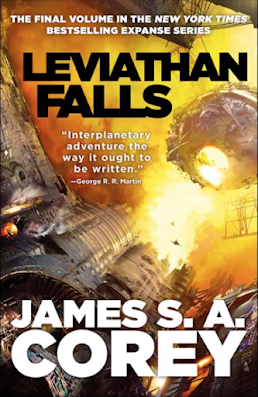 The other books in the series are Caliban's War (2012), Abaddon's Gate (2013), Cibola Burn (2014), Nemesis Games (2015), Babylon's Ashes (2016), Persepolis Rising (2017) and Tiamat's Wrath (2019). A series of short stories and novellas has also accompanied the main series. A further novella will be released alongside Leviathan Falls, with plans for a collection of all the novellas and short stories after the main series wraps. Their next project will be a trilogy, possibly a more distant-future, epic story in the vein of Dune.

In 2015 the books were adapted as a television series, The Expanse, initially on SyFy but now on Amazon Prime. The fifth season of the TV show, which wrapped production back in February, is expected to hit screens before the end of the year.