Hasbro has unveiled their fresh take on classic 1989 board game Hero Quest. 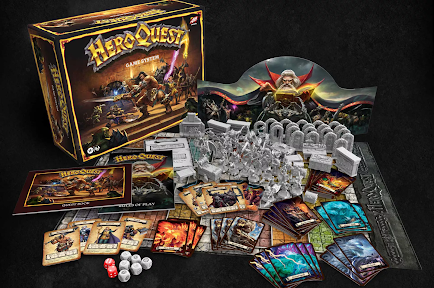 As related previously, Hero Quest was launched in 1989 as a collaboration between Milton Bradley Games (a subsidiary of Hasbro) and Games Workshop. The game saw a band of heroes braving a dungeon, depicted on a single board which would be adjusted with scenery into numerous different configurations. The game was a revelation at the time for its detailed miniatures and intricate scenery (particularly the impressive furniture). The game was a bestseller in both the USA and across Europe, although sales dropped off in 1992 and the game was cancelled after several expansions and a revised "advance" edition.

The new game is true to the original but has some updates to the gameplay to make it more streamlined and user-friendly. It has also removed any Games Workshop IP-derived creatures and characters to avoid potential legal issues, with "Chaos Magic" becoming "Dread Magic," Chaos Warriors becoming more generic "Dread Warriors" and Fimirs becoming a new race of aquatic monsters, the "Abominations".

The game has several improvements, such as using full plastic models for the doors (rather than card), plastic engraved dice and plastic bookshelves and fireplaces. The game will also allow players to play as either male or female versions of the four main characters.

The game is being crowdfunded via Hasbro's inhouse Hasbro Pulse Lab system. Players can preorder the base game for $99.99 or the "Mythic Tier" at $149.99, which includes additional miniatures based on the guy who gives the party its missions, Mentor, and the evil Witch Lord Zargon (who replaces Morcar, who is now a Chaos Lord in Warhammer). It will also include two full expansions based on the originals: Return of the Witch Lord and Kellar's Keep.

If the game exceeds its funding goal of $1 million, it will unlock additional bonuses like a new character class, the Warlock, and an entire new campaign book from original Hero Queste designer, Stephen Baker.

At this time of writing, the game had exceeded $200,000 in funding in less than 45 minutes, so it's quite likely the game will hit and then smash its goal.

Unfortunately, Hasbro Pulse does not ship directly to Europe, Asia or Australia, and only to Canada with hefty shipping fees. Given the absolutely titanic popularity of Hero Quest in many of those territories - and this is a British game in the first place! - that is disappointing.

Some fans have also expressed dismay at the price and the lack of any updated gameplay, noting that contemporary dungeon crawlers like Descent, Imperial Assault and, especially, Gloomhaven and Frosthaven have much more gameplay and many more ideas than Hero Quest at a cheaper price point.

More details should be released at Hasbro's virtual games event this weekend. They are currently targeting a late 2021 release date.

Even back in the 90s, it really paled before the old Warhammer Quest game (released in 1995). The main thing it had going for it was easier set up and more atmosphere from all the furniture that came with it.

They have resolved the shipping issue with Canada so the shipping should be more reasonable now. I do think if you ordered prior and actually kept the order with the high shipping cost (over $100 I think it was), then you will need to cancel and rebook your order. Three unlocks so far (Warlock, Combat Dice and Skeletons). Next up the Goblins and then the quest book. They hinted there may be more like another quest book at $4 million but that seems like a bit of a stretch currently.

Also wanted to note that in the North American version it has always been Zargon and not Morcar for whatever reason (evil twin brothers perhaps?)

The main draw to the game may be those who wanted a copy of the game but had to settle on bit and pieces they find here and there due to the game selling for so much on eBay and other sites. So if you think about it, $99.99 for the game with the extra "female" version of the heroes and a priceless Ragnar (why that character?) to boot doesn't seem to much a stretch. Then for $50 more you get two expansions with the included miniatures and a total of 20 more quest plus the Mentor and Witch Lord and any unlocks (so far 3) which really seems to be the way to go if you want to buy the game. Think about how much you'd spend on the original complete box, complete Keller's Keep and complete Return of the Witch Lord.

Having said all that, it does seem directed at those of us that own the prior game by keeping the same rules we are familiar with and the same story lines but adding just a little bit of an upgrade touch. I do wish it were offered world wide, not only for the unlocks but I'd love to see a BardicBroadcast "cracking" unboxing!