Back in 1989 Games Workshop joined forces with MB Games to produce Hero Quest, a miniatures boardgame which pitted four heroes against the forces of a diabolical wizard. The game drew on the Warhammer world and setting for inspiration, though foreknowledge of that game was not required. The game was immensely successful in Europe and a minor hit in the USA, spawning both an SF spin-off (Space Crusade, based on the Warhammer 40,000 setting) and numerous expansions to the base game. Now it's coming back. 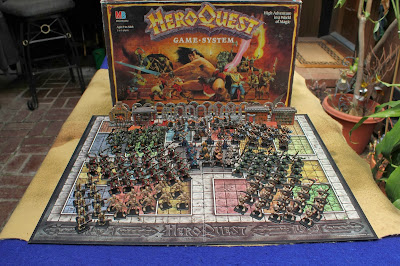 The original Hero Quest and its monsters, board and scenery.


Gamezone Miniatures have the licence to reproduce the original board game in Spain, as well as adding various new features to it (the 'scenery' markers in the original game were cardboard tokens, but in this release will be small 3D models). Gamezone are also talking to other IP holders (Hasbro own the Hero Quest IP in the UK) about rolling out a wider release. However, the game will be available (in English) from Spain for international orders.

The Kickstarter has already been an enormous success, raising over $320,000 of a mere asked-for $58,000 in just a day. It's expected that the appeal will comfortably raise more than $1 million before the Kickstarter closes in 30 days' time. 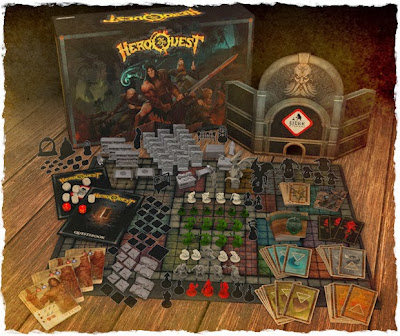 A rough mock-up of the new version.

Fantastic game and I still have the original.

No link to the Kickstarter campaign? I mean, I can find it myself, but...

I'd be kind of hesitant before throwing money at this. I mean, GW is one of the most litigious gaming companies out there. It may or may not have legal standing, but there's enough grey area to make investing in this kickstarter extremely risky.

i have the original too but they just rerealesed the exact heroquest that they did 30 years ago so like i think this might be click bait but not too sure.

This article is 7 years old dude.

The fate of this project is an epic story in itself, but one probably for another time.

I'd like to hear it if you know? was always fond of Hero and then space crusade was the gateway game for me. Obviously i see the kickstarter campaign was pulled.. but what happened with the law suit and IP? they should add a character, enemy or item or an additional mission pack.

Hasbro took control of the IP and is currently running their own, fully legal crowdfunding on the HasLab website.

I invested hundreds of dollars in this venture. What did they do with monies?

Do investors still have a stake in venture? I invested $500.

You'd have to contact the original company doing the crowdfunding. The project collapsed and the rights were regained by Hasbro several years later.