Valve's seminal masterpiece, Half-Life, celebrates its 15th birthday today. The original game was released on 19 November 1998 and completely changed the face of gaming, especially in the first-person shooter genre. 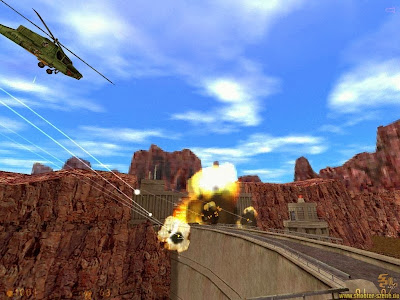 Fighting a helicopter is ten-a-penny in modern shooters. But in 1998 this was totally jaw-dropping.

Half-Life was notable for its total immersion: the main character, Gordon Freeman, never spoke and there were no cut scenes to take you away from the action. Instead the game involved you in its world and action at every turn. Exposition and plot development was fairly restrained, with you picking up clues on what was going on in the world from overheard conversations and notes pinned to walls. The combat was sublime, especially at the time, and the game was noted for its strong art style, sense of place and exceptional AI. Some criticisms were levelled at its linearity, overly-frequent load points and the dull closing levels on the planet Xen, but overall the game is well deserving of its masterpiece status. Two expansions from Gearbox followed, Opposing Force (1999, excellent) and Blue Shift (2000, meh). Last year a superb modern remake of the pre-Xen levels, Black Mesa, was released and was totally worthy of the Half-Life name.

After a long delay, the game was followed by a sequel, Half-Life 2, released in late 2004 to almost as much acclaim. Two of three planned expansions followed, Episode One (2006) and Episode Two (2007), as well as two games set in the same universe but focusing on different elements, Portal (2007) and Portal 2 (2011). Valve went on to also create Steam, the PC's biggest digital gaming store (with over 65 million active accounts) which has been credited with helping save PC gaming from falling into obscurity and restoring it to the front line of gaming popularity.

It has been informally confirmed (via many, many leaks from Valve) that Valve are now working on Half-Life 3, which replaces and supersedes the missing Episode Three, but it is unknown when we will get to see it.

So happy birthday to Half-Life and congratulations to Valve, who have gone from a bunch of ex-Microsoft developers and Quake map-makers into one of the biggest and most important companies in gaming. And it all began with a certain tram ride a decade and a half ago.
Posted by Adam Whitehead at 21:37

15 years? Good grief. I remember early on, the soldiers appeared to give each other cover as they advanced on your position. Revolutionary for the time.

and this game is still better than Call of Duty