Sarah Manning, a petty fraudster, has returned to the city she grew up in to put her life back together and reunite with her seven-year-old daughter, in the keeping of Sarah's foster mother. However, Sarah's life is thrown into turmoil when, getting off the train, she immediate comes face-to-face with a woman who is her exact double. The double immediately throws herself in front of a train. Shocked, Sarah steals her belongings and discovers she has a lot of money in savings. Sarah decides to pose her double to take that money and built a new life for her and her daughter...but when she discovers that there are yet other duplicates of her out there, things become a lot more complicated. 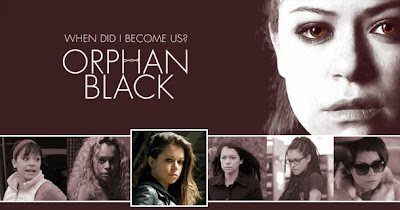 There are many reasons to watch Orphan Black: its compelling science fiction plot and ramifications (handled with a light touch), the perfectly-timed story development and pacing, the interesting array of three-dimensional supporting characters, its excellent soundtrack and its refusal to conform to any kind of formula are among them. But one stands tall over all others: the absolutely astonishing central performances by Canadian actress Tatiana Maslany. Maslany plays not just the central character of Sarah, but an array of her various doubles and duplicates. In one episode she plays no less than five characters, many of them interacting with each other. The interactions themselves are convincing (with judicious use of CGI and overlaying of images, but mostly clever double work and positioning) but it's Maslany's ability to fully inhabit and develop each character as a completely separate individual that is jaw-dropping. Even when they are posing as one another, it's possible to tell which is which through subtle nuances of expression. Before the season is half over, it's easy to join in the chorus of voices expressing disapproval that Maslany was robbed of an Emmy nomination this year. The only flaw in her performance is her 'street' English accent she uses as Sarah, which is mostly acceptable but occasionally dips towards Dick van Dyke territory. But it's easy to forgive given how good she is on every other level.

The supporting cast is a mixture of other young talent and established names. Providing experience and presence are Matt 'Max Headroom' Frewer and Maria Doyle Kennedy (probably best known internationally as Queen Catherine of Aragon on The Tudors, also known as 'the best thing in it') as the morally ambiguous Dr. Leekie and as Sarah's foster-mother Siobhan respectively. Amongst the other younger castmembers are Jordan Gavaris as Sarah's foster-brother and partner-in-crime Felix (whose English accent is better, though still a bit affected) and Michael Mando (who played the psychotic Vaas in the recent computer game Far Cry 3) as Vic, Sarah's highly unreliable ex-boyfriend who plays both an antagonistic and comic role as the series progresses. The cast is, as a whole, fairly likable and play their parts well, though the otherwise-solid Kevin Hanchard could do with bringing a bit more subtlety to his role as Detective Art Bell. 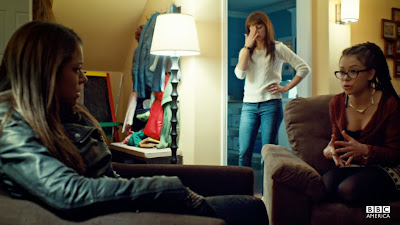 The series has a relentless pace to it which makes a nice change from other shows that seem to delight in rationing out their secrets to the audience over many years. Instead, Orphan Black covers more ground in its first episode than most shows manage in two seasons. By the end of these opening ten episodes alliances have been forged and shattered, major characters have arrived and been killed off and the secrets behind the duplicates have been exposed, explored, developed and complicated several times over. Yet the show never feels rushed, with a good blend of drama, psychological horror and occasionally hilarious comedy (particularly driven by Sarah's 'soccer mom' double, Alison) making each episode immensely watchable and indeed re-watchable in the light of information unveiled in later episodes. The show is also sensible in dropping even major characters for several episodes in a row when they have nothing to do rather than giving them pointless filler storylines. Not only is the cast good, but their interactions are highly engaging: Felix and Alison's initially prickly relationship develops into a more amusing friendship as the season continues, whilst Sarah finds it tricky to deceive Art, a good man who may end up on the opposing side to her.

Picking out flaws is almost impossible, and the most noticeable (such as Sarah's accent) are pretty trivial. One of the revelations in the season finale is a bit puzzling, since it is completely illegal and would never stand up in a court of law yet the characters react like it's a life-changing moment. There's also an argument that the actual cliffhanger is leaning towards the predictable cop-out side of things and, on occasion (most notably in the final two episodes, which barely pause for breath), the show's pace runs away with it a little and allows it to get away with a few minor lapses in plot logic.

But it's hard to criticise the show too much. Orphan Black's first season (****¾) is relentlessly entertaining, supremely-acted by its star and its science fiction plot is surprisingly well-developed (the science itself is a bit simplified for casual viewers, but the social ramifications are addressed nicely). It is available now on DVD and Blu-Ray in the USA, but, somewhat perplexingly, not until August 2014 in the UK (DVD, Blu-Ray).
Posted by Adam Whitehead at 18:29

Wert, dude, this such great timing on your part.

Was introduced to this show a week or more ago; then I rewatched the season with my sister.

It's an excellent piece of televsiion. My god, I can't get over Maslany's performance—really, though, why no awards?!—and the story overall.

Gah. I don't want to gush. Happens to much when I talk about this show.

All I'll say is I cannot wait for the next season. (So good!)

Maslany is also very good in the Ginger Snaps sequel.

None of the aussies I've asked have thought anything bad about Sarah's accent. There are SHIT loads of british accents and hers was fine. It may not sound "nice" but it there was nothing wrong with it.
It is usually American's who have relatively less exposure to various British accents that are complaining.

Thanks for the review. It reminded me about this show, which sort of flew under the radar last summer on BBC America. I watched the first episode last night and found it quite intense and intriguing.

The only thing that bugs me is that it does not specify where the story takes place. There is a mention of 'a next train to New York' in the first few minutes, but the show does not make much an effort to try to look like it takes place in America (there is a lot of shots of colored money). Do they announce New York City bound trains in Toronto train stations?

I wonder if the makers of show fear that Americans or British audiences won't watch the show if it the story is set in a Canadian city?

I like shows with a strong sense of place (The Wire, Friday Night Lights, Girls, etc) -and this show would be improved if it just embraced Toronto as the setting.

It is set in Toronto. The cars have Toronto plates, the buildings are those of Toronto and, most notably, Alison's suburb is a real Toronto suburb. The characters also deal in Canadian money. So whilst they don't make a big deal of the city, it is pretty clearly supposed to be Toronto for those who care.

I think I need to binge watch the DVDs, when I have plenty of free time to do it.

A couple of items. First is Sarah Mannings accent, remember she was raised by an Irish accented foster mom. Sarah moved away from England when she was around 12 years old. She then lived in America/Canada for more than half her life. Anyone expecting Sarah to speak with a perfect Brit accent is being a bit parochial. But on the other hand had Sarah spoke with one that would have been a huge mistake. This issue only exists for those who don't know Sarah's story or for those who choose to make up their own drama so they can complain about non Brit actors in Brit roles.
Second issue is location, the creators said they left it vague on purpose, they called it "Genarica." They wanted it to be anywhere.

"she was raised by an Irish accented foster mom. Sarah moved away from England when she was around 12 years old. She then lived in America/Canada for more than half her life."

But so did Felix, and he was younger than Sarah. Yet his British accent is pretty good and has remained quite strong.

"Second issue is location, the creators said they left it vague on purpose, they called it "Genarica." They wanted it to be anywhere."

Indeed, which is why they don't say Toronto in dialogue. But it is Toronto, as the supporting evidence overwhelmingly points to.