The Director's Cut of Deus Ex: Human Revolution is a re-release of the SF RPG with added and revised features. I reprint in full my original review from 2011, followed by analysis of the differences between this new edition of the game and the original. 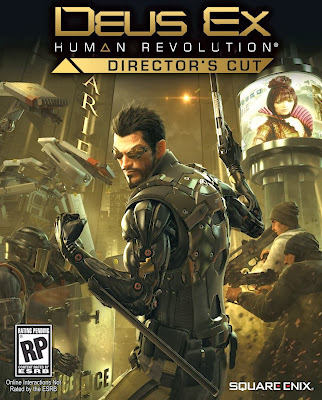 Detroit, 2027. The human race is changing, with nanotech research and cybernetics technology making 'augmented' humans stronger, faster and smarter than their 'normal' forebears. Numerous groups are opposed to augmentation on ethical and religious grounds. Adam Jensen, chief of security at Sarif Industries, one of the leaders in augmentation research, is severely wounded when terrorists attack and destroy one of Sarif's labs. Saved by augmentation, Adam must investigate the attack, discover the motives of those seeking to destroy Sarif Industries and, ultimately, decided which side of the argument is the 'right' one.

Human Revolution is the third game in the Deus Ex franchise, serving as a prequel to the events of the original Deus Ex and its lacklustre sequel, Invisible War. Set twenty-five years before the first game, Human Revolution helps show how that world of nanotech and enhanced humans came into existence. As a prequel, Human Revolution requires no existing knowledge of the earlier games and makes an ideal jumping-on point for new players.

Contrary to screenshots which suggest that it's a FPS, Human Revolution is a science fiction roleplaying game played from a first-person perspective. The game is built around the idea that though there is a central narrative the player must follow (this isn't an open-world SF RPG like Fallout 3), the player has tremendous freedom in how he or she follows that narrative. The game has a robust combat system which will satisfy those who like shooting things, but it also has a solid stealth mechanic for those who prefer sneaking around in the shadows (or, more often, inexplicably large air ducts). The game also has a hacking system so players can also hack into computer networks and turn automatic defences against enemy forces. Even within a particular play style, there is flexibility, with the ability to stun or knock out opponents rather than killing them being a particularly welcome feature (and the game has achievements for those who complete the game without killing anyone). Most players will probably mix and match styles as the mood takes them, or depending on the mission.

Deus Ex was infamous for its tremendous flexibility and freedom, adapting its storyline to cater for the player deciding to kill off major NPCs on a whim and letting them simply escape from tough bosses rather than being forced into difficult battles (especially if they were not built for combat). Human Revolution isn't quite as liberal in its approach to gameplay, most notably due to the four tough and unavoidable boss fights which have been commonly and frequently criticised. In a game which enjoys giving you different options in almost every circumstance, being forced into situations where you have to break out the heavy artillery is annoying, especially if you've been upgrading your character for say stealth or hacking and are not optimised for combat.

However, this is the only major criticism I can level at the game. In almost every other arena, Deus Ex: Human Revolution is a triumph. The game has a fantastic atmosphere and sense of place, backed up by an absolutely superb soundtrack and carried through some top-notch writing. Deus Ex is one of the most critically-acclaimed games of all time, and there were doubts that Human Revolution could live up to that precedent. These doubts have been laid to rest. The game is more than worthy of its illustrious heritage, and deserves plaudits for its clever design. It employs regenerating health and a cover system, two features of modern FPS games which are often groan-inducing and tiresome (is there a company somewhere that specialises in building chest-high walls and inexplicably littering them over levels?), but Human Revolution takes ownership of them. The regenerating health is justified as a force-shield, whilst the cover system (well-implemented as these things go) does double time as a tactical combat mechanic, allowing your character to move around whilst suppressed, rolling from cover to cover, firing blindly and finding sniper vantage points. Actually, the cover system pulls triple duty as a stealth mechanic in non-combat situations as well. 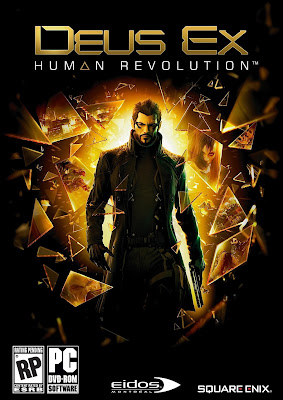 The game has a lot to say about the rights and wrongs of cybernetics, augmentation and the power of corporations and governments, but tries not to get preachy. As the game progresses, your character can develop his own opinion on matters, informed by the events he's experienced and the choices he's made, and the multiple endings (there are four radically different resolutions, each with three different endings based on your character's actions earlier in the game, meaning a total of twelve possible outcomes) can see him reaching very different conclusions. Whilst you can't create your own character, you can certainly develop him in more depth than in most CRPGs. This is helped by an excellent 'dramatic conversation' mechanic where you must argue with a major NPC over an important topic, trying to convince them to help you or surrender without the need for violence. Major plot revelations crop up in these conversations. However, it's odd that there aren't more of these (there's only three or four in the game), as in their own way they are more critical to the game than the tedious boss fights.

The game's central storyline is gripping, tightly-written and populated with memorable, well-acted and flawed characters. However, the game has two large hub areas (in Detroit and Heng Sha) where you can wander off from the main story for a while and pursue some side-quests. A couple of these side-quests are extensive, taking a couple of hours apiece to complete, and are a great opportunity to gain additional XP and increase your character's skills and augments. These hub areas are rich in incidental detail and flavour (overhearing citizens discussing the news stories of the day, being offered food from stall-owners etc), but arguably there's little to do in them outside of the (relatively few, for the size of these areas) quests and buying some equipment and weapons from a few vendors. A bit more going on in each zone would have expanded the play-time (which at 25 hours is reasonable but not particularly notable for an RPG) and made the game a little richer. Also, the game rarely strays far from the traditional FPS paradigm of having most of its actions set indoors in successions of corridors and offices. A little more variety in locations (perhaps more outdoor opportunities for stealth or combat) would have been nice.

These kind of complaints are very minor. In a world of increasingly bland and 'safe' first-person shooters, Deus Ex: Human Revolution (****½) stands out with its strong writing, well-defined characterisation and its refreshingly open approach to freedom and choice, whilst having compelling action sequences as well. It's one of the strongest RPGs, and indeed games overall, of the last couple of years and is well worth a look.

The Director's Cut
The Director's Cut is a re-release of the original Deus Ex: Human Revolution with a number of new features. The most notable is a set of Wii U-exclusive features which make excellent use of that console's touch-screen controller, allowing players to hack computers and refer to their map, quest log or inventory without switching out of the main view. I haven't seen these features in operation, but other reviews indicate they are well-implemented.

Of more interest to PC and other console players are the upgrades to the actual gameplay. The most notable of these is that The Missing Link DLC - which takes place about two-thirds through the original game - has been integrated into the main narrative. There are good and bad points to this. First, if you haven't played The Missing Link before it adds about 4-5 hours of gameplay set on a remote base in the middle of the ocean. It adds new environments and enemy types and, like the main game, a series of situations to resolve through combat, hacking, stealth or a combination of all three. There's also some tough moral choices. The DLC integrates into the main storyline quite well, with Jensen's continuing investigation into the attack on Sarif Industries informing the expansion. Unfortunately, the expansion's biggest weakness remains: it removes all of your augments and upgrades, forcing you back into the state you were at the start of the game. This makes the first half of the DLC a chore as you rebuild your skill set back up to something useful. The Director's Cut really should have eliminated this tiresome mechanic (originally necessary because it was played separately from the main game) and allowed you to continue with your existing inventory and skill set. Still, once it kicks into gear it's a very worthy expansion to the game. 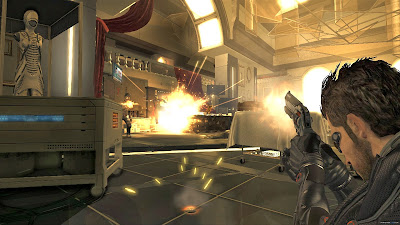 The second notable change is to the boss battles. Much-criticised in the original game, The Director's Cut reworks them so each boss can now also be defeated by stealth or hacking as well as direct combat. Unfortunately, defeating the third boss, Jaron Namir, requires hacking skills. Depending on a choice made earlier in the game, your augments may be completely offline during this battle, making hacking impossible and forcing you to defeat him in direct combat. Fortunately, as this battle comes shortly after The Missing Link, in which you can acquire a powerful missile launcher which can take Namir down in just a couple of hits, the developers have a way around it.

Eidos Montreal also claim to have upgraded the game's graphics. To be frank, this claim seems dubious. The textures seem identical, the lighting and shadows appear to be the same and the character models are still the mixed bag they were in 2011. The console versions may indeed look better, but the PC version is identical.

Finally, the game adds a 'Game+' mode in which your augments and weapons loadout continue into a new game. This is a nice touch if you plan to replay at the hardest difficulty level (which is notably more punishing), but given you can max out 90% of your augments in a single playthrough, it will leave you as an almost unbeatable tank during the replay.

Deus Ex: Human Revolution - The Director's Cut improves on the original game, but it's more of a series of minor upgrades than a major transformation of the whole game. If you've already completed the game (iffy boss fights and all) and The Missing Link, it's questionable if there is enough here to make it worthwhile, especially on console where you have to re-buy the entire game. Wii U users will likely enjoy it tremendously as a rare and much-needed example of what their console can do. PC players, however, will find that the Director's Cut is an extremely cheap upgrade on Steam if they already own the original game and The Missing Link, in which case it's a no-brainer.

For new players who have never experienced the game before, the improvements remove the original game's most annoying niggles and leave it as a cyberpunk RPG masterpiece it aspired to be. If you haven't played the game before, the Director's Cut (*****) is a must-buy. It is available now in the UK (PC, X-Box 360, PlayStation 3, Wii U) and USA (PC, X-Box 360, PlayStation 3, Wii U), or from the Steam platform on PC.
Posted by Adam Whitehead at 11:15

I was worried about deus ex universe being a MMO and if this was going to be true at least i have DE:HR with good boss battles to entertain myself.