Under the Dome: Season 1

The town of Chester's Mill is sealed off from the rest of the world by an invisible dome. The inhabitants - and various visitors - have to manage dwindling supplies and social disorder whilst trying to figure out how to escape. 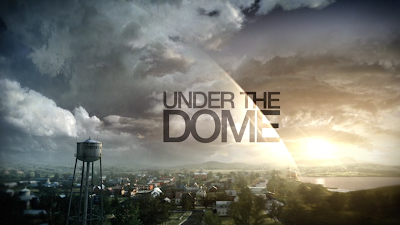 We live in a golden age of television, with TV shows pushing further in crafting excellent narratives and creating compelling characters out of even the most mundane of situations. Rising budgets and production values mean that TV shows now often look like movies, sometimes with big movie stars opting for the less-lucrative but more creatively and artistically rewarding opportunities to slowly explore and develop characters over hours and maybe years. It's a great time to be a TV fan.

Under the Dome therefore stands as a stark warning that we should not be complacent or overconfident that this is a state that will last forever. Under the Dome is a horrible show, so terrible that on a fundamental level all involved with it must know how bad it is, and therefore can only have made it deliberately as a warning to others to stay on the ball and avoid this show's pitfalls.

Under the Dome is based on Stephen King's quite excruciatingly awful novel of the same name, but in a move that is actually impressive, is awful for completely different reasons. The primary weaknesses of King's novel - the ludicrous implausibility at how quickly everything disintegrates and its unhealthy obsession with raping Twilight fans (seriously Stephen, we know you're a Harry Potter fan but that's just juvenile) - are fortunately missing from the TV show. Brian K. Vaughan - the man credited with saving Lost from a dip in form during its early third season - has great credentials and is a good enough writer to know what to change from the book (i.e. almost everything apart from the dome itself and a few character names) to make it work on TV. But pretty much none of it does work.

The biggest problem is the total lack of decent, compelling characters. Our main lead appears to be Dale 'Barbie' Barbara, but he is a rather unsympathetic killer and thug. Actor Mike Vogel initially gives it his all, but after a couple of episodes seems to realise that the inexplicable lurches in his character's motivations aren't going away and decides to sleep-walk through the rest of the series. Rachelle Lefevre also gamely engages with her character of Julia before realising she doesn't have a character, just a cliche (unconventional journalist from out of town with totally amazing hair), and likewise phones it in. The young kids are more enthusiastic and get some credit for being the only people in town actually bothered about what the dome is and where it came from, but their lack of experience and some poor direction results in them lurching from painfully over-acting to massively underselling big moments.

There are some good points in the cast. Natalie Martinez's character of Linda has some bizarre character turns and is rather gullible at times, but she at least just about manages to sell the idea of a character cracking up from the stress of the situation (whether that was the aim or not). Dean Norris also brings some much-needed charisma to the antagonistic role of 'Big Jim' Rennie, even if some of his quite astonishing lines are delivered through teeth hugely gritted as he tries to forget he went from filming Breaking Bad to this mess (a drop in quality only comparable to Natalie Portman appearing in Black Swan and then Your Highness). However, the good work of others is undone by Alexander Koch as Junior. His utter lack of acting talent and the way he seems to have only three stand-by expressions he moves between, sometimes randomly, is almost hypnotic. It's certainly the worst performance by a regular in a TV series that I've seen in many, many years.

The writing is also awful. Brian K. Vaughan has some seriously good work to his name, but he seems unable to employ it here. Dialogue is expositionary, unconvincing and wooden in the extreme. You can predict how entire scenes will go - sometimes down to lines - from their opening moments. The show also starts back-pedalling from its premise - a bunch of people trapped together in a dome - immediately by periodically bringing in new characters and unconvincingly explaining they've been in hiding since the dome came down. When the writing doesn't even have the courage to deal with the basic premise of the show, there's a huge problem.

Under the Dome's first season (*½) is almost irredeemably bad. The writing is almost completely bad, the acting is mostly bad, very little about it (from character motivations to the supply situation to the utter lack of contact with the outside world after the third or fourth episode) makes any kind of sense and the whole thing feels like a big, dead, inert weight. A few flashes of competence from a couple of the actors are the only thing that makes watching it even remotely bearable. Still, it's a vast improvement on the novel.
Posted by Adam Whitehead at 09:27

I read the book and watched about half of the show. Both were disappointing but I thought the book had its ups and downs, whereas the show basically had Junior. If that was bad acting than it was 'so bad it's good' acting to me. Kinda like a very young Keanu Reeves.

Well, I have to disagree with you on the novel, but I'm 100% with you on the series. Casting, acting, writing, direction - it was awful all around. I think their fatal flaw was in making the series all about the dome, rather than the people trapped inside, but that's just where the problems began.

I noticed that they just 'forgot' about the outside world too, but when Maxine just wandered in after conveniently hiding for the entire season . . . well, that was the final straw.

Excellet review, except that last sentence. Not that the novel was any good, but it was certaintly much better than the show, as the actors in a reader's mind, at least, can act.

I stuck with it because I liked that it was going to be a one-season-and-done series and I was interested in how they were going to change the ending. Then, with one or two episodes left they announced that it would be returning for a second season and I knew they wouldn't be resolving anything. Won't be back for next season.

So, he's like Will Smith's son acting kinda of bad? :P

Something must be wrong with me, as I actually liked what I've seen so far. Granted, only just over half have aired in Sweden so maybe it'll still crash and burn horribly.