The Republic of Thieves by Scott Lynch

Locke Lamora is dying, poisoned by an enemy during his previous con. However, he receives an offer from the least likely source imaginable: the Bondsmagi of Karthain, his sworn enemies. In return for saving his life, they want him and his stalwart companion Jean to help their allies win an election in their home city. The only problem is that the rival faction has the same idea, and has hired the one person in the world who can match Locke in a battle of wits: his former lover, Sabetha. 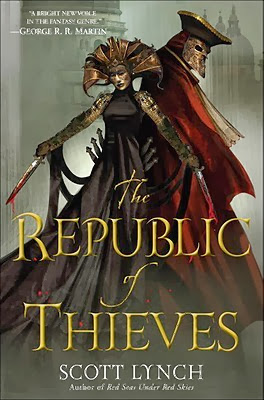 The Republic of Thieves has finally arrived, six and a half years after the publication of the previous book in the series, Red Seas Under Red Skies. The medical and personal problems which have afflicted Scott Lynch's writing have been well-documented elsewhere and seem to be resolved, with the next book in the series, The Thorn of Emberlain, reportedly already nearing completion and hoped for publication in late 2014. Hopefully this is the case, because The Republic of Thieves marks the end of the 'stand-alone adventure' phase of the series and the arrival of what appears to be a somewhat more serialised mode of storytelling.

Like its two predecessors, Republic is divided into two storylines. We have a present-day storyline set in Karthain and featuring Locke and Jean trying to win an election in which they are opposed by someone who knows them better than they know themselves. We also have a lengthy flashback to when the gang were teenagers and sent to work in the city of Espara, where they find themselves trying to stage a play (the Republic of Thieves of the title) despite their director being in prison. The book alternates between the two storylines as it progresses.

Both storylines are entertaining, though the flashback one is arguably the stronger of the two. The secondary characters in the theatre company and city of Espara are more strongly-defined and the escalating catastrophes of things going wrong and then getting worse is quite compelling (overcoming the weakness that we know the 'regular cast' survives because, hey, flashbacks). The current-day storyline, set in Karthain, is hampered by the fact that no-one (not the Bondsmagi, Locke or Sabetha) seems to really care who wins the election. There's some interesting (if more broadly-defined) characters featured in this section and the various vote-winning ploys are amusing, but the lack of stakes makes this storyline flag a little. The alternating structure is also not entirely successful: the chapters are quite long and involved, so you're just being absorbed into one storyline when the other resumes, and then the same problem recurs. Reading the flashback chapters as one self-contained novel and then the present-day storyline as one chunk does improve this issue and restores some pace to both narratives, which otherwise tend to bog-down mid-book. There is a large focus on the Locke/Sabetha relationship in both timelines, which tends to get a little repetitive and isn't helped by the 16-year-old Locke and Sabetha discussing relationship issues with impressive and not entirely convincing maturity, which in thankfully isolated moments threaten to the turn the novel into a fantasy version of Dawson's Creek, though Lynch manages to avoid it becoming too annoying. These discussions also later provide important groundwork for the development of their relationship in the present day storyline.

On the plus side, Lynch delves into Locke's psyche a lot more than in previous books and we get closer to finding out what makes him tick. He also lifts the veil on the Bondsmagi, and we learn more about their history, culture, beliefs and organisation. The story about how the Bondsmagi will save Locke in return for helping them out in a minor issue seems rather thin, and it's rather a relief to find that there is more going on than meets the eye. In particular, the closing chapters of the book (and the twist ending) do explain a series of oddities in three volumes to date. There are some complaints that, as a heavily-trailed character, Sabetha is disappointing but if anything this appears to be deliberate. Whilst intelligent and highly capable, Sabetha isn't the paragon Locke lionises her as, and discovering there is a plot reason why Locke is so unhealthily fixated on her is a relief. In fact, there is an argument for readers to read the last few chapters to discover the spoiler and then read the novel knowing about it, as it makes a whole bunch of decisions earlier on more comprehensible than if read cold. Fans of Jean will appreciate that he gets some very good development in the flashback chapters, but will be less impressed that he seems to be sidelined in the present-day story.

Both the twist and another subplot in the book (reports coming in of a brewing civil war in the Kingdom of the Seven Marrows) seem to mark an end to the stand-alone nature of each novel. It looks like that, from now on, the plot of each book will lead into the next (as Republic's apparently does into The Thorn of Emberlain). Those who were expecting and even hoping for this series to consist of isolated, repeated heists and capers may be disappointed by this, whilst those who have dismissed the series for being a bit lightweight for the same reason may be moved to a reappraisal. Whilst some may mourn the loss of the 'Fantasy Ocean's 11' approach to the series, I think it's interesting and healthy for an author to evolve his story and characters from book to book and not be trapped into doing the exact same thing for ten books running, and The Republic of Thieves certainly does that.

With The Republic of Thieves (****) Lynch has delivered a book packed with his trademark sharp dialogue, wit and cunning plotting, and with big improvements in worldbuilding and the portrayal of characters' emotions. It's a transformative book in the series, raising the stakes and making it more clear what the series (and the potential sequel-series Lynch has mooted) will actually be about. There are pacing issues and reading the two narratives as separate novels rather than one big intertwined one may be a better idea, whilst the stakes of the story are somewhat murky and only revealed at the end. However, this is  a step-up in quality from Red Seas Under Red Skies, even if it doesn't match the enjoyability of The Lies of Locke Lamora. The novel is available now in the UK and USA.
Posted by Adam Whitehead at 09:57

Email ThisBlogThis!Share to TwitterShare to FacebookShare to Pinterest
Labels: scott lynch, the gentleman bastard, the republic of thieves

I liked Red Seas Under Red Skies best as it showed some of the genius plotting that was missing in The Lies. He was really a Gentleman Bastard in this book.

The Bondsmagi are unfortunately very boring. They don't make for proper villains, especially a particular one, but I want to avoid spoilers.

There is a particular twist regarding Locke that ruins the whole series for me.

So it isn't about a Gentleman Thief anymore, but about... what?

Sabetha and the love affair had some appeal initially that soon turned annoying.

I would rate the book 3/5 with the nagging doubt that this series is going in a direction I don't like much.

Well, you've lost all credibility as an unbiased critic. 4 stars, huh? Republic of Thieves is one of the worst books I've read in years and your giving it praise makes me wonder if you actually read the book or just took some money.

I don't think you can criticise someone's credibility when you're too terrified to leave your own name.

For the record, I not only did not receive any money for the review, I didn't even get a review copy (unlike every other blogger out there, it feels) and had to go out and spend my own money on it. I enjoyed the book and felt the money well-spent.

I freaking loved the first two books, but as Longasc stated, I'm not sure I like the direction this book took right at the end.
The Republic of Theives was enjoyable, and I liked the sabetha/locke stuff, but the ending..... My god. I was just so meh about it.
My friend has told me about various scenarios and theories that have been discussed on westeros forums and stuff, but still...
Overall, the ending just wasn't to my liking, and I'm a little sad about that.

@Anonymous (the first one):
Is it, fun living in that little delusion, where your opinion is fact and anyone who disagrees are paid liars?

I loved the book, but I'm not sure I like the direction. I'll avoid a spoiler here, but I think saying that the stuff about Locke's true name has a chance to completely change the nature of the series and not in a good way. But given that the talent Lynch has shown for the first three books, it also has a chance to be an interesting bit of misdirection.

It was really interesting, after seeing how painstakingly he wrote AROUND Sabetha for the entire first two books, to have her wielded like a jackhammer in this one. It was also somewhat surprising to see the story shift from "great unrequited love story" to "Locke unhealthily fixated on the girl who happened to be his first love because she's the only girl he knew as a teenager." I think the shift was intentional, but I'm not 100% sure of that. There are times where I think we're supposed to buy her as Locke's match as a criminal genius, but her maneuvers don't quite match his for cleverness.

I'm the anonymous from earlier. My name is Doug Witt and I live in Michigan. What the hell difference does it make? I'm not terrified of shit, I just don't see the point in starting an account to comment. Now, knowing my name, am I still some anonymous person? Yes. So now can I criticize your shitty review - no difference, huh? And the reason you didn't get a review copy is because you are obviously a shit critic.

"Now, knowing my name, am I still some anonymous person?"

Yes. And you're still a moron with poor taste in books. Good day :)