Geralt of Rivia is a witcher, a warrior who hunts down and kills monsters using specialised training and unparallelled knowledge of alchemy. Having lost his memory, Geralt finds his way back to the witcher stronghold of Kaer Morhen, which soon comes under attack from a cult of mages, rogues and assassins known as Salamandra. The witchers' investigation into this cult leads Geralt to the kingdom of Temeria, where tensions seethe between the human and non-human inhabitants. Geralt must brave the perils of court intrigue, assassinations in back alleys and diplomacy with the fanatically hostile elves to track down and destroy Salamandra, and find the clues to his own lost past. 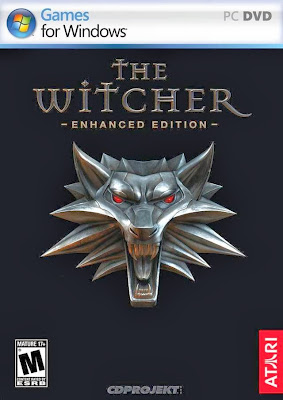 The Witcher was originally released in 2007 in a state that can charitably be called 'imperfect', with loading times that could be measured in interglacial epochs and some iffy graphics and voice acting. A year later, the game was re-released as an 'Enhanced Edition' with much better animations, re-recorded voice acting and faster load times that made it possible to finish the game before the heat death of the universe. CD Projekt's commitment to their game and making it as good as possible for their customers is, and remains, highly laudable.

The game itself is by turns frustrating, inspiring, compelling and ragequit-inducing. I started playing it in 2007 but was stymied by the load times. I restarted it in 2009 with the Enhanced Edition and got about halfway through before being frustrated into abandoning the game. Finally, I recently resumed the same save and managed to finish the game off once and for all. This tells you two things: that the game is so annoying that giving up is a viable option, but that it's also good enough to drag players back after years to finally complete it.

The game's structure is traditional: there's an opening action sequence which doubles as a tutorial, where an amnesiac Geralt is re-trained in the ways of witcherdom whilst fending off enemies. There's then a sequence of large, semi-open areas where you can follow the main storyline or pursue many (and I mean many) side-quests to help build up Geralt's funds and experience (which improves his skills). Unlike some mainstream RPGs, The Witcher sometimes prevents the next part of the main quest from triggering until you've completed some more side-missions, for both story purposes (characters and events from apparently unrelated side-quests have a tendency to become hugely important in the main storyline hours later) and mechanical ones: this game is tough and unforgiving, and Geralt needs every scrap of experience he can get to get through the game. Another major twist to the structure is that consequences do not immediately follow decisions: in some cases a dozen hours may pass before the outcome of a previous decision becomes clear, by which time you've committed to it. This prevents the, 'make decision, see village immediately explode, reload to make alternate choice' approach which works in other games.

Geralt spends a lot of his time talking to people and in combat (and sometimes talking to people whilst in combat). The talking part is okay, although the game assumes a greater familiarity with the source material (Andrzej Sapkowski's Witcher books and short stories) than most players in the UK and USA will have. Sapkowski is a European superstar who has sold millions of books from Spain to Russia, but in English he remains relatively obscure. Fortunately, the amnesia storyline means that most characters will reintroduce themselves (if rather briefly) on the first meeting and the rest of their development takes place as the game unfolds, which is more naturalistic and convincing than most RPGs where characters will introduce themselves with massive infodumps about themselves and the world. The characterisation is surprisingly nuanced and, though most characters have huge flaws, they usually have laudable aspects as well. When Geralt is presented with the choice of siding with the human-supremacist Order of the Flaming Rose or the elf/dwarf rebels, the choice is complicated by the primary Order character being a reasonable, honourable guy who might be able to moderate the Order's extremism and by the rebels, though having a just cause, being indiscriminate terrorists who kill civilians and soldiers alike. Whichever side you choose, or if you choose to stand aside, there will be both good and bad (but mostly bad) consequences regardless.

Combat is cheerfully horrible. Most RPGs have you clicking on an enemy and constantly fighting until you throw in a special move or maybe some magic or potions. The Witcher has you clicking for each sword move and being able to chain attacks together to create combos that inflict massive damage. This is fine, but the game seems to be pretty random in when it recognises a mouse click or not, and some chains unleash some unfeasibly long animations in which it's unclear if your mouse clicks are having any effect and other enemies are hitting Geralt continuously. Beat 'em up style combat in an RPG has worked very well before - in Jade Empire - and since - in Dark Souls - but in The Witcher it doesn't really work at all. This is not helped by the fact that getting through the game on any difficulty higher than Easy also requires the use of alchemy to make potions and bombs. For those who find alchemy mind-numbingly dull and don't fancy spending a fifth of the game picking flowers, there's no easy way around this. It also doesn't help that alchemy often completely destroys balance. After trying to get through the game's climactic fight with an evil wizard several times through combat alone and dying horribly, I downed one of the basic potions in the game (make me invulnerable to knockdowns) and promptly killed him in less than a minute. 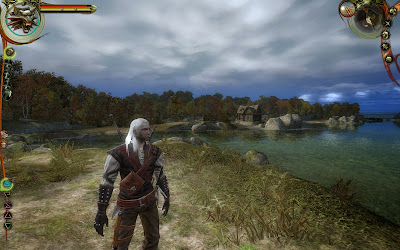 Geralt gazes moodily across an atmospheric landscape whilst musing on his woes. This happens a lot.

Fortunately, magic is handled a lot better and is deceptively powerful: The Witcher's spells are rarely visually impressive but they do tend to pack a lot of damage once you've put more skill points into them. Frankly, without magic (and my trusty Ignii spells) I would not have been able to complete the game as combat alone is so astonishingly terrible. The game is also refreshingly conservative in giving you skill points, with it being almost impossible to max out more than a couple of skills in a single playthrough. This forces more tactical decisions on where to put your advancement points. The game also avoids some unnecessary inventory management (fortunately, as your inventory is absolutely tiny) by giving Geralt two special swords at the start of the game which are periodically upgraded. This prevents you from having to stat-compare every sword you find on the off-chance it's better, unlike other RPGs like Dragon Age.

Graphically, the game looks pretty good. Though based on the ancient Aurora Engine (first used for the 2002 game Neverwinter Nights), CDPR have completely reworked it to produce far more stunning visuals. It still looks pretty good today. The motion-captured combat animations are also astonishing. Clicking the mouse like a nervous rodent may be tedious, but the results with Geralt rolling, spinning, kicking, back-swiping and occasionally knocking enemies back with the hilt before decapitating them are all smooth and stylish. There's a fair amount of blood in the game, but unlike Dragon Age it doesn't go berserk and leave you coated in gore after every fight. The graphics in the swamp (despite it being the most annoying RPG gaming location of all time) are extremely atmospheric, the lighting is great and the game nails the atmosphere of a medieval city convincingly.

Aside from the combat and occasionally non-existent explanations for what the hell is going on, the game's biggest flaw is its confused approach to gender politics. The game features several strong female characters and women are shown working as soldiers in armies and having tremendous magical powers. However, it also allows Geralt to have sex with about half of female characters in the game (with no consequence: witchers cannot bear children due to the drugs they have to take to gain their powers, and Geralt's proper long-term girlfriend is pretty broad-minded) and collect 'cards' to show the success of his conquests. Female characters (both human and not) also appear fully nude in the game whilst the men (and Geralt) keep their clothes on at almost all times. It's a tawdry and weird thing to put in the game, though arguably the open-minded approach to sex and sexuality is refreshing compared to its non-existence in most other games.

In summary, The Witcher (***½) looks good, has a refreshingly focused storyline (no 'save the world' nonsense here) and some really impressive character development. Its depiction of choice and consequence is up there with Black Isle/Obsidian at their best, and its moral ambiguity is refreshing after so many tediously moralising games where everything is either good or evil and nothing inbetween. On the negative, it has a confusing attitude towards sexism, the combat is utterly atrocious and the game is a little over-reliant on fetch quests and toing and froing between a relatively small number of locations (the game gets a lot of mileage out of limited assets without being too obvious about it). It's also far too long, clocking in north of 50 hours to complete. What it does do, however, is shake CRPGs out of their complacency and bring some very interesting new ideas to the table. Despite the negative, it's definitely worth playing. It is available now on PC in the UK and USA. Its sequel is The Witcher 2: Assassins of Kings, available now. The Witcher 3: The Wild Hunt will conclude the saga when it is released in 2014.
Posted by Adam Whitehead at 12:27

Slightly OT, but I was glad to see you mention Dark Souls. I would really love to hear your take on it sometime. For my money, its the best game of the generation. Do you have any plans to tackle it at some point?

You mentioned the clicking of the mouse in combat.
There are certain moments you're supposed to click to continue the chain. It works fine once you figure it out. I enjoyed the combat and thought it was quite good. But I haven't played that many games, and I only just finished the Witcher a month ago.
Re the gender stuff. I dunno, maybe there are some whatevers there, but it is what it is.
It's heavily male-hetero biased, but that's what it is. The sex cards and all that were funny and overall I really liked it.
So much so that when I then launched the witcher 2 I couldn't even get through the tutorial before I closed it, favouring the witcher 1.