A few months ago open (legal) warfare broke out over the ownership of the movie rights to Dungeons and Dragons. Sweetpea Entertainment, the production company responsible for the disastrous 2000 movie starring Jeremy Irons and two (even worse) direct-to-DVD sequels, announced they were developing a new, big-budget movie with Warner Brothers. Hasbro, who own the D&D tabletop game via their subsidiary Wizards of the Coast, fired back that Sweetpea's film rights had expired and Hasbro was now developing a film franchise with Universal Pictures. Hasbro then sued Sweetpea to stop their project going into development. 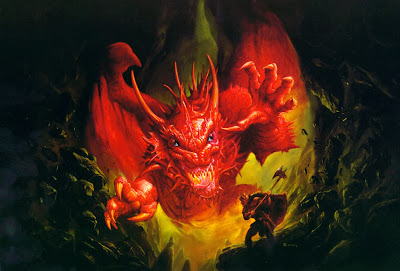 The point of contention is that the D&D movie rights were sold in the late 1990s, when TSR (the original company that created the game) was sinking into financial ruin and was in dire need of funds. Their deal with Sweetpea, in the person of Courtney Solomon, was born of desperation and featured clauses that Wizards and Hasbro (who bought TSR in 1997) disagreed with, but were unable to contest. However, the deal also included clauses forcing Sweetpea to release a new D&D movie every five years or see the rights revert to the licence-holders (in this case, Wizards of the Coast and Hasbro).

According to Sweetpea, the second and third D&D movies (entering production in 2005 and 2010 respectively) fulfilled this obligation. However, Hasbro has claimed that the second movie being a TV movie (it debuted on SyFy just before it was released on DVD) and the third being a direct-to-DVD movie did not satisfy the clause, due to them not being theatrical releases. As a result, Hasbro claim that the rights have lapsed, leaving them free to develop a new project.

Sweetpea have now counter-sued Hasbro, demanding that their ownership of the movie rights be respected and seeking a ruling preventing Hasbro from using D&D branding and all use of copyrighted D&D elements included in the original deal in any future film project. A hearing has been set up for 25 March, 2014.

If Sweetpea wins the legal case, it leaves Hasbro in the awkward position of being able to proceed with a film based on spin-off properties (including the Forgotten Realms setting and the Drizzt Do'Urden character) but only if they do not use any core elements included in the original Sweetpea deal, including most of the iconic D&D monsters and spells.

Hopefully the March ruling will clear up the mess. As for who to back, I think three disastrous films in succession show that Sweetpea and Solomon should not be allowed to continue developing the film franchise. There's not much Hasbro can do to make things worse, and at least they'd make sure the new film would have a big budget and likely a name director. Sadly, aesthetic and creative arguments will not carry the day, with both sides deploying big-hitting Hollywood lawyers to make their case in court.
Posted by Adam Whitehead at 20:23

Sounds like a money thing to me. Sweetpea is trying to leverage Hasbro to give them a pile of money for the movie rights.

Just because you don't 'like' the 3 bad movies Sweetpea has made, you are backing having their property rights and contractual rights violated?

If the original contract stated a 'movie' has to be released every 5 years, and there is no clause to state this movie must be a theatrical release, then Hasbro has no claims to this franchise.

I would prefer this franchise was in the hands of a talented company as well Adam, but imagine a world where everyone's property rights can just be swept away on such an ad hoc basis. Actually we already are there....

@ Ghost: Sweetpea - somehow - make money on the films. The first D&D movie was a major bomb, but the financial burden fell mostly on New Line, who backed it. The second and third films cost almost nothing to make and seem to have turned a tiny profit through TV and DVD sales. Due to the 5-year clause, Sweetpea will need to put a new film into production (whether that's the big budget Warner Brothers deal or another quick and cheap film) before the end of 2015 to retain the rights in any case.

@ Yohan: to be clear, I agree the legal agreement should be upheld. I only spoke to what result would give fans the best film, and after three awful films in a row I think it's hard to argue that even a Michael Bay-directed movie for Universal would be worse.

As for the legal agreement, if it was stipulated that the films had to be released in a certain manner and Sweetpea broke that agreement, then Hasbro do have every right to uphold their legal rights. The contention seems to be more for the third film (the second was released without comment, and IIRC WotC did some tie-in stuff for it in 2005) as a direct-to-DVD release without being in the cinema or on TV first. In addition, it was released quite late (2012, after being shot in 2010) and there may be some discussion about whether that was upholding the 5-year-rule.

There's also the issue of the spirit of the agreement. The spirit was certainly that Sweetpea should get a good, enjoyable D&D movie made, preferably with a big budget and for the cinema. By making cheap and quick, terrible movies solely to hold onto the rights until they can make more money out of them, they have certainly violated the spirit of the agreement, if not the legal minutiae.

'Copirastia' we call it in Russia

I enjoyed the second film. The first doesn't hold a candle to it.

If I ran Hasbro, I would hit Sweetpea with a hostile takeover, provided that they aren't already owned.

There was a cheap and dodgy Fantastic Four movie done in the 90s so the company could keep the rights for their two big budget movies. It happens all the time, Hasbro should just offer money to get the rights back, or just do a new "Forgotten Realms" - make everything different enough to get around copyrights of the original material.