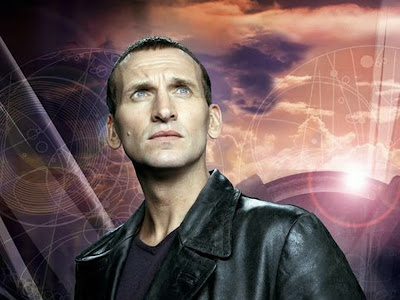 Christopher Eccleston (1964-  ) played the Ninth Doctor in 13 episodes airing over one season. He had three companions. His short tenure introduced the Face of Boe, the Slitheen and Captain Jack Harkness, as well as the concept of the Time War.

With Doctor Who confirmed to be returning to British television screens in 2005, Russell T. Davies began assembling a new production team and making decisions on casting and what villains should return. Early on Davies decided that the new series would pick up after the previous one, but with a fresh slate. Despite the actor being willing and popular with fans, it was decided not to retain Paul McGann and to avoid cumbersome exposition by not filming a regeneration scene. When considering a new lead actor, Davies's first choice was Christopher Eccleston, whom he had worked with on The Second Coming. Having enjoyed his previous work with Davies and excited by the scripts for Doctor Who, Eccleston agreed to take on the role.

Eccleston had built up a reputation as a serious and intense character actor. He had been particularly acclaimed for his roles in TV dramas such as Cracker and Our Friends in the North, as well as The Second Coming. Arguably, he was better-known than any previous actor who'd taken on the role of the Doctor (maybe barring Jon Pertwee). Unlike the previous Doctors, Eccleston's incarnation did not employ a flamboyant costume. However, the same mix of seriousness and whimsy was present. 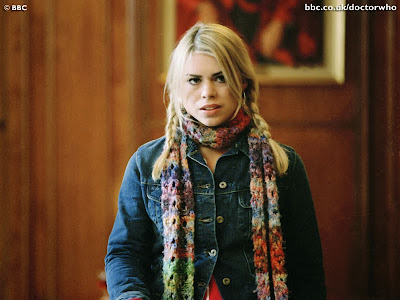 For the first time in the show's history, the role of the companion was billed as the series lead alongside that of the Doctor.

Whilst Davies was keen for the new show to follow on from the original, he wanted to introduce an in-universe reason to separate the two out. He decided that a massive Time War had been fought in the interim between the Daleks and the Time Lords, of which the Doctor was one of the few survivors. Initially the Terry Nation Estate was unwilling to let the BBC re-use the Daleks, but intense negotiations resulted in permission being given late in the day; one script (which later became the episode Dalek) had two versions written, one featuring a Dalek and another a new alien. Davies decided that the new series would consist of stand-alone episodes and a couple of two-parters (so the classic Doctor Who cliffhanger could be retained), but it would also employ tighter, ongoing continuity as was fashionable in modern SF dramas. In this case, the Doctor would constantly encounter references to something called 'Bad Wolf' that would only be explained in the season finale. The series also employed an ongoing development of the relationship between the Doctor, his new companion Rose Tyler (played by ex-pop star Billie Piper) and her boyfriend and family back home.

The new season - officially the first season of a new series, but counted by many fans as Season 27 - debuted in March 2005. The first episode, Rose, picked up 10 million viewers and positive reviews. The thirteen-episode season was overall well-regarded, though criticisms were made of an occasionally juvenile tone, most notably with regards to the 'farting aliens', the Slitheen, and rapidly-dating references to contemporary British culture. The latter part of the season saw an upswing in quality, with the Doctor and Rose joined by a new companion, Captain Jack Harkness (played by John Barrowman) and confronting a resurgent force of Daleks in the two-part season finale. 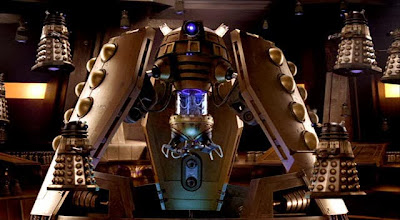 The Daleks proved to be instrumental in the storyline for the new series.

Even before filming of the first season was complete, Christopher Eccleston decided to leave the role (despite early interviews suggesting he might stay for two or three years). He cited the show's filming schedule and workload (it took over six months to record the series, with the Doctor in a majority of scenes) as something he was uncomfortable with. Though sorry to see him go, Davies did take advantage of the fact to give the new viewers their very first regeneration scene. For the role of the Tenth Doctor, Davies again did not have to look very far. His mini-series Casanova had been in production simultaneously with Doctor Who and Davies had been very impressed by the performance of lead actor David Tennant, himself a keen Doctor Who fan. Tennant was offered the role during a press screening of Casanova and accepted. He quickly filmed an insert for the regeneration scene (which had been filmed months earlier) showing the completion of the transformation.

Despite the bump of Eccleston's relatively abrupt departure, Doctor Who's return was an unqualified success. Ratings hovered around the 10 million mark, an impressive feat for a drama show airing on Saturday evenings, and reviews were mostly solid. The show was showered with awards for that year, including two BAFTAs and three National Television Awards. However, the success was initially confined to Britain: the American Sci-Fi Channel showed the series a year after the original transmission, but it attracted little attention in the States at this stage.

The Ninth Doctor regenerated at the end of The Parting of the Ways after absorbing the energies of the Time Vortex to save his companion, Rose.

After Tennant, the 2nd-best recent Doctor in my book!

I came to Doctor Who thanks to the 2005 reboot, and Christopher Eccleston was my first doctor. I had no idea the Time War was created for the reboot? I do wish he'd stayed with the show for another season or so, I do love Eccleston's mix of zany and serious, often within the same sentence.

Father's Day is one of the best Who epidoses ever in my opinion.

I love the idea of the "Time War" that they came up with, serving as a meta-level analogue for the missing 16 year gap of the "Wilderness years". It conveniently gave the new (or rather "returned) series a fresh slate, while still letting it be the same continuity.

It was a good metaphor/analogy for losing the show for a decade and a half.

True story: My family, living in the New York City area, was deeply annoyed that they didn't air the Ninth Doctor's new series on TV here. This was 2005, a bit before high-speed downloading became utterly ubiquitous and commonplace.

However I was at university at the time, further north in the Boston area....and thus our university's cable TV package included the *Canadian* channel CBC, which DID carry the Ninth Doctor episodes - airing only a week or two behind Britain.

So this was old school, "circulate the lost episode tapes at conventions" stuff - I'd record them off of my TV on VHS tapes at my University dorm, then excitedly bring them home to share around.

We *cheered*, the whole room actually *cheered* when at the end of the fifth episode the trailer for episode six aired, announcing the return of the *Daleks*!