The Dragonbone Chair by Tad Williams

Prester John is the unchallenged High King of Osten Ard, the ruler of all the lands from the Nornfells to the southern deserts. He has ruled wisely and well - but not without bloodshed - for seven decades. Now his health is failing and his son Elias prepares to inherit the throne. Elias is strong and a canny general, but is also mistrusted for his close relationship with the sinister priest Pyrates. There is also a growing rift between Elias and his younger brother Josua Lackhand that threatens the peace.

Simon, a simple kitchen boy in the High King's castle, the Hayholt, is drawn into events beyond his understanding. A cold winter is coming, things are stirring in the far north that have not been seen for centuries and the fate of the world will turn on three lost swords: Memory, Sorrow and Thorn.


The Dragonbone Chair is the opening novel of Memory, Sorrow and Thorn, a massive trilogy written by American author Tad Williams. First published in 1988, the novel was an important milestone in the development of epic fantasy. Previous fantasy novels had been split between easy reading versions of Tolkien (Brooks, Eddings) or insanely dark reactions to it (Donaldson, Cook), but Williams's novel was arguably the first to really engage with Tolkien on the same kind of playing field. It's a huge book (over 900 pages in most paperback editions, and only the first part of the story) filled with a complex backstory, numerous ethnic cultures and different races, lots of made-up names and maps. Lots of maps. And an appendix, just to show you that this author means business.

The answer is a qualified yes. This is a big, epic story which Williams tells well, with some colourful prose, some solid characterisation and development and a bit more depth to the story than it just being another Tolkien clone. The (relatively few) action sequences are well-handled and there are some evocative descriptions, particularly of the vast Hayholt and its Green Angel Tower, as well as the forbidding Aldheorte forest. The characters are a fairly diverse and interesting bunch, although Simon himself, at this early stage, is a bit too much of a wet blanket with a tendency to pass out (either from injury or magically-induced visions) every time something important happens. His companions, particularly the "troll" Binabik, are altogether more compelling in this first novel. 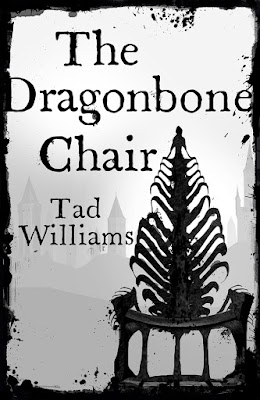 The book also constantly develops and restructures the stakes and the scope of the story as it goes on, bringing in more history, factions and people as it develops. This works in both the Tolkien-esque sense of starting small and branching out later on, and also in forcing a constant reappraisal of the world and the situation. It's telling to see how Prester John is viewed by his own people as a mostly just and benevolent ruler but people from other lands remember him as a conqueror.

There are some structural issues. The book can switch POVs several times in a conversation, which is a bit bewildering for those readers used to the modern convention of staying with one POV for a whole chapter, or for POV switches to be marked by at least a paragraph break. This is also not exactly the fastest-paced novel in the world. Compared to Lord of the Rings, The Eye of the World or A Game of Thrones, The Dragonbone Chair (which is only marginally shorter than the latter two) drags its feet a little. Williams is a good enough writer to make lengthy travelogues or conversations between two minor characters hold the attention, but you do realise from time to time that not actually a lot has happened in the previous hundred pages. Finally, the POV structure can be a bit jarring: much of the first half of the book is shown from Simon's POV, but the latter half introduces a ton of other ones, including some who have an important role to play but we only get a few pages with them because so much time is being spent elsewhere.

But these are both standard (for the genre) and forgivable problems, especially given that this was only the author's second novel. The Dragonbone Chair (****) may be slow to get off the mark and occasionally low-key given the scale of the events, but it's a well-written novel that is rather smarter than it first appears (this becomes more apparent in the sequels). It's well worth checking out ahead of the publication of the sequel series, The Last King of Osten Ard, due to start in 2017. The novel is available now in the UK and USA.
Posted by Adam Whitehead at 18:09

Just finished this book about a month ago and I couldn't agree more with what you write here. I'm looking forward to reading the rest of the series soon.

I read these when I was about 14 or fifteen and when I heard that he was writing some more I had to get them to re-read.
I think that you are pretty spot on with this review, however remember that Simon is a wet blanket, but also Williams does a good job of portraying how immature and ecocentric 14-or-so yr old boys can be.
The thing that is so good about Williams writing I think is that he manages to do the world building seemingly effortlessly. This means that he doesn't have to bluntly inject motivations for his protagonists as they are driven and motivated (by drawing you in) by the real world and events around them.
Haven't finished yet, but I think his Shadowmarch series was a much more refined version of this series after he had honed his craft and style. Probably has the best villain he has ever written in it too, which helps.