A History of Epic Fantasy - Part 7

For many writers of epic fantasy, the primary reference point is J.R.R. Tolkien and The Lord of the Rings. However, in the 1970s another way of enjoying fantastic fiction arose. This was in the form of roleplaying, pen-and-paper games that allowed players to create characters and take part in narrative adventures of their own. 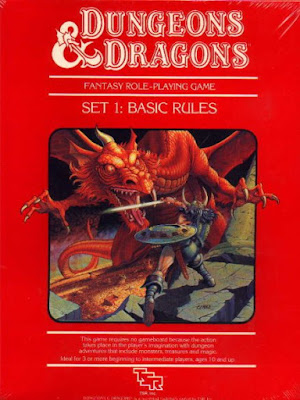 Roleplaying can be defined as a meeting of spontaneous improvisation - where people have to play a character and react to rapidly changing situations as their character would, not themselves - and board games. Americans Gary Gygax (b. 1939) and David Arneson (b. 1947) were avid players of board games and wargames, elaborate recreations of historical battles using miniature figures. The two gamers met in 1969 at the second Gen Con gaming convention in Lake Geneva, Wisconsin. Their shared love of naval combat games led to them creating their own naval wargame, Don't Give Up the Ship!

The two gamers were still working with miniatures but were slowly moving towards what would become the more familiar form of roleplaying. Arneson had created a board game without a (permanent) board called Blackmoor, in which the players created characters who used medieval technology in a fictional realm, initially highly fantastical but then drawing on science fiction ideas. In 1971 Gygax had created a miniature game called Chainmail which recreated medieval combat and featured rules for armour and weapons. He also produced a fantasy supplement, which added monsters, elves and a small number of magical spells.

In 1972 the two designers met again and compared notes. Gygax saw the appeal of welding miniatures-style combat rules to Arenson's free-flowing Blackmoor idea and experimented with this himself, beginning a series of nascent roleplaying adventures in a land called Greyhawk. Seeing the potential, they collaborated on a rule set. This became the very first edition of Dungeons and Dragons, released in January 1974.

In D&D, players create characters who belong to one of several races (humans, elves, dwarves, gnomes and halflings are the standard races; optional rules allow players to control everything from fairies to dragons) and who also play one of several classes or occupations (warrior, barbarian, monk, paladin, wizard, priest, druid and bard are among the most typical classes). The players then have to roleplay their characters, explaining how and why they have joined forces to form a party of adventurers. Another player, the Dungeon Master, then runs the adventure, describing the scenery and adversaries the party has to face and playing all of the other parts in the game. In return for achieving successes, the players gain experience points and can "level up", gaining additional abilities and bonuses to attack and defence. There is no board, with the players and DM instead describing what is happening orally and the game being dependent on communication. Early D&D focused on exploring underground dungeons and ruined castles in search of treasure. However, the game rapidly expanded to include adventures in cities, on the high seas and everywhere players could conceive of.

The generic fantasy backdrop to D&D is often said to have been ripped off from Tolkien. However, Gygax always denied this. Although he'd been a fan of The Hobbit and had included halflings in the game as tip of the hat to it, he disliked Lord of the Rings. Instead, he drew on other sources such as Fritz Leiber (whose Lankhmar setting Gygax later licensed as a D&D setting; he paid Leiber so much money for it that Leiber was able to live off the deal for several years) and, most notably, Jack Vance. D&D's magic system is in fact pretty much identical to that in the Dying Earth series of novels, even down to some of the spell names. Other writers such as Robert E. Howard were cited as inspirations. 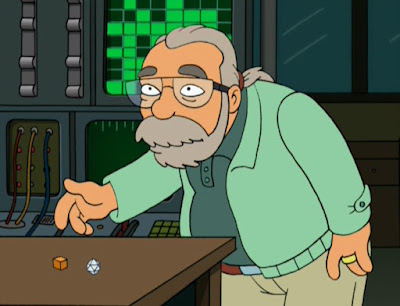 Gygax as depicted in Futurama.

A modest success at first, D&D exploded into a wider form of popularity with the release of Advanced Dungeons and Dragons in 1977, which dispensed with the previous box set design and emphasised play using just the rulebooks and dice, with no miniatures necessary (although optional rules for their use remained). The game was rebooted with new editions in 1989, 2000, 2008 and 2014. As of last year, Hasbro (the current owners of the game) had estimated that a conservative minimum of 20 million people had played D&D and the game had sold more than $1 billion worth of materials.

Other roleplaying games followed, such as Marc Miller's  Traveller (1977), Steve Perrin's RuneQuest (1978) and Superworld (1983), Steve Jackson's GURPS (1986), Mike Pondsmith's Cyberpunk (1988), and a series of highly influential RPGs from Jordan Weisman: MechWarrior (1986), Shadowrun (1989) and Earthdawn (1992). There was also the Star Wars title from West End Games (1987) which was important in establishing the now-defunct Expanded Universe and pinning down names and terminology for a lot of the worlds, races and technology in the setting. However, Dungeons and Dragons remained by far the biggest of them all.


The impact of D&D on fantasy was notable. Studying at San Diego University in the late 1970s, Raymond E. Feist was introduced to the game by his friends. Unimpressed with the existing rules and settings, they began changing things around and developing their own setting. Steve Abrams did a lot of work in the creation of this world, which was dubbed Midkemia. In 1977 Feist asked if he could try writing a novel set in that world, to which his colleagues agreed. This became the seminal novel Magician, eventually published in 1982.


In 1981 two young Canadians named Steve Lundin and Ian Esslemont started playing a game of D&D with a group of friends and began developing their own fantasy world. However, they found the rules limiting and became more interested in narrative roleplay, focusing on tragedy rather than heroism. The release of GURPS (Generic Universal Role Playing System) in 1986, which encouraged a more freeform style of play, saw them add a lot of weight and colour to their world. Shortly afterwards Esslemont wrote very early versions of novels he called Night of Knives and Return of the Crimson Guard (published, after many delays, in 2004 and 2008 respectively). Around the same time Lundin wrote a film script he called Gardens of the Moon. Unable to interest anyone in it, he re-tooled the script as a novel in 1991; eventually (under the pen-name Steven Erikson) it was released in 1999 as the first volume of The Malazan Book of the Fallen. 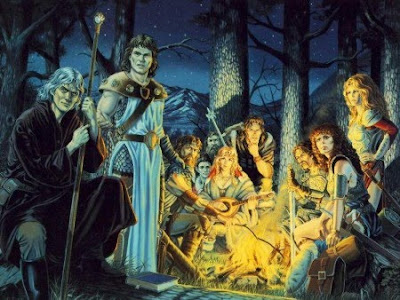 Even more established writers got in on the act. In the late 1970s a writer named James Oliver Rigney started running games of D&D for his stepson Will. Shortly afterwards he was contracted to write a series of new Conan novels under the pen-name Robert Jordan. He was also just beginning to come up with an idea about a fantasy world where only women could use magic and where magic had a precise set of guiding rules, much like the D&D magic system. The influnce of D&D on The Wheel of Time is debatable (Jordan never cited it as a major inspiration), but it is interesting that the biggest epic fantasy author after Tolkien (so far) at least dabbled with the game.

Around this time George R.R. Martin, recently moved to Santa Fe, New Mexico, discovered roleplaying. He enjoyed it as a pastime, but it didn't really grab his attention until he was given a copy of Superworld in 1983, which allowed the players to become superheroes. Martin soon began running an epic adventure for his players and collaborators. After a couple of years of focusing on the game rather than his novel-writing career (which had stalled with the failure of The Armageddon Rag), Martin hit on the idea of using the game as a source for fiction. The result was the Wild Cards anthology series, which began in 1987 and is still running today.

Dungeons and Dragons itself did not initially inspire much in the way of fiction directly based on it, despite the release of several different campaign worlds or settings for the game. The first proper D&D novel was Quag Keep (1979), written by none other than the highly-regarded Andre Norton, but fiction deriving directly from the game was not particularly successful until 1984. In that year Margaret Weis and Tracy Hickman released Dragons of Autumn Twilight, the first novel in The Dragonlance Chronicles, which went on to become one of the biggest-selling epic fantasy series of all time. In 1988 R.A. Salvatore released the Forgotten Realms novel The Crystal Shard, the first novel featuring his dark elf hero Drizzt Do'Urden, a series which went on to be even bigger and more successful.

Dungeons and Dragons had a big impact on the field of fantasy. It consolidated a lot of ideas (some previously originating with Tolkien and other authors) that would become important in the subgenre as it developed, such as worldbuilding, magic, the various races and the idea of a "party" of disparate individuals coming together for a common cause, as well as both inspiring epic fantasy authors and, through its spin-off novels, directly starting the careers of numerous others.

But the modern fantasy genre hadn't quite come into being yet. The groundwork for that was laid at the very end of 1976 when a successful science fiction author and editor named Lester del Rey established a new imprint for Ballantine Books and started looking for authors to kick the line off memorably.
Posted by Adam Whitehead at 19:46

Adam, this is a tremendously enjoyable series - thank you.

Yes, excellent series of articles. Keep it up! Good work!

In addition to books, role playing games had a strong influence on the fantasy genre. But what about other mediums? Comic books have had a great impact on many writers. The same with cartoons, which often mixed both fantasy and science fiction. Cartoons like Transformers, ThunderCats, Galtar and the Golden Lance, He-Man and the Masters of the Universe, Dungeons & Dragons (very little in common with the game), Thundarr the Barbarian, Inhumanoids, Ghostbusters, and Pirates of Dark Water and so on. Of all the fantasy writers that's around today, I assume at least some of them grew up watching some of those shows.