2036. Earth is under the control of the Observers, time-travelling, genetically-engineered and cybernetically-enhanced humans from a distant future in which the planet has become uninhabitable. During their previous observations of the Fringe team and their investigations, they have confirmed that it is possible to rewrite the timeline and create a new reality, so now they plan to create a new world for their benefit...but not for that of the humans who are already there. 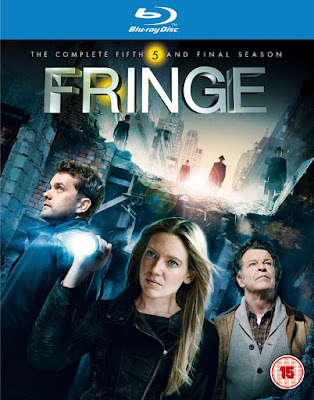 Frozen in amber for twenty-one years, the Fringe team awaken with one goal: to stop the Observers from fulfilling their mission. But with a vastly superior foe tracking them remorselessly, the team need every ally and every resource they can call upon in order to succeed.

For its final season, Fringe changes things up a lot. What had once been a procedural, investigative drama about the paranormal and pseudoscience has become a full-on nightmare dystopia, throwing in some elements of post-apocalyptic drama for good measure. These thirteen episodes form a tightly serialised drama (the writers deciding the sops to the casual viewer are no longer necessary) taking in questions about what it means to be human and how far you will be prepared to go to save your existence.

There are a few problems with the situation. First off, a fair bit of important stuff happens off-screen: four years pass between the end of Season 4 and the moment the Observers actually invade, including some important character development and also further developments involving William Bell. Bell's character arc simply disappears and we don't find out the fate of his character or what happened since the last time we saw him to explain his changed relationship with Walter and the rest of the team. Some hasty exposition from other characters doesn't really help. It's a problem that can be ignored for the most part, but the lack of resolution for this key character at a moment when pretty much everyone else gets wrapped up nicely feels a bit of an oversight.

More of an issue is that the compressed storytelling and the near-omnipotence of the Observers results in what feels like plot holes. The ability of the Observers to foretell the future and how far they can do their teleporting trick shifts episode from episode based on the requirements of the plot. It's not quite as bad as the tricks some shows go to in order to nerf overpowered villains (the Borg, anyone?) but it again feels a little too inconsistent even given Fringe's elastic standards of plausibility.

Fortunately, most of that can be ignored. The final season of Fringe is a bold, experimental one that throws out the standard format, changes dynamics all over the place and tries to be the biggest, most epic season on a reduced budget. Thanks to some excellent CGI (the paved-over Central Park is an impressive achievement), some very strong writing and some brilliant performances from the regulars and newcomers alike, the season is pretty gripping. By now it's gotten redundant to say that John Noble is fantastic in every scene he does (although a scene at the end of the first episode involving early 1980s electronica is particularly outstanding), but it's good to see Joshua Jackson stepping up to the mark. Jackson has pinballed between Plot Device and Exposition Giver for most of the previous four seasons (although always played gamely), but in Season 5 he gets a bit more material to play with and handles it well. Blair Brown also gets a terrific story arc as Nina this season, possibly by way of apology from the writers for giving her some pretty bad material in the Season 4 finale to work with. Georgina Haig also does some great work, stepping into the established cast as Henrietta.

The biggest success of the season, though, is giving a definite sense of closure to the series. Coming from some of the same creators as Lost and being heavily influenced by The X-Files, the fear was that Fringe would, like those shows, have a muddled and unsatisfactory resolution to a long-running and confusing story arc. It doesn't. Instead Fringe nails the landing more than satisfactorily, giving a good sense of closure as well as explaining most (but not all) of the show's long-running mysteries.

The final season of Fringe (****½) concludes the series with style, giving a satisfying resolution to the show, its mysteries and, most importantly, to the characters. Fringe, tragically, is one of the more obscure SFF shows of recent years which is a shame, as it is also one of the best. The final season is available now in the UK (DVD, Blu-Ray) and USA (DVD, Blu-Ray).
Posted by Adam Whitehead at 20:55