The third season of Orphan Black has finally hit UK screens, although in an unexpected way. 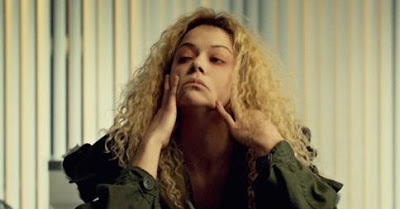 Helena was resolutely unimpressed at the BBC's dicking-around antics.

The first season of the critically-acclaimed SF show aired on BBC3, several months after the original Canadian/American transmission. Season 2 then aired just a couple of days after the North American airing. It was assumed that this pattern would be repeated for Season 3, but the BBC oddly sat on it and refused to say when it would air. And then today the first eight episodes of the season were released simultaneously on the BBC iPlayer.

The bizarre release pattern may be a test run for the future of BBC3. The channel will go off-air next Spring, its content instead transitioning to the iPlayer only. The BBC may be looking at the numbers from Orphan Black for an indication as to how well it will do. Which is nice, but I would submit that if they want this to be more successful they need to 1) actually advertising the show and 2) not wait until six months after the season has aired in the States and Canada.

Anyway, after a lengthy delay it's good to be able to watch the season at last.
Posted by Adam Whitehead at 23:01