A History of Epic Fantasy - Part 11

1984 represented another shift in the evolution of epic fantasy. Most of the books published up until this point had been adventure stories, either derived from Tolkien or bringing in their own ideas. With the exception of Donaldson, the darker side of fantasy remained relatively unexplored. 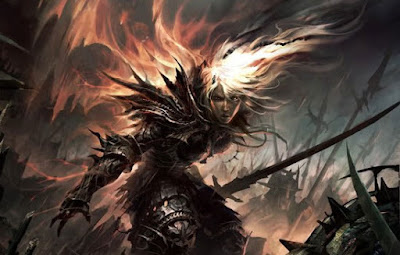 That changed with the release of two novels on opposite sides of the Atlantic, both from authors interested in the idea of heroes and morality. Unusually, it was the American author who took the more cynical viewpoint, painting a picture of a dark world terrorised by an amoral and ruthless empire...who the protagonists are working for. The British author also took a downbeat, maybe even more realistic view of war and politics, but also used that to make his heroes shine all the more strongly.

American author Glen Cook had served in the US Navy before starting work at General Motors, in an auto assembly plant. The job was not mentally taxing, so Cook was able to spend his work days conceiving ideas for stories and novels. One of these was about a mercenary outfit, the Black Company.

The Black Company worked for money and for something to do: they were not "evil", as such, but had no issues working for more morally dubious employers. Over the course of the eponymous first novel, they start working for the Lady, a powerful sorceress whose armies have overrun the land and now rule with an iron fist. However, as the series continues they discover the fate of the world itself is at stake and, as much out of self-preservation as anything else, decide to take a stand.

The Black Company and its sequels (Shadows Linger and The White Rose in the initial trilogy, with more books following intermittently) dealt with interesting questions of relative morality and how far you can go down the dark path before you can go no further. The notions of there being such a thing as a "just war" and that people can be unaffected by war or suffering are rejected. But there is also room for forgiveness: the primary antagonist of the first trilogy becomes a leading "hero" of the later books and arguably atones for her crimes, but never repents them fully.

The Black Company and its sequels are also notable for combining military tropes with what can also be called flat-out weirdness: magical trees, windwhales and a sentient menhir alarm system contribute to a series whose grim tone and reputation occasionally mask a genuine sense of the fantastic and some whimsical (if dark) humour.

Up in Canada, a young pair of budding writers named Steve Lundin and Ian Esslemont were reading with interest, and taking notes.

David Gemmell came from the school of hard knocks. Born in the aftermath of World War II and growing up in a tough part of East London, Gemmell got into trouble in school, was taught how to box by his stepfather and had a number of jobs including a nightclub bouncer and a labourer. Writing was perhaps an unlikely-seeming profession, but Gemmell had a love of reading as a child, particularly of history. His mother arranged for him to have an interview at a local newspaper, but he got the job more for his take-no-prisoners attitude than his actual writing skills.

In 1976 Gemmell was diagnosed with cancer. Believing his time was limited, he decided to write a fantasy story he'd had knocking around in his head. He completed The Siege of Dros Delnoch in two weeks before learning that he'd suffered a misdiagnosis. A friend read the manuscript and urged him to expand it into a full novel. Gemmell completed the book in 1982 and it was published in 1984 under the title Legend (no relation to the Tom Cruise movie released a few months later).

Legend tells a fairly straightforward story: the northern barbarians have united under a new warleader and are now marching on the Drenai Empire, which they believe is weak and vulnerable. The only obstacle is Dros Delnoch, a fortress defending a narrow mountain pass. The defenders are outnumbered fifty-to-one but amongst their ranks is a legend: the great warrior Druss, wielding his axe Snaga. Old and failing, haunted by the prophecy that he will fall at Dros Delnoch, Druss must take a stand alongside his people.

Legend is a book that also has a cynical and dark tone, but is not as nihilistic as Cook's work. Gemmell's philosophy is a shade different, namely that true heroism comes from the darkest hour, that people will be tested and some will fail, but a few will not. He does not believe that heroes are perfect or flawless, but they are heroes because they overcome those flaws to achieve things greater than they are. Legend's message is simple but delivered with brutal, stirring efficiency to make it one of the most well-regarded fantasy novels of all time. Gemmell passed away in 2006 whilst telling another story about a brutal siege (this time at Troy) but his legacy was secured when the David Gemmell Legend Award for Fantasy, the most popular award for epic fantasy, was named in his honour.

By the mid-1980s fantasy had become a bigger and more successful genre, but one that was dominated by male authors. However, more women were starting to write in the genre and several key works by female authors emerged at this time, drawing on Celtic mythology, Chinese politics and an absolutely massive number of dragons.
Posted by Adam Whitehead at 21:43

I have read all the Black Company books in the last few months, and that series is simply amazing. I have heard some people complain about the last few books, but I honestly think it was pretty consistently great throughout. Surprised by how well it ended.

Nice that you pointed out all the weird creatures in it, it made the series feel a bit more unique

This Is a really stunning collection of articles, it is the first time I can see an organic view of all the book I red. Would you consider turning it in an ebook form? I would buy it!

Also, this is an excellent buying guide, why do not you set up Amazon links to get something out of the transaction yourself?

Only recently came across your blog, just wanted to say thanks.
Fantastic reading always, but your history of fantasy series in particular.
Also really happy about the frequency of your updates - not many sites that provide the same frequency and quality.
Looks like I've got lots of new book suggestions to check out!

Ah, two of my favorites. I never considered Gemmell as dark, though. Too much heroism against evil, which I dig. Leagues better than Phil Pullman, Prince of Thorns, Prince of Nothing nihilism.

Great series of posts Adam. Gemmell is still my favourite author. They are all fairly simple books but they he writes in a way hat gets me every time. Still gutted he passed away. So many of his books would make great films, hopefully it will happen sooner or later.

Well done on these posts, I've read much of what you are posting but there are some real treasures that you are letting others know about. I will check out the Megan Lindholm stuff now. Gemmell is fantastic and a great "starting" fantasy author imo.

I unfortunately read The Black Company Trilogy after the Erikson novels and felt that it was too similar to what I had been reading. I think Cook could almost sue for copyright breach tbh.
Anyway keep up the excellent posts.