2056. A youngster from Seattle, raised in tough conditions and left behind when their foster-father, Raymond Black, moved to Hong Kong, is summoned to a meeting with him. Also attending is Duncan Wu, another orphan raised by Black. The meeting turns out to be a trap set by corporate police. Soon both of Black's wards are on the run. Their only hope is a disreputable triad boss, who agrees to help them on the condition they accept a new life as shadowrunners in their employ. 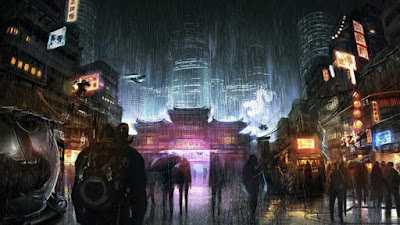 Hong Kong is the third game in the Shadowrun Returns series of games, following on from Dead Man's Switch (2013) and Dragonfall (2014). Like those games, Hong Kong is an isometric roleplaying game where you create and develop your own character, interact with others and carry out missions using tactics of stealth, frontal assault or hacking (or some combination of the three).

If you've played the previous two games things will be familiar, bordering on the identical. The game is bigger than the original game and perhaps matches Dragonfall in size. The story, which is more personal and complex to the player, is actually stronger, as is the writing. The rich background of the pen-and-paper Shadowrun roleplaying game is called upon to provide depth and backstory to the setting, which works pretty well.

Combat is still turn-based, tactical and fun. The other key mechanic, decking or hacking, is much-improved. The original decking mechanic was a bit dull but it's now been replaced by a new version in which you have to stealthily move through the Matrix to find the information you are after. Once you reach your objective you have to use a key-memorisation routine to actually get the info. Failure at any point triggers a response from the automated security systems. It's an entertaining way of handling hacking, certainly a big improvement on the previous two titles, but it also feels a little more cumbersome and time-consuming, especially when most objectives can be achieved through combat or dialogue instead.

The characters are highly memorable this time time around, with your band of adventurers consisting of Duncan Wu, a tough fighter with a chip on his shoulder; a genius dwarf hacker named Is0bel and an orc mage named Gobbet. Optional additions to the party include Racter, a fanatical transhumanist rigger living in the cargo hold of a grounded boat (which serves as your party's HQ). It's the strongest cast assembled so far for a Shadowrun game, with the characters each having fully-fleshed-out backstories and motivations for doing what they do. 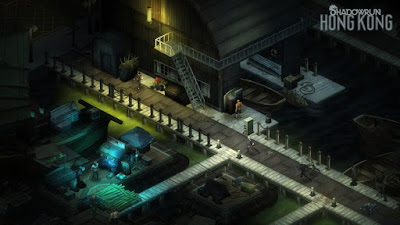 The main mission hub is a floating criminal town, which is great. Running across the huge map between your base and the subway does get a little old, however.

For the unimaginative, Hong Kong does pretty much the same stuff as Dragonfall and the original Dead Man's Switch, so if you really liked those games, get this one. It isn't perfect, however.


First up, the game felt a little easier that is predecessors on the equivalent difficulty level. It definitely required less constant updating of equipment or armour than the previous games. I only upgraded my gun to a new one once, and I updated my armour only twice in over 15 hours of gaming. Despite this, enemies remained relatively unchallenging throughout and even the end-of-game boss (who you cheekily have to kill three times to make sure they're actually dead) was a relative pushover. If you want more of a challenge, Hong Kong may not really provide it.

Secondly, the developers went back to Kickstarter to ask for more money to make a bigger and deeper game. They definitely made a bigger game, with some truly huge environments and more NPCs in each area. However, there isn't a lot more actual content. The game takes roughly the same amount of time to complete as Dragonfall, there aren't much more quests and the number of talkable-to NPCs and interactive elements in each location remains fairly low. A struggle of the series has been that it's fairly sparse in terms of things to actually do in the game apart from to follow the main story. There isn't a lot going on in terms of optional missions or little moments of side-flavour. What is there is excellent, well-written and atmospheric, but it's having to support quite a lot of time when you're doing nothing more than running across the huge hub area for the fiftieth time.

If Hong Kong (****) is pushing the limits of the game engine and design to breaking point, at least it remains mostly entertaining when doing so. It's a well-designed, well-written and fun game which is certainly well worth playing and doesn't outstay its welcome. However, I hope it is the last game in the series on this engine and future Shadowrun games will be a little more ambitious and rich in content. It struck me while playing Satellite Reign (which came out a week after Hong Kong) that if the designers of the two games could join forces and combine the gorgeous Satellite Reign engine with the combat and writing of the Shadowrun team, they could produce something really impressive. Hong Kong is available now on PC from Steam.
Posted by Adam Whitehead at 17:43