The power of the Storm King gathers over the lands of Osten Ard. Snow falls on the desert lands of the south, howing blizzards inundate the ruins of Naglimund and even the magic-wreathed Sithi strongholds are failing. Josua Lackhand is gathering an army as Sesu'a, the Stone of Farewell, but his brother Elias has sent a vast army to destroy him. Far to the south, Miriamele remains a captive at sea to an arrogant noble, and forces good and evil seek out the three magic swords which hold the key to the fate of the world: Memory, Sorrow and Thorn. 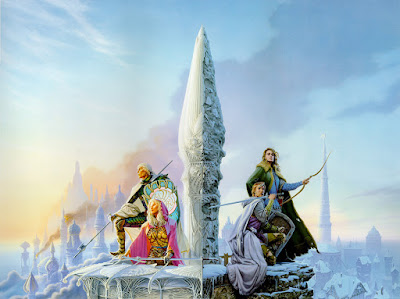 Originally published in 1993, To Green Angel Tower is the concluding volume of the Memory, Sorrow and Thorn trilogy and also the largest single fantasy novel ever written: at 520,000 words it outstrips The Lord of the Rings in its entirety by a cool 50,000 words. To this end the novel is frequently published in two volumes in paperback (entitled Siege and Storm in the UK, just "Part 1" and "Part 2" elsewhere).

Surprisingly, the novel is not as long-winded as that may sound. This is very much a novel of two halves, making the split more organic than might have otherwise been the case. In the first half the armies of the two brothers clash for control of the Stone of Farewell in an epic, vividly-described and lengthy battle. In the second, forces converge on Green Angel Tower, the tallest tower of the Hayholt, where the fate of Osten Ard will be decided. It's all pretty standard epic fantasy stuff, but Williams was one of the first post-Tolkien authors to pulls this off on such a large scale and so well.

As with the previous novels, The Dragonbone Chair and Stone of Farewell, the focus is on the characters more than the scenery. Although the history and landscape of Osten Ard are fleshed out well in this book (both better and more organically than in the previous two volumes of the series), we get more development (and more convincing development, critically) of characters like Josua, Miriamele and Simon. By now these have all developed into more complex, interesting protagonists.

Unfortunately, the same does not extend to the antagonists: Elias's descent into madness precludes us getting to know the real character, and Pyrates as a villain never really raises above the "evil wizard" archetype. The Norn Queen is more interesting but has only limited appearances, and Ineluki is mostly missing in action until the climactic showdown. Williams excels with the heroes and the more conflicted figures (like Cadrach, Guthwulf and Camaris) but the villains unfortunately lack greater depth. 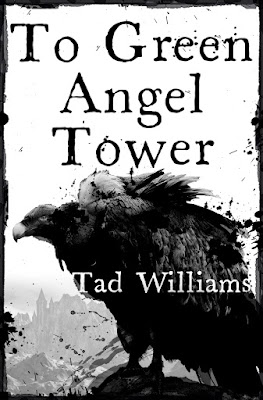 Memory, Sorrow and Thorn has attracted some acclaim for its stance as a revisionist fantasy, because the bad guys have a genuine grievance and their apparently insane plan to conquer/destroy the world actually makes sense (in a twisted, dark way). There's also some subtle commentary on Tolkien's more regressive use of racial archetypes (something Tolkien himself later regretted, and did note on even in Lord of the Rings itself), with representatives from all the races of Osten Ard playing a key role in the final battle.

For such a huge novel, the pace flags only in a few key places: Miriamele spends so much time on a boat you expect Gendry from Game of Thrones to show up and Guthwulf's blind adventures beneath the Hayholt drag on for an exceptional length of time. The old epic fantasy problem of having characters sit around and talk about the plot rather than getting on with it also rears its head from time to time.

But for the most part, To Green Angel Tower (****) works well both as a novel in its own right (despite it's hippo-stunning bulk) and as a conclusion to the greater series. The novel is available now in the UK and USA (Part 1, Part 2).

Tad Williams will return to Osten Ard for the first time in twenty-three years in late 2016 with the novel Heart of Regret, which will be set some months after To Green Angel Tower and also act as a prequel to the much bigger project, The Last King of Osten Ard. This is a new trilogy set to begin with The Witchwood Crown in early 2017.
Posted by Adam Whitehead at 17:09

The short novel bridging TO GREEN ANGEL TOWER and THE WITCHWOOD CROWN is now most likely called THE HEART OF WHAT WAS LOST (rather than HEART OF REGRET). It looks as though it may be published somewhat later then expected in January 2017. By all accounts, THE WITCHWOOD CROWN will follow quickly afterwards in March 2017.

This book has been retitled The Heart of What Was Lost, and it will be published in January 2017:

I tried reading this series about 5 or 6 years ago and couldn't make it through the first book. I may have to go back and give it another try.

Technically, Williams published prequel novella "The Burning Man" in Robert Silverberg´s LEGENDS in 1998, so it will only have been 19 years:-)

The Memory, Sorrow and Thorn trilogy is one of my favorite trilogies and I look forward to return to the world of Osten Ard.

Have just arrived at Pelipa's Bowl in The Stone of Farewell, so I'm still a fair way off getting on to this. I was looking to leave the hardback on my book shelf and pick up the ebook, only to find they've rather cheekily split that into two. I wonder if they'll do the same for the Audible release...

The new UK ebook of TGAT by Hodder has not been split. The older US one by DAW Books is.
The UK audiobooks of TGAT will be split to be published in February and May 2016.

Cheers Olaf. That's rather cheeky but not unexpected I suppose.

Okay, 3 months later I come across the news of Tad's return to Osten Ard and start reading some of the links on Tad's site, which led me here.

In the introduction, Tad calls this "The Book That Ate My Life" - well for me, it was the The Book That Ate My Vacation. I was on a long road trip when I dropped off a roll of film at a 1-hour processing joint in a mall, and to kill that hour, I roamed the mall and wandered into a bookstore, and found that To Green Angel Tower was finally out. I plunked the money down and bought it. After getting my pics, I took it back to my hotel room and started reading. And Reading. And Reading. Every spare moment for the rest of my solo road trip were consumed with me reading. I was not disappointed.

I've re-read it a few times over the years. The last time, well, I was incapacitated with a pinched nerve in my back and had managed to acquire the books-for-the-blind reading of the whole trilogy on audio and listened to the story all the way through. I never tire of this story. I would try and re-read it yet again in advance of the upcoming books, but I lent my copy of the first book to a co-worker, who did start reading it, then stalled out and she's still got it, months later. *sigh*

I am rereading this after 20 years since I first read it. I love it just as much if not more because I think I can appreciate the history and the different races much more. Back then I was more interested in reading something with a lot of action. I still enjoyed it but not as much as this time around.