Thirty years ago, Ash Williams and his friends found a book - the Necromonicon Ex Mortis - in a cabin in the woods. They recited some passages, the dead started rising and Ash's friends - and his hand - were lost in the bloody slaughter that followed. Ash emerged from the carnage victorious thanks to his shotgun and chainsaw. Unfortunately, when the evil book is once again opened, blood and death follow. 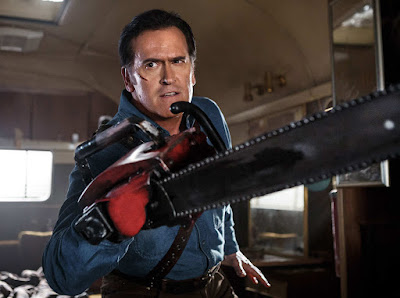 In 1981 Sam Raimi directed the horror movie The Evil Dead, starring Bruce Campbell as Ash. This was a very low-budget, horror-driven movie reliant on gore and shocks. The 1987 sequel, Evil Dead II, transformed Ash into more of a wisecracking buffoon and featured black comedy alongside the horror. The third film in the franchise, Army of Darkness (1992), dialled back on the horror in favour of Ray Harryhausen-inspired battles and memorable one-liners. Rumours of a sequel abounded for decades before Raimi produced a reboot of the original Evil Dead in 2013, which seemed to put a nail in that coffin.

It's therefore a bit of a surprise to see the original Evil Dead franchise resurrected for television. Bruce Campbell reprises his role as Ash, now thirty years older but still no wiser, who once again unleashes the Evil Dead into the world and has to set out to defeat it. This time he has more time (these ten half-hour episodes more than double the total screen time for the character and franchise) and actual help, with younger deadite-fighters Pablo (Ray Santiago) and Kelly (Dana DeLorenzo) joining the battle. Troubled cop Amanda Fisher (Jill Marie Jones) also soon joins the fight, as does the enigmatic Ruby (Lucy Lawless).

The expanded cast helps the thin premise sustain ten episodes. I must admit I was initially startled to hear that the episodes were only thirty minutes long, fearing this would result in rushed storylines. As it turns out, this is exactly what happens but, unexpectedly, this turns out to be a good thing. Sam Raimi and the directors aping his style in this series (and they do a pretty good job) work best when using frenetic wipes, jarring jump-cuts and ramping up the action to 11, and the limited airtime helps them do this better. Several episodes are in fact based around single action set-pieces and in this sense the limited viewing time works.

What makes the series really sing, however, is the clever way it opens out by aping Army of Darkness's style of comedy and gradually shifting back to the more interesting mix of laughs and utter, shocking horror pioneered by Evil Dead II by the final episode. In fact, the season as a whole is a lot smarter than it looks. Ash's sexist, blustering heroism comes from a different era and his younger friends don't let him off the hook for his behaviour whilst also, begrudgingly, admiring other aspects of it (Ash's tendency to run into insane danger to save his friends is emphasised here). The fact that only one of the main cast is a middle-aged white dude is also not commented on at all, making it odder when you suddenly realise that you hadn't noticed it. The world has grown up around The Evil Dead and this TV show acknowledges it silently before getting on with the undead-slaughtering.

Of course, the show's nods towards such things are secondary to the shocks, the brilliant stunts and the inventive horror. Sam Raimi and his team have lost none of their glee for decapitations, impalements, dismemberment and blood. Gallons and gallons of it. The main reason the Evil Dead works so well on TV is that there is no way a modern movie could get away with the sheer amount of mayhem on screen, not to mention that the budgetary restrictions force the producers back to the ways of practical effects and not relying on CGI for everything. Sam Raimi is such a huge director he could now get a massive budget for a new movie project of his, but here he seems to relish having to think his way around budgetary limitations.

On the negative side of things, the constant murder and slaughter gets a little wearying in extended doses. This show works better when viewed as half-hour chunks a few hours or days apart rather than in massive binge sessions. The ending of the finale also feels a little off, a little bit too obviously designed to set up the second (already-approved) season. Some may also feel frustrated that Ash makes the same mistakes a little too readily, which is true but it's also very true to the character. There's also Ash's failure to mention the events of Army of Darkness, which feels a bit odd until you learn this is down to legal issues.

The first season of Ash vs. Evil Dead (****) is inventive, funny, well-paced and quite startlingly bloody whilst also working on a cleverer level than it first lets on. But it is, overall, quite ludicrously entertaining and delivered by a group of highly talented performers led by Bruce Campbell, whose charismatic fire has not been dimmed one whit by the passing years.
Posted by Adam Whitehead at 21:43

Thanks for the info in this post! I just watched the tenth episode, and I'm glad I won't be confused when the next episode doesn't come out next week!

"There's also Ash's failure to mention the events of Army of Darkness, which feels a bit odd until you learn this is down to legal issues."

I wish I had known this going in... It took me a few episodes to pin down how much of the backstory had made it into the series.

I would qualify the statement about it being well-paced by having to be be aware of the structural demands of the format and its inventiveness by having to be aware of the kind of content. Episodes are relatively short and therefore lengths don't count as much and are a normal part of their structure and its inventiveness is fulfilled by making each episode worthwhile.
It's a series to be happy about but that's also hard to hype (without any dourness in this statement).