DOCTOR WHO showrunner quits, gets replaced by worst possible choice

Doctor Who showrunner Steven Moffat has quit. The next season of the show, the tenth since its return in 2005, will be his last. The next season will film this year and be trailed by a Christmas special, with the season itself expected to debut very early in 2017. 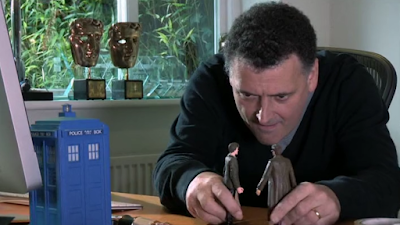 Moffat will be replaced by Chis Chibnall, who will take over for production of the eleventh season in 2018. This news has been less well-received, although the BBC has de facto confirmed that the show will be continuing for at least two further seasons and likely more. In fact, it sounds like the move to Spring 2017 has come from a combined urge to miss major sporting events in 2016, give Moffat more time to prepare scripts for the next season, give Peter Capaldi a longer break between seasons (Capaldi has noted that he loves playing the Doctor, but had indicated that he might only stay for three seasons due to time requirements and his desire to play other roles) and also to see if a move to the spring might help the first-run viewing figures. Although combined viewing figures (taking into account repeats and time-shifting) have showed little fluctuation from the show's ratings heyday under Russell T. Davies, the first-run viewing figures have almost halved since it moved later in the year. However, some fans and commentators have blamed the lack of a regular, predictable timeslot (the show's airing time changes almost weekly) for this, as well as a more global move towards streaming and viewing after the fact. Moffat also oversaw the show's global viewing figures passing 70 million, an absolutely enormous number. With the overwhelming majority of that number watching from outside the UK, through deals made with BBC Enterprises, that actually makes the BBC a significant amount of money and makes the show's cancellation doubtful.

The decision to replace Moffat with Chibnall is raising the ire of some fans, who were confidently expecting Toby Whithouse or Mark Gatiss to take over. Whithouse has an excellent showrunning pedigree with Almost Human, No Angels and The Game, has writing scripts for Doctor Who and was generally regarded as the favourite to take over. Gatiss has exceptional experience working on Who, having regularly contributed scripts since its return in 2005 as well as writing novels and actually playing the Doctor in spoof charity sketches. Some of his scripts have been less accomplished than others, but his drama An Adventure in Space and Time, about the creation of the show, was widely regarded as the highlight of the 50th Anniversary celebrations two years ago.

Chibnall, on the other hand, has written scripts for the show ranging from terrible to barely adequate and lives in infamy as the writer of Cyberwoman, a script for Torchwood thay may be the worst thing ever made in relation to the Who franchise (certainly in the top five). He also worked on the terrible Camelot. Chibnall had a reputation rehabilitation by producing and writing the brilliant first season of murder mystery series Broadchurch (starring former Who star David Tennant), but the second season was substantially weaker and patchier, with occasional flashes of brilliance.

If the Chibnall who gave us Broadchurch Season 1 shows up, then Doctor Who could be in reasonable hands going forwards. If not, things may start to get a bit rougher going forwards.

Moffat is expected to continue in his role as showrunner, writer and producer on Sherlock alongside Mark Gatiss. It is possible that this move may even allow more episodes than normal to be produced: whilst Benedict Cumberbatch and Martin Freeman's rise to international superstars has limited the time available to work on the series, Moffat's own commitments to Who (taking up to nine months of every year) have also prevented more episodes from being made. With additional time now available, we may hopefully see an upturn in production.
Posted by Adam Whitehead at 18:32

Email ThisBlogThis!Share to TwitterShare to FacebookShare to Pinterest
Labels: doctor who, news, steven moffat, this will probably suck but you never know, wtf

I agree with your concerns! Perfectly stated. I was hoping Toby Whithouse would be the new showrunner. But I do hope the good Chibnall shows up. He did write The Great Train Robbery which was superb.

Steven Moffat: very big talent needed to replace the void he is leaving on Doctor Who!

My main issue with putting Toby Whithouse in charge is that, well, his style of story is outdated. Look at A Town Called Mercy - can we honestly say that its angsting Doctor really fits in with the rest of the season? And then there was Under the Lake/Before the Flood, an utterly by-the-numbers affair with a poorly-sketched supporting cast, a crass fridging of one character, an out-of-nowhere romance between Cass and Interpreter, and from that fridging another dull and boring "Doctor being cruel" scene.

And I don't think The Game really argues his case much at all. The music was fantastic, but the plot is full of holes. Operation Glass has more red herrings than a genetic manipulation laboratory with a sense of irony. Tom Hughes, the lead actor, alternated between perfect for the role, looking like he was trying, and in a couple spots just being utterly thuddingly dull. Daddy's teleportation act in the last episode - ordinarily not a problem, but when piled onto everything else. Yulia's apparent total lack of trauma from her year being shunted around prison - and she was fridged, it was subverted, yes, but that's about it. Odin's actor was really quite mediocre and almost entirely lacking in any sort of charisma.

Just about every character is a cliche of some sort. Bobby, the closeted high-society type, Wendy, the secretary whom becomes an agent in her own right, Daddy, the charming leader, Jim, the police offer thrust into a world beyond his imagination. And there's the other story flaws - it's never explained why Sarah betrays them, the tale of Bobby and his relations with his mother gets a couple episodes, one with aforementioned mother being rude to someone, but we never see anything beyond a brief glimpse of Bobby passing by the door to his mother's apartment.

I mean, it could've been brilliant. The characters are cliches, but they're magnificently acted. They have genuine character. Had there been a second series it's possible that they would've continued to develop. There's energy about whom may or may not have secret plans. There's plenty of hints at genuine excellence, but in the end the show never quite reaches beyond being derivative. The show can definitely be enjoyed, but it's a let-down, only a step or two above mediocre.

And there's the outrageous transphobia from his Torchwood script, Greeks Bearing Gifts. He's talented, it's true, but his storytelling is outdated.

Mark Gatiss is better than Whithouse, but that's not to say he's without flaws. He's nostalgic to the point of ludicrousy. It's very unique and idiosyncratic nostalgia, but it's frequently nostalgia with blindness to the flaws of what he's nostalgic about. Sleep No More was magnificent, but a lot of this down to the direction. It's got several plot holes - your mileage may vary, personally, I forgive them for the brilliance around them - and when he has good ideas he doesn't push them particularly far.

Chibnall, of course, comes between them. His episodes are generally rather by-the-numbers, but they're fun and enjoyable. And, further, he's shown himself to be talented with Broadchurch which I've heard many good things about. I enjoyed most of his episodes (the Silurian two-parter excepted) and I am cautiously looking forward to it.

Steven Moffatt was overrated in my opinion.

This last season was his worst. First off we now know that the Doctor can choose his appearance during regeneration unlike every other time lord. We know that the Doctor fled Galifrey because of the Hyrbid which doesn't exist. The Hybrid story had no resolution or any relevance with the final story, which was all about cheapening Clara's death.

Then there was Galifrey which was frozen in a moment of time and needed the Doctor's help, turning out to not need the Doctors help at all as they had no trouble contacting Mayor Me. How did they end up at the end of the universe? Why did he have two episodes dedicated to saving Galifrey when it was going to return with no explanation anyway?

Then there was the Doctor not knowing where Galifray was and yet putting it in his confession dial.

Let's not forget the whole rubbish about Trenzalor. That was where the Doctor died and then all of a sudden he isn't dead. I get that Clara got the Time Lords to change history, but then why was his grave still there?

And anyone remember Madame Kovarian from season 6? Nope? her plot was just dropped so she's probably just having a nice drink somewhere obviously unaware her plan failed.

I'm willing to give the new guy the benefit of the doubt. As long as he doesn't forget what he's written like Moffatt I'll be happy.

Also. I'll end this with: Moffatt was as nowhere near as bad as RTD.

It's a little more complicated than saying someone is a good or bad "show runner". The dynamic has to be looked at in the context of how the boss writes/develops stories. There are two basic ways of writing, character driven and plot driven. If you wan't a brilliant visual representation of this, watch Adaptation, where Nic Cage plays twins, one of whom is a brooding character writer, the other a carefree bloke who goes on a course and writes a blockbuster plot driven action movie. The film is written and directed so it switches between the two styles- very clever.

Do you Brits think Martin Freeman is an "International Superstar"? That's adorable.

Maybe that was pushing it a little. But he was in The Hobbit movies, he's in Captain America: Civil War, he was exceptional in Fargo and Sherlock is a pretty big international success story. He's certainly not massively behind Cumberbatch in stature.