Hell's Kitchen, New York. A private investigator named Jessica Jones makes her living from exposing cheating spouses, whilst trying to play down her former life as a superhero (due to being endowed with super strength). This becomes impossible when her former nemesis, Kilgrave, returns to New York. Kilgrave has the ability to control minds, making him a near-unbeatable foe. To defeat Kilgrave, Jones will need to call upon allies, her powers and confront her own motivations. 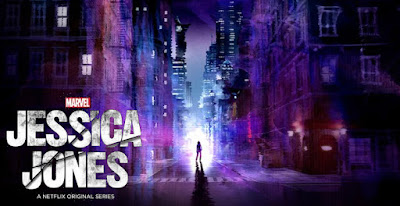 Jessica Jones is the second in a series of collaborations between Marvel and Netflix, following on from Daredevil and due to be followed by Luke Cage, Iron Fist and culminating in The Defenders, which will unite the four heroes into their own team. For that reason it might stand to reason that viewers should be expecting Jessica Jones to be an action pulp thriller, stylish but ultimately fitting into the "conflicted hero" mould pioneered by Daredevil. However, the show has absolutely no problem with going in a completely different direction.

Jessica Jones opens as a standard procedural, with Jones (Krysten Ritter) investigating yet another case of infidelity and running into Luke Cage (Mike Colter), a barman who also has superpowers. Jones and Cage's initially firery romance becomes problematic when Jones discovers that she was inadvertently responsible for a tragedy in Cage's life, one forced upon her by Kilgrave (David Tennant), a monstrous and egotistical man with the power to control minds. When Kilgrave returns to New York, intent on winning Jessica's heart and soul, Jessica at first wants to flee but then decides to stay and face her abuser. Given the utter formidable nature of his powers this proves to be a herculean task which forces the normally independent Jessica to call upon various friends and allies for help.

The result is a show which is focused not on superpowers and heroics (although both are present, they are treated matter-of-factly compared to other Marvel films and TV shows) but on psychology, survivor's guilt, post-traumatic stress disorder and revenge. There are moments of biting comedy, pathos, romance and tragedy, with a few major stunt set pieces and some real heroics put into play, but ultimately this is a much more adult, nuanced and subtle TV series about people with powers than we have seen before.

The series works well because it is not afraid to make Jones do things that are unlikable. She is sarcastic, rude and often apparently ungrateful, but is forced by events to rely on her friends for help and assistance in bringing Kilgrave down. As with Daredevil's first season, this results in what is effectively a 13-hour origin story as Jones the hero gradually emerges from the shell of Jones the survivor. Ritter plays this complex character well, by being able to retain viewer sympathy and empathy even when makes selfish or silly decisions.

Ranged against her is Tennant's Kilgrave, described (not without justification) as a walking example of white male privilege. As with Daredevil, the writers here chose to develop Kilgrave as the antagonist almost as well as Jones, peeling back the layers of his character to reveal someone shaped by a difficult childhood into an uncaring monster. Cleverly, the writers reveal that he is an incomplete character, desperately seeking a destiny and identity. These are among the things he hopes Jones can give him, but these also expose him as an insecure and needy character. It's also fascinating to encounter a villain who is ruthless, amoral and intelligent, but also remarkably unambitious. When you can walk into any apartment or mansion in the world and take it over for as long as you like, plans like conquering or destroying the world become rather moot. The lack of a grandiose plan for the villain is honestly rather refreshing, and makes the conflict feel more personal and more real. Tennant's intense performance is the perfect mix of Machiavellian planner, childlike anger and creepy stalker. The only negative here is one that's not really Tennant's fault: the producer's decided to have Tennant adopt an English accent in the role rather than an American one, or his native Scottish accent. The only other major role Tennant has played with an English accent is Doctor Who, which leads to moments of tonal disjointedness for viewers who are also fans of the latter. Once you adjust, that's not really a problem. 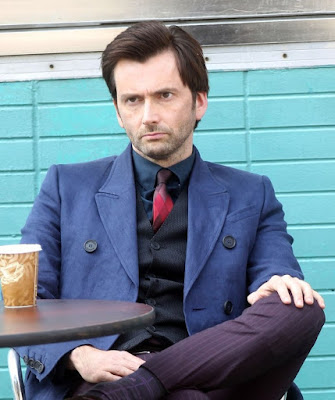 The battle between the abuser and his former victim forms the main through-line of the series, but other storylines come into play. Malcolm Ducasse (Eka Darville) starts off as Jessica's "junkie neighbour" cliche but rapidly evolves into the show's beating heart and soul. Luke Cage belies his appearance as a hunky motorcycle-driver to show someone suffering real emotional pain. Colter's acting is excellent, and bodes well his stand-alone show later this year. Carrie-Ann Moss also turns in a strong role as lawyer Jeri Hogarth (the Marvel Cinematic Universe's first major lesbian character), whose disintegrating marriage unexpectedly collides with Jessica's investigation into Kilgrave. Rachael Taylor also turns in an intriguing performance as Patricia Walker, a former child star now living in a fortified apartment out of fear for her safety.

The thirteen hour running time gives the writers time to experiment with the story, follow up on intriguing secondary characters and flesh out storylines and characterisation to the maximum. There is even time for experimental episodes, such as Jessica being trapped for an episode in her childhood home and Kilgrave in turn being interrogated in a cell designed especially for him and his powers. However, as with Daredevil, there is the feeling that thirteen hours is just a bit too much. With at least a couple of episodes shaved off, the result would have been a tighter focus which would have eliminated a few flabby storylines (the adventures of ex-soldier-turned-cop Will Simpson are completely uninteresting, not helped by Will Traval's indifferent performance). In addition, given the status of Kilgrave and Jones as mortal enemies and the tremendous danger of Kilgrave's powers, the way Jones continuously exposes herself to him seems recklessly dangerous. This is eventually - sort of - explained, but there is the feeling in a few mid-season episodes that the reason Kilgrave survives is because they need to pad out the running time, not because it makes much sense in the story. There is also a late-season crossover with Daredevil which is doubly jarring, because the tonal difference between the two shows is so huge they they don't feel like they take part in the same universe and also because the character in question becomes highly prominent in the episode for absolutely no reason unless you've seen Daredevil as well.

These are fairly minor complaints, however. At its best, Jessica Jones (****½) is cleverly-written and boldly inventive, with surprising-but-justified twists for many of its well-played characters. It's a show that works both as a stand-up thriller and a more nuanced study of grief and abuse. The first season is available now on Netflix.
Posted by Adam Whitehead at 20:36

I thoroughly enjoyed Tennant's Killgrave, English accent and all. Instead of clashing with his previous role as the Tenth Doctor, it gave the character an extra creepy feel, as if the Doctor had become the Master, even with very similar mind control powers. I wonder if Killgrave was in any way inspired by Roger Delgado's Master? Either way, Tennant's performance made me think back to the Doctor's various genocides, or his initial indifference towards his role in the destruction of the town in 'The Family of Blood'. It enhanced the show for me, at least.

"...there is the feeling in a few mid-season episodes that the reason Kilgrave survives is because they need to pad out the running time, not because it makes much sense in the story."

I actually liked that aspect of it, because I like it when villain's are played intelligently, with the consequences of their powers played to the full. Plus, every time you thought Killgrave couldn't get more evil...

I thought the show was great, but I think the perfect level of foreknowledge would be just knowledge of the Marvel Cinematic Universe and not the comics, otherwise you might read too much into some things. It also felt odd once or twice that the characters talked about some of the other characters from the movies but couldn't mention them by name...

I'm sure you know but Will Simpson is supposed to be Nuke from the comics, madman supersoldier with an american flag tatooed to his face. I think season 2 will likely feature more of him in villain role by the looks of the end

Much like in Daredevil, I thought the villain was more interesting than the hero. Tennant played the character very well, though I have to say the showrunners knows their characters. I especially liked the fact they never actually called Kilgrave "The Purple Man" but had him in a purple suit a bunch of times.
I also agree with Bronk that some knowledge of Marvel is needed to fully enjoy the show. If you don't know who Luke Cage is in the comics, then his appearance in JJ would not be that much of a big deal.

I was a big fan until right around episode 8. At that point it seemed like all the characters suddenly started acting like idiots and the writers lost the handle on how they were supposed to get to the ending. Otherwise, excellent season. Probably won't be back for season 2, as I highly doubt they will get a better villain and he's what kept me watching through the rotten episodes toward the end.