The Starz TV adaptation of American Gods has found its leading man. British actor Ricky Whittle will play the role of Shadow in Neil Gaiman's story about ancient gods existing in the modern United States. 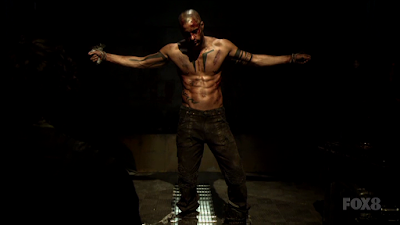 Whittle rose to prominence on British television, most notably a lengthy stint on Hollyoaks and a turn on reality TV show Strictly Come Dancing as well as roles on Dream Team and Holby City. He then moved to Hollywood and for the past three seasons has played the recurring role of Lincoln on the excellent CW adventure series The 100, as well as appearing on Single Ladies, Housewives and NCIS. He has appeared in two films, Losing Sam and Austenland.

American Gods is based on the Neil Gaiman novel of the same name, although it will also incorporate original storylines and elements from Gaiman's other planned stories in the same universe. The Starz series is expected to shoot this year for a possible 2017 debut.
Posted by Adam Whitehead at 17:56