StarCraft II: Legacy of the Void

Years ago, the Protoss homeworld of Aiur was lost to the Zerg. Many of the Protoss survived by escaping into space and seeking refuge on Shakuras, refuge world of the Dark Templar, before fighting in the Brood War. However, the mighty warrior Artanis dreams of retaking his home and to this end has gathered the Golden Armada, the greatest fleet in Protoss history, to launch the invasion of Aiur. But the invasion is a trap baited by the Fallen One, Amon of the Xel'Naga, and only with the wisdom and assistance of Zeratul can Artanis and his forces escape, regroup and strike back. 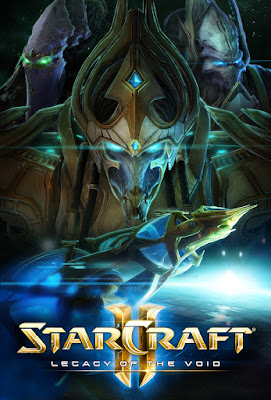 Legacy of the Void is the third and final part of the StarCraft II saga, begun in Wings of Liberty (2010) and continued in Heart of the Swarm (2013). It's taken a very, very long time to get here. The original StarCraft was released in 1998, its expansion Brood War a year later and StarCraft II was formally announced in the spring of 2007. The fact it's taken almost nine years since that announcement to get the game completely out is faintly ridiculous, and has certainly sapped some of the excitement and momentum from the franchise.

But the game is out now and has several roles to fill: it needs to be a satisfying single-player game with a strong storyline that ties up plot elements that begun eighteen years ago in the original StarCraft. It needs to have exciting multiplayer that builds on the successful design established in the previous two games. And it needs to see out the franchise - as any StarCraft III is likely many, many years away - in style.

Its success in these fields is highly debatable. On the story front, Legacy of the Void is easily the weakest link in the StarCraft II saga. Its characters are pompous and unrelatable, the dialogue is overwritten, cliched and awful and none of the characters with the sole exception of Alarak (helped by superb voice acting from John de Lancie) have much of a discernible personality. It doesn't help that the game is very unfocused. The previous titles benefited from having a strong, personal through-line that helped anchor the massive battles and carnage around them: Wings of Liberty was focused on Jim Raynor's mission to redeem Kerrigan; Heart of the Swam focused on Kerrigan seeking out vengeance on Arcturus Mengsk. Legacy of the Void doesn't have that. Instead, the story is that the Protoss have to defeat Amon and don't know how to do that, so flit around from crisis to crisis until, inevitably, a plot twist reveals the Fallen One's hidden weakness, at which point you have to try to kill him in the face. It doesn't help that Amon is cut from the exact same cloth as Sargeras and the Burning Legion of WarCraft lore, an unknowable cosmic mega-foe who wants to kill everyone because why not? As an antagonist, he lacks the bite or personal edge that Arcturus Mengsk or Kerrigan herself had in previous games. It also doesn't help that the game is focused on the Protoss, but then in the three-part finale to the game we suddenly get a major return from characters like Kerrigan and Raynor, during which the Protoss are shunted off to the side and don't get much resolution. It's an awkward structural issue that Blizzard don't really know how to handle, although it does allow them to bookend the StarCraft II story by ending where it began. 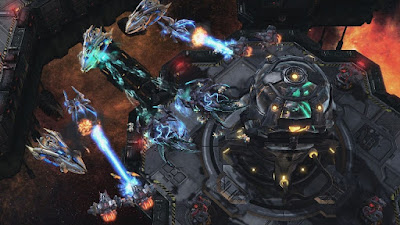 So much for the story, what about the individual missions? Well, the gameplay is as strong as ever. The Protoss may be my favourite StarCraft race and they also seem to have been least modified from the original games, so in terms of actually playing the game I felt more at home with them than I had with the other two species. However, they may also be the most overpowered race in the game (this will be fiercely debated by other StarCraft players, but I stand by it) with their formerly formidable Archon/Carrier combo now being joined by units such as Void Rays, Stalkers and Immortals to make them almost completely unstoppable once you've moved a modest distance down the tech tree. The Protoss are immense fun to play and their missions are very well-designed with some genuinely thought-provoking strategic challenges. However, RTS veterans won't find much to slow them down here. With the exception of maybe the final epilogue mission and the final main campaign mission, nothing here is remotely on the order of difficulty of the original StarCraft missions, let alone the nightmare of Brood War's last few missions. But certainly in the moment the game is fun to play, either in single-player or the typically frenetic multiplayer modes.

The gameplay is also limited by the curious decision to control your access to units. So you can build Void Rays or Arbiters, but not both, which feels arbitrary. You also can't field-test the different variants on the battlefield like you could with Heart of the Swarm, which feels like a regressive step.

As an overall experience, Legacy of the Void (***½) certainly has impressive production values. It's polished to a fine sheen, there are monumental numbers of in-engine cut scenes (although only a tiny handful of the pre-rendered, beyond-movie-quality CG cinematics that Blizzard are best known for) and the game clocks in at around 15 hours in length, which isn't bad for a stand-alone expansion. The gameplay is solid, a very nice iteration over the standard StarCraft experience, but the storyline, writing and characterisation are all seriously subpar. You have fun playing the missions, but the game provides insufficient context or motivation to make you care a huge amount. The result is a game that is intermittently brilliant, rather less intermittently tedious and overall vaguely disappointing compared to what came before it. It's certainly a worthwhile purchase for fans of the franchise, but newcomers will be lost and it's a game that has fallen far short of its potential. The game is available now on PC (UK, USA).
Posted by Adam Whitehead at 17:12

Email ThisBlogThis!Share to TwitterShare to FacebookShare to Pinterest
Labels: blizzard, legacy of the void, starcraft 2

You forgot the Co-op mode, which is pretty fun :)