HBO has confirmed that a film version of their critically-acclaimed Western series, Deadwood, is currently in development. 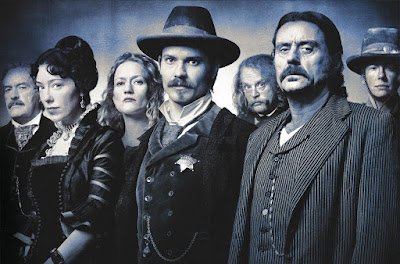 Fans have speculated about a continuation of the series since it was cancelled in 2006 with several storylines and character arcs left unresolved. The series aired for three seasons and 36 episodes. Beginning in 1876, it was set in the goldrush town of Deadwood, South Dakota and revolved around the machinations of the local barkeep, entrepreneur, brothel-owner and gangster Al Swearengen (a career-redefining performance by British actor Ian McShane). Of particularly note was Swearengen's relationship with the town's sheriff, Seth Bullock (Timothy Olyphant), with them sometimes acting as allies against mutual threats to the town's interests and sometimes facing off against one another.

The series was mostly written by the highly idiosyncratic writer David Milch, who gave the series an increasingly complex, almost Shakespearean feel as it continued. Characters were occasionally prone to long soliloquies and an air of tragedy hung over the entire series. It was also notable for mixing fictional characters with real historical ones (such as Swearengen and Bullock) to dramatic effect.

The series was cancelled after Milch expressed an interest in developing another project for HBO, John From Cincinatti, which was not well-received and was cancelled after one season. Milch's insistence on doing this before the planned fourth and final season of Deadwood created problems in hanging onto Deadwood's vast and sprawling cast, many of whom had found other work and commitments in the meantime. HBO was unable to reassemble the cast for a final season. Plans for a shortened mini-series or a film at the time also failed to coalesce due to problems around availability. These issues led HBO to changing the way they operate with later series, refusing to let shows die on the whim of their showrunners (and likely preventing shows like Game of Thrones from taking lengthy breaks).

Many of Deadwood's cast went on to great success in other projects, such as Timothy Olyphant's six-season run as the lead on Justified and Anna Gunn (who played Seth's wife) on Breaking Bad. Ian McShane, a long-established figure on British television, finally broke through into the American market with Deadwood and has since played the lead on shows such as Kings and Pillars of the Earth. He will have an undisclosed, recurring role on Game of Thrones in its sixth season as well.

Although HBO have confirmed that the film is in development, it hasn't quite been formally greenlit. Milch is currently wrapping up another project as well as working on an early draft of the Deadwood movie script. HBO will not formally greenlight the project until the script is done, a director is available and they are sure they can bring back the required castmembers.
Posted by Adam Whitehead at 18:49

Everything I'd ever read about Deadwood's abrupt ending suggests a very different story: that the execs, who were under new management, felt compelled to take bold action and thus cancelled the expensive show in order to show an immediate boost in profitability (This apparently also led to Rome and Carnivale being cut short as well). I'd never heard that Milch put Deadwood on hold on purpose for John From Cincinnati. What are your sources on this, Adam?

Also, the practicality thing I'd never heard. The only two stories in the wind were about the clash with JFC and an alternate one that HBO was short on money because of the expense of ROME. This is also allegedly why THE WIRE and THE SOPRANOS also had to take extended breaks around the same period (2005-07). The latter theory seems to have fallen by the wayside in the years since.

The change in management (Chris Albrecht's controversial departure) is apparently why the planned movie follow up never happened. Milch himself rejected the 6-episode mini-series at the time.

This is very good news. Just a quick correction: you know Justified had six seasons, right?