NASA today announced a new mission to Europa, one of Jupiter's moons. The mission will consist of a spacecraft that will enter a dedicated orbit around Europa and survey the moon from orbit, as well as a probe that will land on the surface and conduct experiments. The mission will launch in 2022, likely to arrive at Europa a couple of years later at the most. 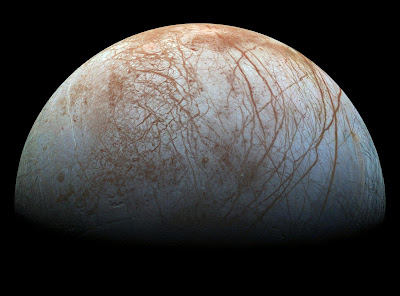 Europa is remarkable as it consists of a solid shell of ice beneath which lies an ocean which is made up of more water than there is on the entire Earth. Scientists have long speculated that Europa's subsurface ocean may be one of the most promising places in the Solar system beyond Earth for life to develop. It has also been a long-favourite location for science fiction authors to explore, most famously Arthur C. Clarke in 2010 and 2061, the two sequels to 2001: A Space Odyssey. It also played a major role in the 2013 film Europa Report, and in novels such as Galileo's Dream and The Quiet War.

The new Europa mission was directed by the House Appropriations subcommittee in the US Congress. Remarkably, NASA themselves did not want to include a lander, believing an orbiter was more important so it could select a future landing site for a lander. However, the chair of the subcomittee, Texas Congressman John Culberson, directed NASA to include a lander as part of an enhanced budget for their operations. With just six years before launch (not much time at all for such an advanced mission concept), NASA is going to have to scramble to get a lander designed and built.

Europa possesses a harsh environment which will make the long-term survival of a lander unlikely. Jupiter is ringed by massive radiation belts and Europa will be freezing cold, especially at night. It is likely that any such lander will only last a fortnight or so at most before failing.

This is a big step forwards for the exploration of the Solar system, especially impressive as it will happen on a fairly rapid timescale.
Posted by Adam Whitehead at 23:34

Outstanding, I'm a bit worried about the time crunch but it's time to push...this is all directly tied to the survival of our species. Also to possibly move towards finding life, I can't wait!