Richard Morgan's classic cyberpunk novel Altered Carbon has been greenlit by Netflix as a ten-episode television series. This isn't an option or an "in-development" deal, but an actual guarantee to make the series. 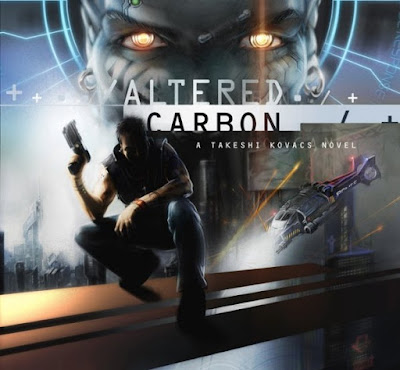 Laeta Kalogridis, a producer and writer who has worked on Shutter Island, Avatar and Terminator: Genisys, is bringing the project to the screen. She has been trying to get the series made for several years and is a huge fan of the novel and the overall book series.

Altered Carbon is the first of six (so far) novels set in a coherent future universe. The first three - Altered Carbon (2002), Broken Angels (2003) and Woken Furies (2005), sometimes called The Takeshi Kovacs Trilogy - are set in the 25th Century and revolve around the titular soldier and mercenary, who hops from body to body on different worlds to complete missions and jobs for shadowy forces. Kovacs is noted for his intelligence and his ability to both hold a grudge and coldly execute it if he feels wronged. He also has something of a conscience, which gets in the way of his work.

The three later books in the setting form the Land Fit For Heroes Trilogy - The Steel Remains (2008), The Cold Commands (2011) and The Dark Defiles (2014) - which is set many thousands of years in the future and is actually a post-singularity, post-transcendence (kind of), Dying Earth-style epic fantasy. It is unknown if the rights to the fantasy trilogy are part of this deal, but probably not, as the links between the two series are fairly mild.

This is not the only Morgan book under development. His classic 2007 SF novel Black Man (known as Thirteen in the United States) is also under option as a feature film.

The airdate for Altered Carbon (assuming that's the name for the entire TV show) is unknown, but the earliest date is likely to be in the back half of 2017.
Posted by Adam Whitehead at 19:17

Love this book and I'm very excited that it's coming to TV. Can't wait to hear who they cast as Kovacs.

I loved these books and will interested to see how they handle the Kovacs character's multiple "sleeves" across the books without making it too confusing.

Excellent news. When it got optioned as a film I did worry about what would become of the complexity of the story. They could have all too easily cut it down into a standard Hollywood sci-fi action b-movie. A ten part series though? Much more room to let the story breath and establish Kovacs as the awesome character he is. I really hope they don't neuter either the character or the story. Do it justice or don't do it at all.

Adam, I noticed that you posted a bit of fantasy casting on Twitter. Save Idris Elba for Carl Marsalis since he's actually based on him at bit. :D

I've always thought of Harlan's World version of Kovacs as being played by Tony Leung Chiu-wai and Russell Crowe from about 10 years ago as the Elias Ryker sleeve version of him.

This will be a hard hard series to adapt. Interested to see how they will do it but I can see it going very wrong.