The primary writer of the iconic Half-Life series of video games, Marc Laidlaw, has confirmed that he has left Valve. 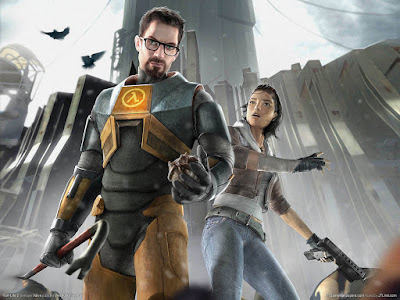 Laidlaw, an experienced novelist  joined Valve in 1997, at roughly the same time that Valve decided to completely revamp their then in-development action game, Half-Life. Laidlaw helped stream back the game's original, much more overt action/horror angle, instead developing a pared-back form of worldbuilding and abandoning lengthy exposition in favour of environmental clues and letting the player piece together the plot from clues left lurking around the levels. This more naturalistic form of story-telling helped Half-Life become one of the biggest-selling first-person shooters of all time when it was released to blanket critical acclaim in 1998.

Laidlaw returned as the sole writer on Half-Life 2, released to equal acclaim and even greater sales in 2004. The game again favoured environmental storytelling over exposition or infodumping. This form of storytelling - largely ignored by the cut scene-heavy, narratively clunky first-person shooters that have followed - was highly praised for its immersion but also criticised by some who felt it left the game's backdrop and setting underdeveloped and even obtuse. Laidlaw also co-wrote the two expansions to the game, Episode One (2006) and Episode Two (2007). More recently he has worked on the background fiction for Valve's online battle game Dota 2 (2013).

Laidlaw's best-known novels are Neon Lotus (1988), nominated for the Philip K. Dick Award, and The 37th Mandala (1996), which was nominated for the World Fantasy Award and won the International Horror Guild Award. Laidlaw has indicated that he will likely now return to writing novels and short stories.

Laidlaw's departure from Valve has led to renewed speculation over the fate of the long-missing continuation of the Half-Life series. Valve were developing Half-Life 2: Episode Three after Episode Two ended on a monumental cliffhanger over eight years ago, but the title failed to appear. Valve later seemed to indicate that the episode had been abandoned in favour of a full Half-Life 3, but official comments were hard to come by. Fans of the franchise have grown increasingly frustrated as Valve have released several other games in the meantime whilst refusing to comment on the status of Half-Life 3. More recently Valve have chosen to focus on online games and on their insanely popular gaming marketplace software, Steam, which now boasts over 125 million users.

Laidlaw's departure is not necessarily bad news for the Half-Life franchise, as Valve still employs other talented writers who have worked on games such as Left 4 Dead and, especially, the critically-acclaimed Portal 2 (2011). However, speculation that Laidlaw may have decided to leave due to Valve's move away from narrative games, and potentially from any interest in bringing Half-Life 3 to market, will no doubt be rife.
Posted by Adam Whitehead at 19:09