R. Scott Bakker has posted the map that will accompany The Great Ordeal, the forthcoming third and penultimate volume of his Aspect-Emperor trilogy. Unfortunately, it comes with the caveat that the third book in the series may be facing a delay. 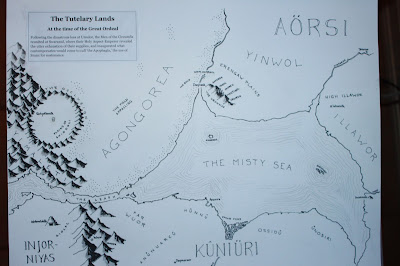 As is well-known, Bakker completed the then-final volume in the Aspect Emperor series well over a year ago, but there were substantial delays at his publisher Overlook. It took a concerted letter and email campaign by fans to get Overlook to finally schedule the novel. Finding the book too large, they decided to split it in two, with The Great Ordeal scheduled for July 2016 and The Unholy Consult for early 2017.

However, the editor at Overlook who was handling the novel has since departed and Overlook have not assigned Scott a new one. With publication only five months away and the full editorial cycle not yet begun, the novel hitting that date is starting to look doubtful.

Overlook's lacklustre handling of what is apparently one of their biggest-selling novel series is rather strange, and boosts the feeling that this series should really have moved to Orbit USA, who have much greater clout and the ability to get the books on shelves and promote them better. Overlook have done a splendid job getting Scott to this point but, as I've said before, it's clear they can't take him to the next level. Hopefully they can get moving and we'll see The Great Ordeal in its original publication slot or as soon as possible afterwards.
Posted by Adam Whitehead at 10:49

This is unbelievable. Finally, we'd gotten a firm date, if only for the first half, and now it might get delayed. They're not even keeping Bakker informed as to what's going on. Man!

Incredibly frustrating. It seems they're failing Bakker on every level. It makes me wonder about these things at a contract level. How bad does a publisher have to get, or is it simply impossible to move elsewhere?

Wow, looks like there was some foresight in naming the novel. The Great Ordeal, indeed.

If and when these books finally come out, Bakker would be mad to stay with this publisher for any future novels. Getting beyond a joke now.

A classic example of how (some) publishers treat their authors and fans. Appalling. Here's a talented writer with a keen and expanding fan base, who has completed the work, yet his publishers won't publish it. Bizarre. Presumably he is in some contractual bind with Overlook and cannot move elsewhere, at least for this series.

Dammit Bakker just self-publish! You've got the fan base built at this point, why not collect 100% of the profits instead of 10% or whatever these no-talent tools at Overlook dish out