Marvel and Netflix have confirmed that Jessica Jones will be returning for a second season. The show, part of the Marvel Cinematic Universe, was released on 20 November 2015 and attracted widespread critical acclaim for its writing, acting, direction and unusually mature way of dealing with adult themes in a superhero setting. 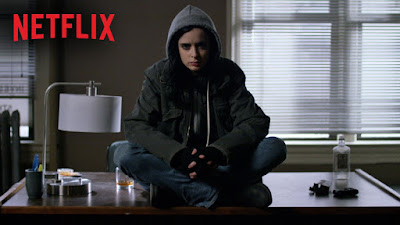 Jessica Jones is the second of five shows Netflix and Marvel are developing. Daredevil already aired its first season at the start of the year, and its second season will be released this March. The first season of Luke Cage will debut later this year. Iron Fist will likely debut next year, with the key characters from all four shows then joining forces in a Defenders mini-series, likely in 2018.

Netflix and Marvel have also indicated they are looking at expanding their series roster with a new series based on The Punisher. The infamous Marvel anti-hero has been featured in several films but nonve of them have really taken off. However, Netflix and Marvel are excited about the character starring in the second season of Daredevil, where he will be played by The Walking Dead's Jon Bernthal, and are actively discussing a new series featuring him. Whether the Punisher would then play a role in the Defenders TV series or would be completely unrelated is unclear.

Netflix and Marvel have previously hinted that Ghost Rider and Blade TV series could also be in in development, the latter possibly with the involvement of Wesley Snipes (who played the character in three films). However, so far those two series remain unconfirmed.

An airdate for the second season of Jessica Jones has not been announced, but assuming it starts filming in March or April, it could be released in November as with last year.
Posted by Adam Whitehead at 19:28

Not surprising. I'm behind on my shows and still need to watch Season 1. Also looking forward to "Iron Fist".

Punisher should easily be the best show of all the Marvel tv series. If not people should get fired.

With it's success, there's no surprise that JJ was renewed. What was surprising is the fact that The Punisher series is being worked on. They must really like Jon Bernthal's work on season 2 of DD. The way it's going, we might see it before the Defenders mini-series.

The article on Hollywood Report indicates S2 might not happen until after The Defenders as Netflix is contractually obliged to film the crossover series by a set date.