The world of Kharak, dominated by the vast Great Banded Desert, is dying. The Kushan people, crowded into the cities of the northern plateaus, are trying survive as well as their technology allows. But hope is kindled when a malfunctioning satellite discovers an unknown object in the deep desert. The initial scans of this "primary anomaly" hint that it may hold the key to the future of the Kushan people...and their distant past.

The Northern Coalition assembles a fleet of vehicles led by the carrier Kapisi and dispatches it into the desert. It must cross thousands of miles of unrelentingly harsh, arid territory to reach the primary anomaly...and along the way they will be hounded by religious fanatics, followers of the god Sajuuk, determined that the invaders will not reach their objective. 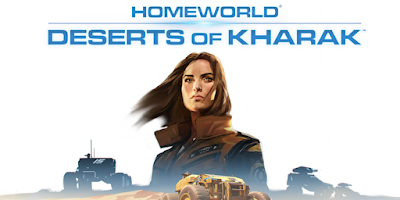 Deserts of Kharak - known during its lengthy development period as Shipbreakers - is a real-time strategy game that serves as a prequel to Homeworld (1999) and its sequels. Homeworld was set in space and was the first strategy game to really embrace three-dimensional movement, strategy and thinking. Your fleets could attack - or be attacked - from any angle and were persistent between missions: you units which survived one mission were what you had at the start of the next. This was quite advanced in 1999, when most strategy games were still firmly locked in the much more familiar mould of StarCraft, Command & Conquer and Total Annihilation. Homeworld was the first of a series of RTS games (along with the equally brilliant Ground Control and Hostile Waters) which tried to bring the genre kicking and screaming into the 3D world, with mixed success.

After Homeworld 2's release in 2003, the rights to the series became tangled up in legal issues. The original team at Relic which had made the Homeworld games left to start up a new company, Blackbird Interactive, and started a new project, a multiplayer-focused strategy game. When the Homeworld IP was bought by Gearbox and the original games remastered, Gearbox brought Blackbird on board to help and also allowed them to rework their game into an official Homeworld title, bringing things full circle.

Deserts of Kharak itself is both startlingly similar and strikingly different from the existing Homeworld games. As with the space games, you have a large mobile headquarters from which you build your units, research new technology and command the action. As the campaign proceeds, your command carrier is upgraded with additional shields, armour and weapons and becomes a formidable warship in its own right. You also get increasingly powerful units, starting with small, rapid dune buggies and escalating up to massive landcruisers armed with long-range cannons. Each mission usually requires you to explore areas, harvest resources, hold territory against enemy forces or reach a particular location by striking through enemy lines. You can dip in and out of a long-range sensor view to better control the action from afar, as well as close up through the wonderfully-designed vehicles and environmental effects. There is also the musical score from series veteran Paul Ruskay, which is amazing, and the atmosphere, which genuinely nails that Homeworld "feel" despite the different setting. 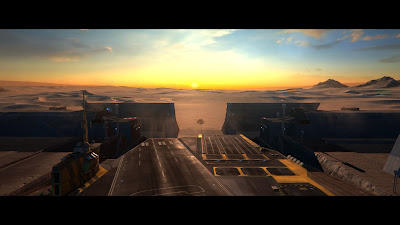 The differences are pretty obvious. Being set on a planet, the vertical axis plays less of a role. There are nods to it, with units on elevated terrain getting attack and defensive bonuses and air units providing late-game, decisive strikes and bombing runs. But this is more of a traditional RTS where you build lots of tanks, repair units and artillery and attack the enemy en masse whilst resources are gathered in the background. It's always made for fun, compelling gameplay and this is still the case here. The map environments are beautiful and the designers go to some lengths to break up the maps which could have been very samey, using different times of day and night, terrain features and enemy compositions to make things varied. Each of the 13 maps is well-designed and fun to explore, linked together by mission briefings, wonderfully-animated cut scenes (the 2D artwork which has been a staple of the series now layered over CG and video footage to create something interesting and original whilst still true to the series aesthetics) and crew log entries.

The pace of the game is also relaxed. When combat takes place it's usually fast, furious and harsh, but there are usually longueurs as you build up your forces and can plan your next move with some confidence.

The game does have its weaknesses. First off, you can't pause the game to move the camera around and plan you next move. This is a key ingredient from the original games and it's irritating to find it missing here. There's also the fact that the Unity-based engine is simply not as good as the actual core Homeworld engine itself (which Blackbird only got access to in the last year or so of development, way too late to switch to it), with units clipping through one another and there being significant scaling issues: your vast, imposing war machines are beautifully-designed and rendered, but feel like radio-controlled vehicles. What Blackbird have done with the engine, making it mimic the original Homeworld games, is nothing short of breathtaking, but it can't disguise the fact that it's less impressive technology. There's also no formation controls, you can't control the facing of your units and the strike force tech from Homeworld 2 is also missing, meaning that your units will scamper all off as fast as they can, breaking formation and letting the fast units engage long before the slow ones are even remotely in range. All of these weaknesses are individually bearable, but the combination of them makes for moments of genuine frustration. This frustration is intensified if you have played the original Ground Control, a seventeen-year-old game which has vastly superior UI, formation and facing controls, unit scaling and camera movement compared to Deserts of Kharak, which is all a bit embarrassing. There's also a fairly thin selection of multiplayer content, and the AI is rarely challenging.

These issues prevent Deserts of Kharak (****) (PC) from being the modern RTS classic that it could have been. As a spin-off from the main Homeworld franchise it is fun, entertaining and enjoyable. It certainly whets the appetite and shows that Blackbird more than have the chops for what should come next: a proper Homeworld 3.
Posted by Adam Whitehead at 19:23