Somewhat unexpectedly, MTV has bought the TV rights to Terry Brooks's Shannara series of fantasy novels. John Favreau, the director of the first two Iron Man films, is fuelling the adaptation and may direct the first episode. Smallville showrunners Al Gough and Miles Millar would helm the show on a week-by-week basis. Apparently, MTV has agreed a straight-to-series deal if they like the initial scrips, bypassing the pilot stage. 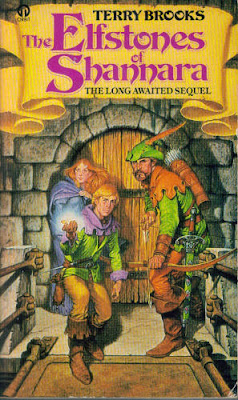 The plan is to adapt The Elfstones of Shannara, the second novel (the first, The Sword of Shannara, infamously sails a bit too close to the Tolkien winds) as the first season and proceed from there.

"The Shannara books are estimated to be the highest-selling un-adapted fantasy book series in the world."

Apart from The Wheel of Time, the Drizzt Do'Urden books and The Dark Tower, of course.

Not even remotely true. If the previous figures are accurate (26.5 million sales worldwide, 15 million or so in the USA alone), then Brooks has been outsold by Stephen King, Terry Pratchett, R.A. Salvatore, Christopher Paolini, Anne Rice, Stephanie Meyer, Charlaine Harris and George R.R. Martin have outsold him. If, as the article suggests, Brooks's sales are 26 million in the USA alone, that puts his world wide sales likely in the 40-50 million bracket. Even in that case, he's still been outsold by King, Pratchett, Rice and Meyer, and is at parity with Paolini.

Inaccurate reporting aside, this is interesting news. Avoiding The Swords of Shannara, which is both diabolically awful and 'similar' to Lord of the Rings, is a very good idea. The quality of Brooks's writing improves immensely after that first novel. However, given the quality of the source material (readable popcorn entertainment) and the creative forces involved (Smallville was watchable hokum at best), we're probably talking something a lot closer to Legend of the Seeker than Game of Thrones in tone and styling.
Posted by Adam Whitehead at 19:05

I still like Jon Favreau a lot--among other things, he's very good at casting and establishing interesting, likable characters. He is, after all, the one who insisted on Robert Downey Jr. as Iron Man. So maybe he'll lend a certain energy to this show, even though it sounds like utterly derivative fantasy drek. That's still enough of a novelty on TV that I'd probably watch if it's even half-decent.

There are no errors in the article since they're talking about the books being estimated to be highest-selling and Brooks being considered to be second-highest-selling; they'll just have to reconsider!

OK, seriously, they sure got some facts wrong. Coming to their defense, a similar announcement was posted today on Brooks' website (http://www.terrybrooks.net/2013/12/elfstones-at-mtv-with-jon-favreau-smallville-duo/), phrased differently but containing the very same factual errors - and marked as "press release". So I guess said press release is the source of the incorrect info. Which doesn't make it better, of course.

Here's hoping that the material is treated well. I guess there's good potential to turn this into an interesting and successful TV series. But MTV?

Think this could be great,but annoying how they beef up the books popularity.

I'm still trying to figure out how he didn't get sued over that first book. It's literally just a 13 year olds re-writing of LotR with the proper nouns changed.

Shannara, MTV, Smallville. Am I the only one who shutter at this combo?