The Princess and the Queen by George R.R. Martin

King Viserys I Targaryen has ruled the Seven Kingdoms for more than twenty years, presiding over a time of peace and prosperity. He has declared his heir to be his eldest child, his only surviving child from his first marriage, Rhaenyra. But after his death, his widow, Queen Alicent of House Hightower, and Lord Commander Criston Cole of the Kingsguard instead crown his oldest son as Aegon II. Rhaenyra rejects this as a coup and is herself crowned on Dragonstone. The Seven Kingdoms are divided, with the Starks, Arryns and Tullys declaring for Rhaenyra and the Lannisters, Baratheons and Tyrells for Aegon. This will be a civil war of not just armies and fleets, but also of dragons battling one another in the skies of Westeros. The Dance of Dragons has begun. 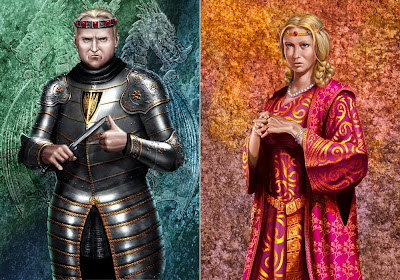 Aegon II and his older half-sister Rhaenyra Targaryen, the feuding claimants to the Iron Throne during the Dance of Dragons.

The Princess and the Queen is a 30,000-word, 80-page novella. It sits somewhere between an actual story and a narrative history, alternating between brief summaries of events and dramatic exchanges (of dialogue, steel or dragonfire) between characters. I must admit to some scepticism when the change was first announced (The Princess and the Queen replaces the fourth Dunk and Egg novella, which Martin has now delayed until after The Winds of Winter comes out), wondering if this was going to be nothing more than a bit of filler. Instead, I was surprised to find it a fairly gripping and interesting account of the civil war.

The Dance of Dragons has been oft-mentioned in the novels, but not in as much detail as other events such as Robert's Rebellion or the Blackfyre Rebellions. What has been established about it in the novels is fairly minimal, giving Martin the freedom to populate it with a whole host of new characters and political factions and set them against one another. As with the main series, Martin has little truck here with 'good guys' and 'bad guys': Rhaenyra's claim might be more sympathetic, but both sides have heroes and villains. The war takes several unexpected twists and turns, with the capital changing hands several times and major figures in the war dying unexpectedly. Both sides are also brutally betrayed at different times. In terms of tone, The Princess and the Queen reads like an ultra-condensed version of A Song of Ice and Fire itself.

The biggest difference to the main series is its use of dragons. At this point dragons are, if not commonplace, certainly reasonably established in Westeros. The Targaryen princes and princesses (and, controversially, some of the bastards) travel around on dragonback and they are often used in war. What is unusual is them being used to fight one another, and there are several brutal battles between dragonriders which are vividly described by Martin. There are also interesting descriptions of military engagements between conventional forces and dragons: the armies of Westeros and the Free Cities have had more than a century by this point to get used to dragons being around and the surprise and terror of Aegon's Conquest has passed. It is possible (if extremely difficult) to kill a dragon and that knowledge provides the downfall of several of the creatures.

Considering the short length of the story, Martin successfully embues the characters with life and motivations. Rhaenyra is proud and haughty, but also jealous and over-protective. Her husband, Daemon Targaryen, is a charismatic warrior, ruthless but also prone to bursts of romance and chivalry (though never to foolishness). It's also fun spotting future historical figures in their youth, such as Alyn Velaryon (who will grow up to be Admiral Oakenfist, partially responsible for Daeron I's successful invasion of Dorne).

The story certainly isn't perfect. The format means that this sometimes reads like a summary of what could have been (in a different life, or much further down the line) a fascinating duology or trilogy of novels in its own right. In addition, whilst Martin takes some effort to come up with new Targaryen names, there's still a few too many Daerons, Daemons, Aegons and Aemons (or Aemonds) wandering around to easily differentiate them at a glance, at least at first. Most notably, the story cuts off a little too abruptly with the war still not done. Considering the story's presence in the Dangerous Women anthology, I was expecting a greater focus on the battle of wills between Alicent and Rhaenyra, but this is a minor element at best in the story. Cutting it off after this element is resolved may be thematically correct, but as the theme was not dominant in the story it simply feels a bit random for the conflict to be left hanging. The World of Ice and Fire, due in 2014, will at least resolve this issue.

The Princess and the Queen (****) isn't just a stopgap, but a readable and entertaining story that expands on our knowledge of the Song of Ice and Fire world whilst also working as a narrative in its own right. More encouragingly, Martin apparently wrote a much longer version (almost 90,000 words) - of which this is an edited excerpt - in just a few weeks, showing that he can still put the pedal to the metal on writing when he needs to. Whether this means we can expect The Winds of Winter in a reasonable timeframe is still unclear, of course. The novella is published as part of the Dangerous Women anthology, available now in the UK and USA.
Posted by Adam Whitehead at 11:04

Email ThisBlogThis!Share to TwitterShare to FacebookShare to Pinterest
Labels: a song of ice and fire, george r.r. martin, the princess and the queen

I was also struck at how Martin was able to invent a whole new set of interesting (if not sympathetic) characters, making the Dance, as you say, seem like a condensed and more brutal version of the War of the Five Kings. Oh yeah, how could it be more brutal? They have dragons and mercilessly burn out the countryside: the Riverlands are like a lunar landscape by the end.

The problem of course is that it's only an edited fraction of the total story of the Dance that he wrote in one great burst. Over on Westeros.org Ran has been explaining stuff that simply got cut for time.

So it's a "glass half full" situation: these new revelations about "The Dance of the Dragons" era are outstanding, I mean you get mentally drunk on all of this new information. On the other hand, "The Princess and the Queen" in its current format is a short and heavily edited account of the full story - so on the one hand you're happy for this new story, on the other hand it can be choppy and obviously, doesn't go to the end of the war. Well, with full knowledge that we'll get the whole story a year or so from now, I choose to see it as "half full" and I'm just glad for what we have.

The other thing which might frustrate some, but which I thought interesting, is that this *is not* an objective third person POV -- it seems like a historical text but Martin is careful to emphasize that even even authors trying to be objective have to deal with conflicting accounts.

You have to be paying attention to notice this, but there are many points when the maester writing TPATQ will use signal words that he's using a source that might not be reliable for a specific fact: "well, I actually have three sources for how that major character died, each completely conflicting with each other."

Ran over on Westeros.org confirmed that at least several of these are indeed pure propaganda: specifically, the idea that Aegon II started out as an unwitting pawn who didn't even want to take the crown until his mother talked him into it? Pure fabrication by Aegon II loyalists.

The question I was left with after enjoying this so much is: can The Dance of the Dragons sustain its own TV project? Maybe not a "TV series" but as a miniseries? Or two or three "miniseries" back to back? (consider that Game of Thrones itself is technically sort of a very long miniseries - the lines blur).

Or we could think outside of the box: what about some sort of animated project? (Think Animatrix or Halo: Legends).

They did mention Rhaenyra - briefly - in Season 3 of Game of Thrones. I wonder very much what the upcoming Season 3 blu ray "Histories and Lore" animated featurettes will say about the Dance - probably not much after such a brief statement.

At any rate the real heroes of the Dance are, of course, the Dragons. It is *brutal* hearing about one of these majestic beasts dying - at the end of the day they're just big animals being forced to fight. They even make you feel bad for *Aegon II's* dragon Sunfyre, which gets really beat up as the story progresses (my favorite was Caraxes).

I didn't find Rhaenyra's cause the least bit sympathetic, especially after Blood and Cheese. Did you read any of the other stories in Dangerous Women? I've been wondering what the stand outs are.

One thing I noticed that Martin has established in the novella that significantly changes the ASOIAF storyline is that Dany's dragons will need to be combat ready to overcome their small size and youth against large armies. Unless of course she finds a hundred year dragon like Vhagar lying around...

Rhaenyra probably had the stronger claim to the throne, but agreed that you quickly lose sympathy for her (or either side, really) after the Blood and Cheese incident.

As for Dany, the small size of her dragons will likely be offset by the enemy not having any dragons at all. Other dragons showing up is also not impossible: Nettle's dragon Sheepstealer is young enough to still be alive, and maybe a couple of others (Silverwing is also unaccounted for, though she was decades old at the time and likely dead now, if 200+ is old for a dragon like Balerion or Vhagar).

That sounds like the war between Mathilde and Stephen for the English crown, now with Extra! Dragons. :-)