Spaced, the greatest sitcom about science fiction and fantasy fans ("geeks," if you will), turns 20 years old today. 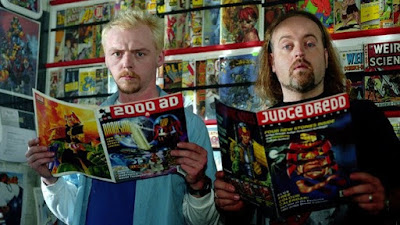 Created by Jessica Hynes, Simon Pegg and director Edgar Wright, Spaced is set in London and sees the twenty-something Tim Beasley (Pegg) and Daisy Steiner (Hynes) as flatmates who pretend they're a couple to secure an astonishingly reasonable London flat from their ex-rock groupie landlady Marsha (Julia Deakin). The other regular characters include Tim and Daisy's pretentious artist neighbour Brian (Mark Heap), Daisy's fashion-obsessed friend Twist (Katy Carmichael) and Tim's best friend Brian (Nick Frost), a disgraced member of the Territorial Army who was kicked out after commandeering a tank and trying to invade Paris before being distracted by EuroDisney and subsequently apprehended on Space Mountain. Recurring characters include Tim's sworn nemesis Dwayne Benzie (Peter Serafinowicz) and his comic shop owner boss, Bilbo (Bill Bailey), who at a key moment is forced to fire Tim for hurling over-the-top abuse at a young customer for trying to buy Jar-Jar Binks merchandise (Tim's subsequent boss then fires Tim when he discovers his dislike of Babylon 5).

The show's storylines revolved around the characters' interpersonal relationships, such as Brian and Twist's growing romance, and also around pop culture references. This included episodes inspired by everything from Resident Evil 2 to One Flew Over the Cuckoo's Nest to The Matrix to John Woo. However, the series maintained a strong comedic edge, mining the laughs from the characters and situations they found themselves in so even non-geeks could enjoy the show (the cast used Julia Deakin as their litmus for this, as the only geek reference she got was a Close Encounters of the Third Kind mashed potato gag). This also helped the show age gracefully, even though a number of shows and movies the series referenced have since fallen into obscurity.

Spaced only aired two seasons in 1999 and 2001, totalling fourteen episodes, but of course its impact was seismic. Hynes, Serafinowicz, Wright, Pegg and Frost reteamed for the movie Shaun of the Dead in 2004 (which by coincidence celebrates the 15th anniversary of its US release today) and the latter three then went on to make Hot Fuzz (2007) and The World's End (2013). Pegg also played Scotty in JJ Abrams' Star Trek movies and most recently appeared in Amazon's The Boys, whilst Frost recently had a regular role on Into the Badlands. Serafinowicz recently starred in Amazon's The Tick and Hynes had a starring role on Years and Years. Wright has also had a successful directing career with the critically-acclaimed movies Scott Pilgrim vs. the World, Baby Driver and the forthcoming Last Night in Soho. He has also worked as a writer on movies including The Adventures of Tintin and Ant-Man. The show also featured before-they-were-famous turns by British comics from David Walliams to Ricky Gervais.

Spaced remains the finest sitcom about pop culture, challenged only by Community (Dan Harmon had never seen Spaced, but after viewing it had to admit there must have been some kind of weird shared cultural osmosis). It never looked down or sneered at SFF fandom, instead promoting the idea of fans as creative and warm-hearted individuals. The show also still looks incredible, Wright's fast-cut editing and dynamic camera moves making it look like a film. Why more sitcoms (British or otherwise) have not taken their cue from this show remains a mystery.

So far, the creators are resisting the urge to create a new series (although acknowledging they have talked about it), instead preferring to leave these characters as we last saw them: happy, optimistic and ready for the future. If you haven't checked out Spaced, it's well worth catching up with now.
Posted by Adam Whitehead at 20:41