With Joe Abercrombie's first First Law book in eight years, A Little Hatred, in stores now, I thought it was worthwhile revisiting the setting for the books with a refreshed map and timeline.

The map shows all the lands that lie within the known Circle of the World. Midderland, the island in the centre, is the heart of the Union and the location of Adua, the capital city. Styria, the setting for Best Served Cold, is the island or subcontinent to the east. The North lies to the, er, north with the Orsrung Valley (the setting for The Heroes) located in the mountains and hills south of Carleon. The Far Country, the setting for Red Country, is located to the west of Midderland. Dagoska and the Gurkhal Empire are to the south.

For this map I added the city of Valbeck, a vital location in A Little Hatred. The city lies inland, north of the lands of Isher and somewhat north of Adua, although there's not a huge amount in it.

Also at the time of A Little Hatred, Styria has become a unified nation-state with its capital at Talins (to the disquiet of the Union), the Old Empire has been (somewhat) reunified and the Gurkish Empire has fallen to internal dissent and civil conflict, although for the purposes of clarity on the map it can still be said to exist. Dagoska is now more of an independent city-state, although it remains reliant on the Union for its economic status (as seen in the short story The Thread), so I have marked it as remaining part of the Union. 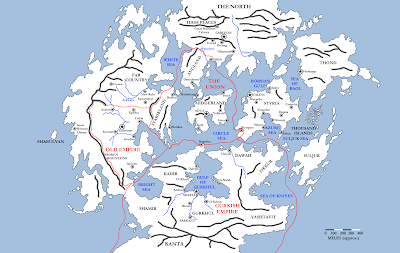 A map of the Circle of the World. Please click for a larger version.

The timeline of stories and books is as follows, with novels in bold and short stories in italics. These short stories can all be found in the new First Law collection Sharp Ends, which was published this week.

Previous lists and Sharp Ends list "Made a Monster" as taking place in 570. This was an error, as noted by Joe Abercrombie, and the book has to take place around 565 to better fit the narrative references in the books themselves. A precise date for "The Thread" (the short story that accompanies some editions of A Little Hatred) is not given, but it appears to be relatively shortly before the events of the novel.

Note: this is an updated version of a post previously posted here.


Thank you for reading The Wertzone. To help me provide better content, please consider contributing to my Patreon page and other funding methods, which will also get you exclusive content weeks before it goes live on my blogs.
Posted by Adam Whitehead at 13:31

Love the new map! I'm just wondering, didn't the Union expand up to the Sokwaya River at the end of Red Country, pushing the border of Starikland further west in the aftermath? Otherwise, that's the only thing I can think of which would have changed on this map.

I think this order needs to be corrected. Best Served Cold starts with Caul Shivers reflecting on letting the Bloody Nine go, while Red Country ends with Caul Shivers throwing his brother's dagger into the dirt at Lamb's feet (Logen) and giving up on vengeance. So how can he reflect on giving up on his brother's revenge in 579 if he does not give up on the pursuit until 590 in your timeline?

"Anonymous said...
I think this order needs to be corrected. Best Served Cold starts with Caul Shivers reflecting on letting the Bloody Nine go, while Red Country ends with Caul Shivers throwing his brother's dagger into the dirt at Lamb's feet (Logen) and giving up on vengeance. So how can he reflect on giving up on his brother's revenge in 579 if he does not give up on the pursuit until 590 in your timeline?

--Caul Shivers gives up on vengeance a lot. The first time, when he's in Styria and is talking about letting the Bloody Nine go, he's talking about how he leaves the throne room in the North when Black Dow betrays Logen. The timeline is most definitely correct. Every book even talks about events in the last book, like Cosca talking about Murcatto or w/e.