SF&F Questions: Does human religion still exist at the time of Star Trek?

Star Trek is the most extensive live-action science fiction franchise of all time, spanning 762 episodes (as of July 2019) across seven distinct television series, along with thirteen theatrical movies and countless novels, video games and comics. The Star Trek timeline extends from the near future to more than a thousand years in our future. 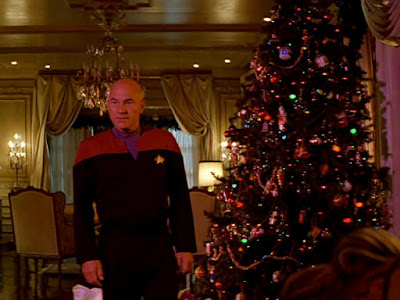 In all of that time, Star Trek has somehow managed to sidestep the question of religion, specifically human religion. Alien religions are covered, sometimes in exacting depth, with multiple episodes focusing on the religious beliefs of races including the Bajorans and Klingons, and the ideological attitude and spirituality of the Vulcans. But the show tends to shirk away from answering questions such as whether humans still believe in God in the 23rd and 24th centuries.


Word of God
Star Trek creator Gene Roddenberry, a committed atheist, secularist, optimist and humanist, was unequivocal on the matter: he believed that by the time of Star Trek (the 23rd and 24th centuries), human beings would have come to the realisation that religion was outdated superstition and would have embraced a philosophical and ideological point of view that rejected both religion and the pursuit of money as the motivating factors of the human race.

Of course, such a viewpoint was fairly radical for 1960s American television, and it seems that Roddenberry didn’t enforce this POV on his writers, who frequently adopted more traditional viewpoints, with characters affirming a belief in God at several points. Later Star Trek producers Brannon Braga and Ronald D. Moore confirmed that Gene’s tenet on religion remained in full force on the 1990s Star Trek shows (The Next Generation, Deep Space Nine and Voyager). “On Roddenberry's future Earth, everyone is an atheist. And that world is the better for it.”

In addition, it appears that humanity has abandoned the use of the Anno Domini (After Christ) or Common Era calendar in favour of non-denominational Stardates instead. In fact, it took twenty-two years after the airing of the first episode of Star Trek for a current year to even be mentioned in this system (in The Next Generation’s The Neutral Zone, when the current year is identified as 2364 AD). 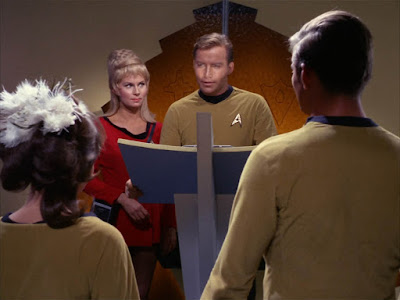 Evidence in The Original Series
In Balance of Terror it is revealed that the Enterprise has a non-denominational chapel on board where religious ceremonies can be held, including weddings and funerals. This suggests that human religious faith still exists and all beliefs are catered to on the ship.

However, in Who Mourns for Adonis? Kirk seemingly contradicts this by saying that polytheistic religious beliefs are considered outdated as “we find the one [god] quite sufficient.” This seems to suggest that Hinduism and any belief not centred around a single god (such as Buddhism) no longer exists. It also suggests that most humans still believe in a single god at this point in history.

In Space Seed, Lt. McGivers reports that Khan is of Indian descent and may be a Sikh, although when he wakes up, Khan does not identify himself with any religious belief. However, given that Khan originates from the late 20th Century, that doesn’t mean that the Sikh culture and faith is still extant in the 23rd Century.

In Bread and Circuses, Septimus asks the crew if they are “Children of the Sun,” to which McCoy replies, “If you’re speaking of worship of sorts, we represent many beliefs.”

In That Which Survives, navigator Lt. Rahda is shown wearing the bindi (a traditional Hindu symbol on her forehead), contradicting Who Mourns for Adonis?


Evidence in the movies
In Star Trek II: The Wrath of Khan, a funeral is held for Spock after his death in the battle with Khan. The funeral is apparently non-religious, with no prayers offered, although Scotty does play the 1779 Christian hymn “Amazing Grace” on his bagpipes. It should be noted that as a Vulcan (a half-Vulcan, but raised on the Vulcan homeworld as a full Vulcan), Spock would presumably not have requested any kind of human religious funeral anyway. Several characters also exclaim “My God!” at various points in the film, but Dr. McCoy also refers to the story of Genesis as “a myth.”

In Star Trek V: The Final Frontier, religious faith and fundamentalism is a key theme and it is even hinted that the hostile alien entity imprisoned at the centre of the galaxy may be the inspiration for numerous real-world religions (as Kirk memorably points out, “What does God want with a starship?”).

In Star Trek VI: The Undiscovered Country, Captain Sulu yells “My God!” upon seeing the shockwave from the Klingon moon Praxis approaching his ship, the Excelsior.

In Star Trek: Generations, Picard celebrates Christmas, although Christmas is of course considered a secular holiday by many.


Evidence in The Next Generation
In Who Watches the Watchers the crew of the Enterprise interfere with a preindustrial civilisation and inadvertently create a religion based around their activities, to Picard’s evident horror. He describes the age of religious belief as a primitive “setback.”

Several weddings take place in the series, most notably the marriage of Miles and Keiko O’Brien in Data’s Day, but these are non-denominational weddings. However, in the same episode Data notes that the Hindu Festival of Lights is currently ongoing and there will be celebrations of this on the Enterprise.

In Sub Rosa, Dr. Crusher’s grandmother is given a Catholic funeral.


Evidence in Deep Space Nine
In The Ship and The Sound of Her Voice, wakes take place. However, they are not overtly religious ceremonies.

In the episode Penumbra (taking place in AD 2375), Captain Kasidy Yates says that her mother would expect her to be married by a minister. 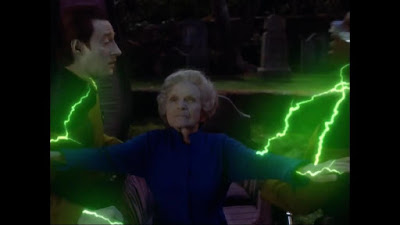 Evidence in Voyager
Commander Chakotay is of Native American descent and frequently mentions his spiritual beliefs.


Evidence in Enterprise
Taking place a hundred years before Kirk’s times, Enterprise features much more overt references to religion still existing. Dr. Phlox is a student of human religion and in Cold Front mentions taking mass in St. Peter’s Square and visiting a Buddhist monastery in Tibet.


Evidence in other materials
Various Star Trek books and comics make more overt references to religion still existing: A Small Matter of Faith focuses on the career of a Starfleet chaplain and Guises of the Mind features Catholic, Jewish, Buddhist and Hindu believers in Starfleet. The video game Star Trek: 25th Anniversary features a group of religious separatists living on a breakaway colony, and Kirk can respond to their beliefs either respectfully or sardonically.

However, none of the Star Trek comics, video games or novels are canon, so these are not germane.


How could religion disappear in just 240 years?
Given that many of the world religions are thousands of years old, the idea that religion may disappear in just the next 240 years appears to be fanciful. Star Trek writer Ronald D. Moore notes that he considers it to be impossible, but could not overrule Gene Roddenberry’s rule.

One possibility is related to the fictional World War III. In Star Trek’s timeline, WWIII erupts in 2026 and rages until 2053, although there are apparently lulls and ceasefires during the conflict. The war involved both conventional military activity and nuclear strikes, which eliminated many of the world’s major cities. One reason San Francisco becomes apparently the biggest and most important city in North America in the Star Trek timeline is that many of the other major cities of the continent were destroyed. The death toll from WWIII is about 600 million.

It is possible that this war was so devastating that entire religions were wiped out, or driven underground or to the point of extinction and that the post-WWIII rebuilding process, especially after First Contact with the Vulcans in 2063, was undertaken specifically with the idea of uniting humanity under a single humanist banner.

It is also possible that the discovery of intelligent alien life resulted in a massive philosophical shift on Earth which contributed to the decline of religion.


So, has human religion disappeared by the time of Star Trek?
Based on multiple data points, it appears that religion continues to endure even by the time of Star Trek: The Next Generation and Deep Space Nine: Dr. Crusher’s grandmother is a Catholic, Captain Yates and her mother appear to be Christians of unknown denomination and a Hindu religious festival is observed on board the Enterprise-D. There are also Hindus serving in Starfleet at the time of The Original Series.

As a result, we can conclude that although religious worship among humans is much less widespread in the late 24th Century compared to now, it remains extant and people do continue to follow the major world religions, albeit in much smaller numbers than at present.

Thank you for reading The Wertzone. To help me provide better content, please consider contributing to my Patreon page and other funding methods, which will also get you exclusive content weeks before it goes live on my blogs.

I wouldn't say that the idea that 240 years from now religions are all but disappeared is entirely fanciful.

240 years ago, atheism was just starting to take a hold in philosophy (e.g. in the works of Voltaire and Kant); Feuerbach advanced it further 60 years later but it arguably only was in the second half the 20th century that societies in Western Europe moved into an atheistic direction. Yet, now, some three generations later religions are on the way out in many Western European countries (except for the influx of more religious migrants from developing countries, see below).
If one extrapolates this development 240 years might be way too long, actually. I could well imagine religion to be marginalized in Western Europe in less than a century.

Admittedly, the picture is quite different in the developing world, and the US which is an outlier in that respect. I wouldn't be confident to make a projection how these countries will look like in 2½ centuries from now.
There seems to be a negative correlation between education and standard of living on one side and religiosity on the other. If one wants to engage in believing in a utopian scenario (as Star Trek apparently does) that the world comes together and eliminates poverty, this should, if my conjecture is accurate, accelerate the decline of religions.

Anyway, just wanted to point out that 240 years (≈ 10 generations) is quite a long time for societal changes considering how fundamentally our world has changed half the time. Of course, I might be entirely wrong! ;-)

Thanks for this interesting article.
To me, it seems that the various Star Trek formats are somewhat inconsistent regarding the survival of Earth's religions.

Oh, and one last thing. Saying "oh my god" isn't necessarily a sign of religiosity. I would argue that already now, this has become an idiom that is not any longer connected to a belief in a deity.