According to an exclusive story from Entertainment Weekly, HBO are close to ordering a second Game of Thrones spin-off pilot. This second pilot would be based on the Dance of Dragons, the devastating civil war that almost wiped out the Targaryens and did kill most of their dragons about 170 years before the events of the main series. 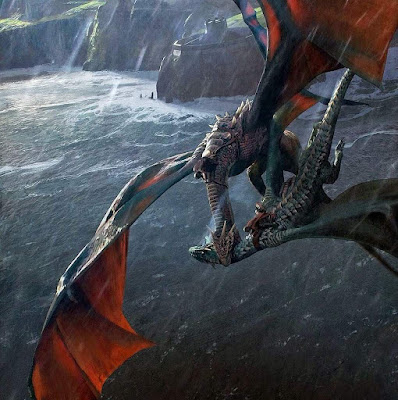 Ryan Condal, who was recently developing Amazon's Conan the Barbarian TV series before they passed on it, is developing the pilot. According to some rumours, he may have taken over development of this project from Bryan Cogman, who was working on a Game of Thrones project before being poached by Amazon to work on their Lord of the Rings: The Second Age series. This remains unconfirmed.

HBO is currently assessing the completed pilot for the first spin-off, with the working title Bloodmoon, before deciding to move forwards with a series order. It is unclear if this second show means that the first is dead, or they will consider having two spin-off series on air at the same time.
Posted by Adam Whitehead at 21:58

I would expect some of these shows will have shorter runs. I have trouble seeing them do multiple 7 season game of thrones runs. What do you think?