A band of friends meet at the Inn of the Last Home in the town of Solace. Five years ago they went their separate ways, searching for evidence of the lost gods. Their findings were inconclusive, but their reunion is interrupted by the news of vast armies allied with dragons on the march and the arrival of strangers bearing a crystal staff...and the long-lost power of healing. The continent of Ansalon is riven by war and it falls on this band of heroes to save it from destruction. 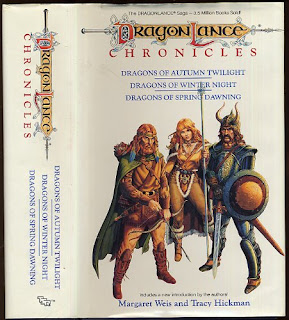 The Dragonlance Chronicles trilogy is one of the most famous works of epic fantasy of the 1980s. Published in 1984 and 1985, the trilogy and its immediate sequel series (The Dragonlance Legends) have together sold almost 30 million copies, making them one of the biggest-selling series of that decade. Millions of fantasy readers started out in the genre by reading these novels.

The question arises, then, is it a good idea to revisit these works as an adult and risk ruining nostalgic teenage memories in the process?

The answer is mixed. The paradox at the heart of enjoying the Dragonlance Chronicles is what age group it's actually aimed at. The generally jovial tone (even when quite dark things are happening), the casual dialogue (this is a trilogy where medieval fantasy characters say "Yeah!" a lot) and the extremely breezy pace make this feel like a series aimed at children. I don't mean YA, I mean 7-10 year olds. The prose is simple and easy to read, and it feels very much like a work aimed in writing style at the same kind of audience as The Hobbit. There's moments of whimsical humour, stirring action and intriguing worldbuilding which do withstand comparison with Tolkien's work, despite the less-accomplished writing.

However, there are moments when the series abruptly goes much more adult. There are several sex scenes (albeit mostly of the "fade to black" kind) and female characters are threatened with sexual assault on a fairly regular basis. Tanis Half-elven also can't even meet a stranger on the road without carefully explaining how his mother was assaulted by a human man, leading to his conception and outcast status from both communities. The trilogy is also painfully 1980s in how it tries to have both strong female characters (Laurana, Tika, Kitiara, Goldmoon) and then gets them into situations of undress, or wearing revealing armour or clothes (Tika, at least, gets to make some wry observations on this that makes me suspect Margaret Weis was rolling her eyes as she wrote to market requirements). There's also a quite spectacular amount of violence, including characters being beheaded, turned to stone or set on fire on a fairly regular basis, and some psychological horror in the form of Berem, who is cursed to die and live again so often that he is going insane.

If you can overcome the tonal dissonance - the gap between the lightweight, juvenile writing and sometimes darker, more adult content - then it's possible to enjoy the Dragonlance Chronicles as a fast-paced, popcorn read. The trilogy does have another key feature (or bug) which is that it is an attempt to adapt no less than twelve Dungeons & Dragons adventure modules into a coherent story. Several times the narrative cuts away from our heroes embarking on another side-quest only to come back to them after that quest is completed, leading to the heroes thinking wistfully back on adventures that the reader never experienced (such as the journey to Ice Wall Castle, or Raistlin's completely out-of-nowhere return to the main story in the closing pages of the third book). This does make the story feel somewhat incomplete. It also means that the stories are extremely fast-paced: the Chronicles trilogy features a bigger story and more characters and events than The Lord of the Rings in about 50,000 fewer words. Some will enjoy the breakneck pace, others may lament the lack of character and plot development this results in.

The Dragonlance Chronicles trilogy (***) is fast-paced, fun and easy to read. It's also simplistic, juvenile in tone and has not aged fantastically well. Truth be told, there's much better options available for both adult and children fans of fantasy these days. But if you can overlook the issues, there is still some fun to be had in revisiting Tanis, Raistlin, Caramon, Flint, Goldmoon, Riverwind, Tas, Kitiara, Sturm, Laurana, Gilthanas, Lord Soth and the rest of this memorable bunch of archetypes. The trilogy is available now in the UK and USA.
Posted by Adam Whitehead at 18:51

I remember buying the first Dragonlance Chronicles book, Dragons of Autumn Twilight, when I was 9 or ten (definitely still in primary school). I'd found a crumpled bundle of notes on my walk back from the library- £30, a fortune back then, and wanted to spend it on books. I've still got the books knocking around somewhere and unless my memory is playing tricks on me, the small, densely packed typeset was more of a hindrance to reading it than the style of the prose. I remember it being harder going than Stephen King, which I also started around the same time.

There sometimes is an astounding amount of violence in children's literature, most notably in fairy tales. Take Red Riding Hood, for example, where at the end the wolf gets its belly sliced open and filled with stones which make him drown. Pretty drastic, IMO. Or one of the evil stepmothers (was it in Snow White?) whose punishment is to keep dancing in red-hot metal shoes until she drops dead.
Yet, children don't seem to be scarred for life hearing these stories.

I guess the question is how the violence is being presented.

Anyway, this quite cruel fairy tale violence came into my mind when reading your remark about violence. Otherwise I fully agree.
It's a while that I read the novels but they never struck me as books targeted at an audience under 10.