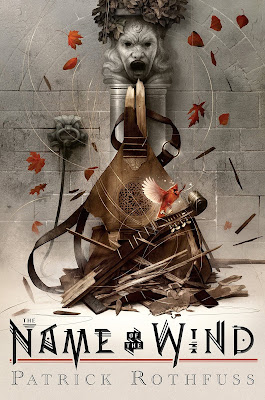 Rogers announced the completion of the writing on Twitter, and that he is now working on revising the overall season arc to make sure it all hangs together.

Showtime greenlit a TV series that will serve as a prequel to The Kingkiller Chronicle last year, although Rogers has been working on the project since 2016. The series is expected to be set decades before the novels and will feature Kvothe's parents as important characters. Lin-Manuel Miranda is serving as executive producer and composer for the TV series, and has already delivered several songs for the first season.

A trilogy of movies which will directly adapt the books is also in development, but suffered a blow when director Sam Raimi, who was being courted for the role, chose to move on to other projects. Without a major director helming The Name of the Wind, it's less likely that the project will move forwards. However, with the third and concluding novel in the series still unpublished, time is not a critical factor at the moment.

Rogers' previous credits include writing or co-writing the movies Catwoman, The Core and Transformers, and working on TV series such as Leverage, The Librarians and The Player.

According to Rogers, the first season of the show will consist of ten episodes. It will start filming before the end of this year for transmission on Showtime in 2020. The Kingkiller Chronicle is part of Showtime's aggressive plan to reassert themselves in the genre TV space, where they've been outshone by HBO (Showtime rejected the Game of Thrones pitch in 2007, presumably to their regret), Starz and AMC in recent years. As well as Kingkiller, they are working on a big-budget Halo TV series which is in the casting phase.
Posted by Adam Whitehead at 13:25

Adaptations should not be allowed until the source material is completed. I will not touch anything Kingkiller until Book 3 is out.

This is the type of show you make after having had a sucessfull movie or two. I think they have overestimated the vallue of this property at this point in time. I dont see how this is going to be a sucess.

I would give a lot of money to Patrick Rothfuss so he can be super motivated to create a grand finale for his chronicles and then spend a lot of time on making sure that the series are faithful to the books.

I wonder which will be finished first - Kingkiller 3 or A Song of Ice and Fire 7? Either way, I won't be holding my breath. - Ian