Record of a Spaceborn Few by Becky Chambers

Several centuries ago, Earth was verging on becoming completely uninhabitable. The survivors fled the planet in a fleet of thirty enormous space arks, the Exodus Fleet, whilst others sought survival in primitive colony domes on Luna, Mars and Titan. Years later, humanity was contacted by the alien alliance known as the Galactic Commons and welcomed as a member, but rather than abandon the Exodus Fleet for a planet, most of its complement remained behind. The remarkable spaceborn civilisation continues to survive in deep space...until a terrible accident makes it clear how tenuous their existence is. 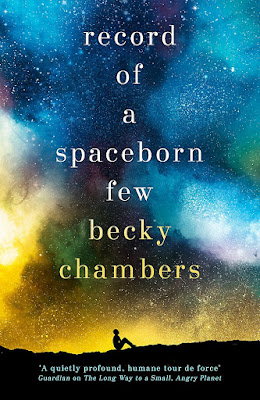 Record of a Spaceborn Few is the third book in Becky Chambers' Wayfarers series, following on from The Long Way to a Small Angry Planet and A Closed and Common Orbit. It only shares a setting in common with those earlier books and a very tenuous character connection (far moreso than the previous novel), so can be read completely independently of those books.

What it does share is Chambers' enjoyable, laidback writing style, her attention to detail and gift for crafting interesting characters with some depth. Unfortunately, it also shares her tendency to focus on extremely "nice" characters and neglect any kind of over-arcing narrative. This isn't necessarily a bad thing - SF novels which eschew explosions and people running around lots in favour of worldbuilding and atmosphere are all too few - but it does feel like this time we've been invited back to visit the Galactic Commons, only for there not being very much going on when we arrive.

A Closed and Common Orbit worked because of the very tight character focus on just two protagonists and how it explored two timelines in tandem. The Long Way to a Small Angry Planet worked because of its exploration of the whole crew of a small ship and how they come together to overcome a series of challenges. Record of a Spaceborn Few doesn't really have the same kind of engine driving it. Instead, it feels like a series of interlocking short stories as we flip between six characters in different parts of the Exodus Fleet. There's a human who's arrived on the Fleet from one of the colony worlds and tries to fit in; a corpse disposal specialist who has a huge amount of respect for the importance of the job in the community; an ageing archivist; an alien visitor keen to learn more about the Fleet; a teenage boy trying to escape the society; and a mother and worker trying to make the best of life in the fleet for her family.

Individually these are interesting stories, which are brought together by a surprising event towards the end of the novel, but beyond that there isn't much connecting them together. The whole point of a Wayfarers novel at this point is reading a slow-paced, well-characterised book lacking the blood and lasers of more familiar space opera, but this one feels so laidback it is bordering on falling asleep, and the book never really comes alive because of it.

Record of a Spaceborn Few (***) is readable and has some interesting characters, but it lacks much of a kind of narrative drive. As an exercise in worldbuilding and establishing more information about the Galactic Commons, it's very good (helped by an appendix), but as a novel it lacks cohesion and tension. It is available now in the UK and USA.
Posted by Adam Whitehead at 18:39